Today, I’ll finish the disassembly we started in the last report. I stopped at the point where all the parts were free to come out. Now, we’ll remove the barrel to get the piston out because the two are connected by the cocking link. The link cannot be removed from the baseblock easily, so the barrel has to come out to allow the other end to be disconnected at the piston.

Remove the pivot bolt
To take the barrel off, first remove the pivot bolt. Remove the locknut on the right side of the gun, then the bolt can be removed. I found a lot of tension on the bolt from the locking latch, so I’m looking into whether that is normal or not. In my experience, the latches have worked a little easier on other guns, but those were all older models that were well broken-in. 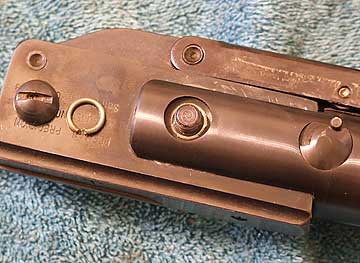 The pivot nut and lockwasher are removed from the right side of the gun. 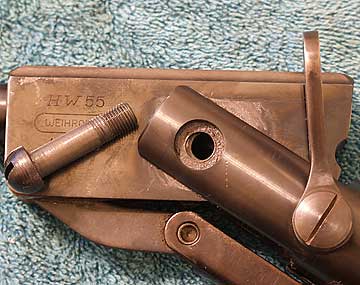 Next, the pivot bolt is removed. In this case, I unlocked the barrel latch to ease the tension on the pivot bolt. There’s telltale moly visible from a tuneup.

Once the pivot bolt was out, there was no longer any doubt that this rifle has been tuned after it left the factory. The baseblock and pivot bolt are covered with what looks like Beeman M-2-M moly grease.

The barrel comes off
The baseblock now easily slides out of the spring tube forks, which releases tension on the articulated cocking link. You can now slide the link, with its integral cocking shoe, up to a widening on the cocking slot, where the shoe can be removed from the mainspring tube. The barrel and spring tube are now separated. 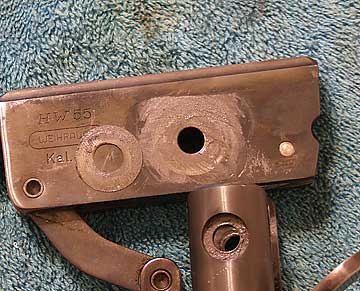 See the thin thrust washer that fits between the baseblock and the mainspring forks on both side of the gun? It’s been greased with moly which is proper for a tuneup. 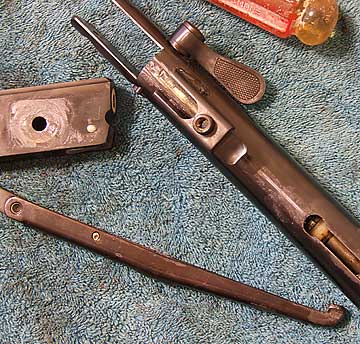 Observations
The piston has a new type parachute seal. That I expected. The mainspring has what looks like a Delrin rear guide–also expected, as well as a short “top-hat” front guide made of Delrin. That was unexpected and a new one for me. It looks like a factory part, but I’ve not seen another like it. Now that I see the inside of the gun, I can say that whoever did the tuning knew his stuff. Maybe the mainspring kinked after he closed her up. However, the failure to adjust the trigger to even standard Rekord performance, to say nothing of what it is capable of, still seems strange for someone who knows what he’s doing. 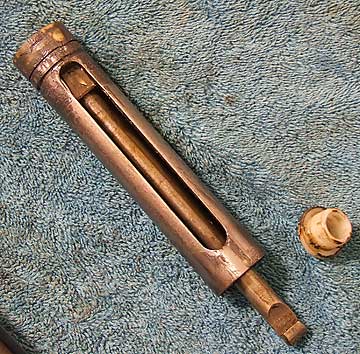 The piston has a new parachute seal as expected and a Delrin front spring guide that wasn’t expected.

The gun is now fully disassembled. The job took about 10 minutes, start to finish, though I spread it over two reports to show the details. I’ll now do the following:

1. Clean and adjust the trigger.
2. Select a new mainspring and fit it to the gun.
3. Adjust the locking lever for less tension.
4. Lubricate all parts and assemble the rifle.

When the job is done, the shooting behavior should feel very different.