Today, we’ll finish the report of the Evanix Renegade pistol with the accuracy test. Thanks for being so patient. The weather and some other duties made me postpone the test until yesterday. The day was near-perfect, with only a slight breeze that didn’t get above 5 m.p.h.

While the day was perfect, I wasn’t! I left my shooting table at home, so I had to improvise a rest. I put the sandbag over the back of a chair and rested the gun on that. It worked fine and was as steady as it gets, but it sure looks odd! 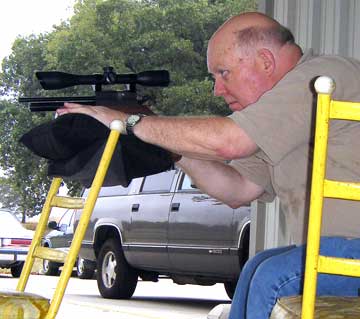 This may not look comfy, but it was actually a very solid rest. Note how far back my sighting eye is from the eyepiece. That’s the long eye relief scope at work.

The scope I mounted is a Leapers UTG 4×40 Tactedge with long eye relief. That allows me to hold the pistol somewhat forward instead of putting my eye up to the screen. Of course, I had to get used to only 4x magnification; once I did, it seemed to do the job. Remember, deer hunters shot at 100 yards with nothing more than 4x for decades! And, this scope is one of the clearest, most parallax-free you can find. While I would be happier with double the power, this is a fairly good match for the pistol. 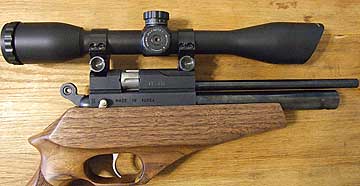 Eun Jins were first
The first pellets I tried were Eun Jins, based on their performance in the velocity test (part 2). I would have thought they would have been okay, because they gave an average of 610 f.p.s.–but they weren’t. 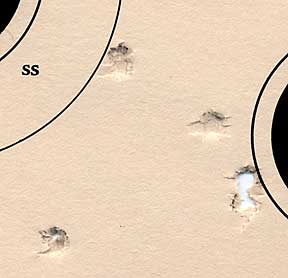 Not only is this a large group for only 25 yards, several of the pellets appear to be tipping as they pass through the paper. The pellet on top is the most evident. That’s an oval hole if ever there was one.

The Eun Jins were not fully stabilized, as evidenced by the oval holes they cut in the target. They also grouped around 2″ at 25 yards! Time to look elsewhere.

Next came Kodiaks
Beeman Kodiaks were next. They developed an average 692 f.p.s. for an average muzzle energy of 22.34 foot-pounds–about what we expect from a really great-shooting RWS Diana 48 in .22 caliber. I knew from the first group that this is the pellet for the Renegade pistol. 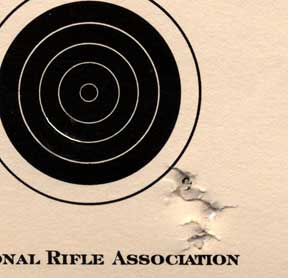 Beeman Kodiaks grouped very well at 25 yards. This group of 4 is about a half-inch. That’s with an air PISTOL, folks!

Naturally, the lighter Kodiaks didn’t shoot to the same point of aim as the Eun Jins. They had to be adjusted up just a bit to get on target. Once there, they did the job in a workmanlike manner. 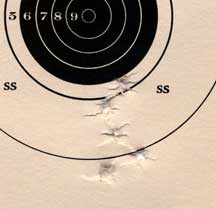 This group of 5 Kodiaks represents an average group at 25 yards. It’s 0.925″ between centers of the two widest shots.

One thing I noticed with both Eun Jins and Kodiaks was that there are only 6 usable shots in the single-action mode. After that, the pellets start falling lower…even at 25 yards. Since double-action is reserved for followup shots only, plan on filling the gun after every cylinder.

Overall observations
The Renegade pistol is very powerful and quite accurate for a pistol. It can definitely be used for hunting game up to the size of a raccoon. While it’s not a small handgun, it’s much more compact than even a short carbine. If you’re looking for something small to carry into the woods, this could be it. Personally, I’d shoot single-action most of the time and use double-action when I needed a quick follow-up shot.