When I was writing the R1 Homebrew series of articles for The Airgun Letter, I did lots of side experiments and research to discover what tuning tips did and didn’t work. In the area of air transfer ports, I discovered a lot that wasn’t documented at all, and more that was known to only a few people. Apparently, the air transfer port is one of the most modified areas of a spring gun, yet very few people are doing any research on the effects of modification.

When seen in cross-section, the air transfer port is actually a tunnel that runs from the compression chamber to a point immediately behind the breech, where the pellet sits. The compressed air rushes through this tunnel and blasts into the skirt of the pellet, sending it on its journey down the barrel. How this port or tunnel is made and where it’s positioned play a large part in the efficiency of the air blast, which determines the rifle’s efficiency. 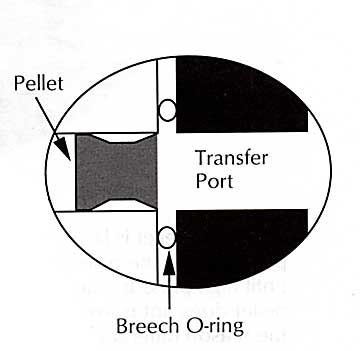 Seen in cross-section, the pellet seals the front of the air space and the piston seals the rear (piston is to your right and not shown in this drawing). This is the air volume that gets compressed when a spring gun fires.

Don’t think for one minute that this design is easily understood, despite being so dirt-simple. Jack Lewis, a famous gun writer and editor of the 1950s and ’60s, saw a cutaway like this and thought the empty space he was looking at was a valve. He described that phantom valve in detail in a 1960s article about spring-piston rifles–not unlike the amateur astronomer Percival Lowell describing the canals on Mars. But now you know what it is–the space between the piston seal and the pellet. It’s the part that’s the air transfer port that interests us.

Air transfer ports are placed where they have to be because of the gun’s design and also in order to do their job. Their job is simple–pass the compressed air from the piston to the pellet. Since they’re open all the time (being nothing more than passageways), they form a part of the total volume of the compression chamber, even though they’re not inside the chamber. Understanding that is important to understanding what comes next. 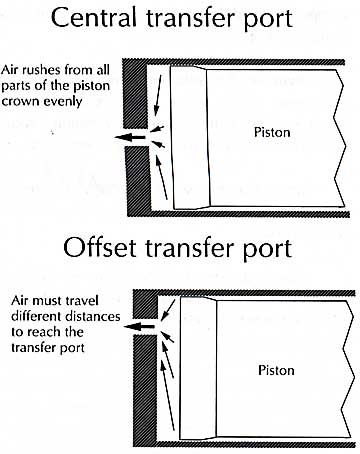 The central transfer port is more efficient than the offset port. Pardon the distortion in this image. It was scanned from the Beeman R1 book. 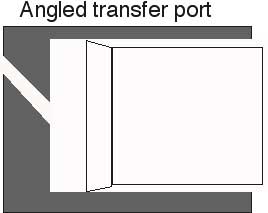 An angled transfer port centers the port in both the barrel and the compression chamber. To be angled, it must be longer and, therefore, loses efficiency.

Unfortunately, when the port is cut on an angle, it has to be longer, and the extra length adds volume to the compression chamber–remember that? Extra volume means the air cannot be compressed to the same degree, and, if we are correct about the intensity of the air blast being more important than the amount of air compressed, well, then it becomes a very big deal.

The TX200 has a curious humpbacked appearance, because the barrel is lowered to align with the center of the compression chamber. Hence, a light spring can produce great power with less effort. The RWS Diana 48/52/54 is designed the same way and produces similar results. The majority of airguns are not designed this way, so their transfer ports either have to be offset or longer to carry the air where it has to go.