Today I’m writing an emergency blog I shoehorned into the list. Sparkie, who assures me he is NOT Clark W. Griswold Jr. (Chevy Chase’s Christmas Vacation), sent me a comment with his interpretation of how a spring-piston airgun worked. He was off a little, as many people are, so today I will show you exactly how a spring-piston gun works.

The spring-piston airgun is the simplest type of powerplant from the standpoint of parts. There are but a few. It’s a wonder that it’s also one of the most recently developed, but read this report to see the history.

The gun works by the force of a piston compressing the air in front of it to power a pellet. A powerful spring or charge of compressed gas drives the piston when the gun fires. Besides a spring, in the past both dynamite and gunpowder have been used to power the piston. On the back page of the January 2009 edition of Popular mechanics, there’s a brief piece about a gas-powered gun NASA uses to test micrometeor impacts. That gun is powered by gunpowder that compresses hydrogen gas to 100,000 psi. That gun has no piston, so the sabotted projectile acts as the piston instead. Interesting!

No matter what type of spring-piston mechanism it is (breakbarrel, underlever or sidelever), the barrel aligns with an air transfer port like this when the gun fires. The air transfer port is shown at the right of the picture. These parts are in front of (to the left of) the compression tube shown below. 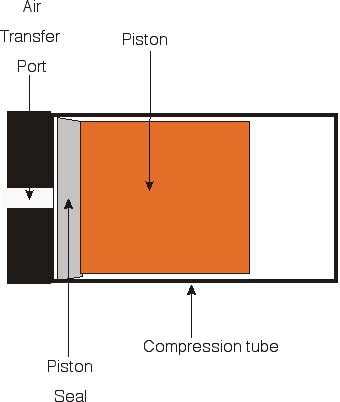 Here’s the secret!
This is what confuses a lot of people. Inside the compression tube, which is also called the spring tube, the piston rests at the end of the tube until the gun is cocked. The air transfer port is at the end of the compression tube and leads directly to the barrel. There’s no valve of any kind in this system. It’s like a soda straw that you can blow through to expel a paper ball. No valve is required.

When the piston’s withdrawn, it pulls air into a chamber that forms in front of it. That chamber is called the compression chamber. There’s nothing mechanical between the piston and the barrel, where the pellet sits. 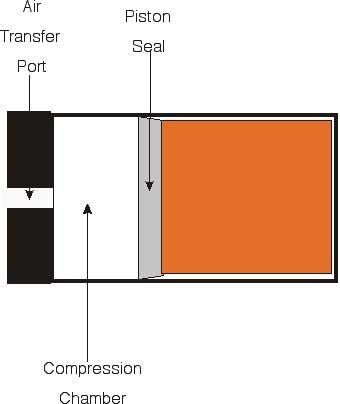 When the piston is withdrawn upon cocking, a compression chamber forms in front of it. After that chamber lies the air transfer port and after that is the barrel.

When you load a pellet into the barrel, it forms an airtight seal. When the barrel is plugged with a pellet, the piston goes forward and compresses the air in front of it and the air presses hard on the pellet until it overcomes the pellet’s resistance. The pressure of the compressed air is high–above 1,200 psi in tests that have been done. But the AMOUNT of air at that pressure is very small–just what was in the compression chamber.

So, the pellet gets swatted on its tail by a tiny puff of air at very high pressure. The pellet cannot remain where it is, so it starts moving down the barrel. As it does, the air behind it loses pressure rapidly. After 8-10 inches, the air is almost at the same pressure as it is outside the gun. The pellet has accelerated to as fast as it will go by this point.

That’s all there is to it
There’s nothing more than that at work in a spring-piston air gun. There are different designs of powerplants, of course, but they all work by the same simple design. In a Whiscombe rifle, two pistons that are opposed come together like the clapping of hands, with the air transfer port at the center of where they meet. But the operation of the piston(s) doesn’t change.

Back in the 1960s, Jack Lewis, a noted gun writer and editor, saw a cross-section drawing of a spring-piston rifle and assumed that the blank space occupied by the air transfer port was a reed valve. He proceeded to describe the operation of that valve in great detail in his article about how a certain spring gun worked. The only problem was that THERE WAS NO VALVE!

What I am showing you here is all there is to this design.

Sparkie and anyone else who wants to learn more about how spring-piston guns work–here are two recommended posts. Both are multi-part reports.

89 thoughts on “How a spring-piston airgun works”