In the time since I wrote Part 4 of this report, hundreds of Benjamin Marauders have been shipped. Though there is still a huge backlog of orders, the Marauder is now out there, being tested by real people like our own Derrick, who won Marauder number 100 in Crosman’s Summer House contest. So listen to them–not me–when it comes to accuracy, quiet operation, trigger performance and everything else.

However, I promised you I would return to the Marauder to finish my report, because there were a few details I needed to clear up. One was the trigger, which Matt very much wants to read about, and the other was a test of the production valve that Crosman sent met. This report will hit the trigger hard and begin our look at the new valve.

When Crosman sent me the new valve to test they sent it in an assembled reservoir that had a trigger attached to it. So the trigger I had on the rifle I tested for you before (Parts 1 through 4) has now been changed. I took the rifle with the new valve out to the range yesterday to sight it in and noticed that the new trigger is set similar to the first one, so I will adjust it now, as I explain the process to you.

According to my RCBS trigger-pull gauge, the trigger on the gun now breaks at 1.5 lbs. To access the adjustment screws, remove the trigger guard. The pull-weight screw is in front of the trigger blade and is a 1/8″ Allen screw. Turning clockwise increases pull weight and counterclockwise decreases pull weight. Just for fun I turned the screw in several turns and increased the pull weight to 2 pounds, 4 ounces. Most of this weight is loaded into the first stage, so stage two becomes hard to sense when the weight is high.


Speaking of safeties, the one on the Marauder is manual. Derrick reckons Crosman must have bound and gagged their lawyer to get this one out the door! The safety is a blade in front of the trigger that you can operate with your trigger finger.

The pull weight is also governed by where you place your finger on the trigger blade, since it is a lever. I find it natural to hit the blade about in the center, so that’s where I hook the trigger gauge for measurements.

You can also adjust the location of the trigger blade, fore and aft, to suit your hand. I found that it is right for me, so I left it alone.

First and second stage lengths
Two screws behind the trigger blade adjust the lengths of the first and second stage pulls. Each takes a wee-teeny .050″ Allen wrench, as does the trigger location adjustment. These two screws adjust together, so changing one automatically changes the other. You will have to adjust both screws until you get the first stage stopping where you want and the second traveling as far as you want.

Trigger performance
This is a world-class trigger, make no mistake. The let-off weight remains the same from shot to shot, so you can get used to the performance.

Well, that’s it for the trigger, except to note that an overtravel stop would be nice. Now I’d like to begin my report on the gun’s performance with the new valve. Except that when I reached the range I had no idea what fill pressure Crosman had set the new valve to, nor what power level they set up. So there I was on the 50-yard range without a clue about what I was shooting! And that was sad, because I watched three out of five Kodiaks sail through THE SAME HOLE at that range. The other two shots opened the group to 1.25 inches, so until I get control over what I’m shooting, I cannot finish this report.

A note on barrel cleaning
Ray Apelles, who was one of the developers of the Marauder, discussed barrel cleaning with me. Ray pointed out that there is an o-ring INSIDE the barrel, just in from the breech. It seals the bolt after it has pushed the pellet into position. Well, I hardly want to run JB Bore Paste down a barrel that has an o-ring! So cleaning the Marauder barrel will be limited to cleaning patches pulled through with a flexible cable. I did put some diver’s grease on that o-ring, however.

Let’s test the rifle!
Today, with the help of the chronograph, I will discover how this gun has been set up. So the first thing to do is to fill to 3,000 psi on my tank gauge, and to note where the needle on the gun’s manometer rests at that pressure.

A fill to 3,000 on the gauge mounted on my carbon fiber tank resulted in a nearly identical reading on the gun’s manometer. So at that pressure, the rifle agrees with a tank gauge that I know to be reasonably accurate. 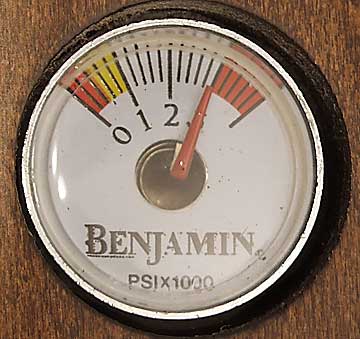 Gun’s built-in manometer agrees with the gauge on the fill tank.

With that fill, I began shooting Crosman 10.5-grain Premiers. I was so amazed by what I recorded that I’m printing the entire string here.

To my eyes that string is incredible, because it shows a valve efficiency seldom seen in a PCP. Usually, when a gun drops off the power curve, which for a 50-yard shooter might be around shot number 31, the way this rifle is set up, the velocity drops off rapidly. But this gun hangs on through shot 43. If you were shooting at 35 yards there might be 40 good shots per fill. In fact, my strategy would be to fill to 3,000 and shoot four magazines before refilling for everything short of long-range accuracy testing.

For those shooting long range, I would fill to 2,900 psi and shoot 27 shots. That should net you an extreme velocity spread of about 20 f.p.s., give or take.

Conclusions
Now that I know how the rifle is shooting, I will adjust the velocity to clip off the final 30-40 f.p.s. and see if I can’t get a shot or two more per string with an average around 900 f.p.s.