As it turns out, the clearance between the pivot bolt and hole in the breechblock was a little too loose, and this seemed to be responsible for the lockup problem (as it often is). But everything is machined from solid steel; there’s no bushing to wear down and replace. As I’m mulling over what needs to be done, it finally occurs to me that the pivot bolt is actually tapered, and that’s how the factory controls the clearance. Now that things started wearing a bit, I needed to get the bolt to go in further so the widening taper would snug things up again. If I go too far, it would jam solid in the breech and rotate in the lockup fork, which I don’t think it’s supposed to do.

I undercut the bolt head, and undercut it way too much on purpose. As I suspected, the bolt now jams in the breechblock, but I fix that by installing a steel shim under the bolt head to bring it back out a bit. This way, if it wears again, it can easily be readjusted by putting a thinner shim in place. 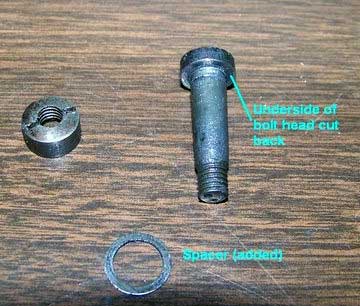 This tightens the lock nicely and gets rid of most of the barrel lift. There’s still a little, but that’s one of those things I think we’re gonna have to live with. The moly paste I put into the pivot and fork should minimize further wear, so it shouldn’t get worse anytime soon.

That pretty much wraps up the Tell. How does it shoot? Velocity is about the same as before I started; and as I mentioned earlier, the trigger is certainly stiff. Unfortunately, accuracy just isn’t that good, even after cleaning the barrel.

In the course of trying to nail down the reason, I try pushing a pellet down the bore and find a rough patch right near the muzzle. If I sight down the bore from the breech end, I can see a ring that seems to be intruding into the bore’s surface. Sure enough, it looks like there’s some bad pitting at the muzzle. A second JB-and-bronze-brush cleaning doesn’t help.

I offered Wayne a choice: leave it as is or let me drill out the last inch or so of barrel and hopefully get past the rough stuff. I didn’t think this gun was ever gonna be a volume shooter, but rather just a functioning relic that could be taken down and shot once in a while. I really didn’t want to drill out the barrel. I had to consider what it would do to the collector value–and what Wayne might do to me if I screwed it up! To my relief, Wayne concurred. No drilling.

Wayne’s now got his Tell back, capable of grouping about 1″ or so at 10 yards. Enough to whack the aforementioned soda cans pretty reliably…and certainly better than most BB guns at that range. I wish it had come out better for him, but sometimes there’s a limit to what can be done. But it works, it works reliably and it will certainly be an interesting addition to his collection.