As I go through all the airguns on hand and get ready to report on new ones, you readers are generally ahead of me, urging me to test this one and that one. I thought I was going to surprise you with the Gamo Extreme CO2, but just yesterday, Dallas from Australia asked for it. How strange, because it was slated for today a week ago.

How many of you remember that Gamo had a CO2 rifle back in the 1990s? The G1200 was a pump-action (slide action, actually) repeater powered by 12-gram CO2 cartridges. The Blue Book of Airguns has precious little information on that rifle, but I was around when it was new. I don’t know how well it sold here in the U.S., but the advertised velocity in .177 was 560 f.p.s., which is pretty reasonable. I would expect a velocity of not above 620 f.p.s. from a hot .177 CO2 rifle with any size cartridge or reservoir. But the Extreme CO2 is not a .177. It’s a .22! So I find Gamo’s claim of 700 f.p.s. to be extremely interesting. I will be certain to explore it for you.

Of course, it’s summer now and CO2 guns are summer guns, so this is an appropriate rifle to test and use. The Extreme CO2 uses an 88-gram cartridge that gives the rifle the potential for a great number of shots. They will not be more powerful than those from a 12-gram cartridge, of course, because the size of the container has no bearing on the pressure of the gas. But this is a plinking gun and more gas is very desirable for lots of continuous shooting. 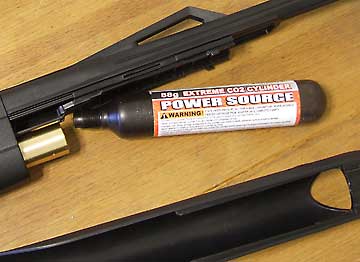 This “thousand-word” picture shows where the 88-gram gas cartridge goes, which is under the sliding forearm. The long, sloped rear sight is also visible.

This is a repeater, too, and not just a repeater–it’s a slide-action repeater or what is best known in the firearms world as a pump gun. I use that term with care because I find that it confuses new airgunners, who equate the word pump with a multi-pump pneumatic. The Extreme CO2 runs on CO2, only. The term pump in this case refers to how the circular clip is advanced and how the rifle is cocked. The synthetic forearm slides straight backward, advancing the clip and cocking the hammer. Then it returns forward again in preparation for the shot. Once you get accustomed to the movement of the forearm, a pump gun is almost as fast to shoot as a semiautomatic.

Okay, 700 f.p.s. and .22 caliber. What does that tell you about the sound? This rifle will be LOUD, make no mistake. It has to be, with that volume of gas being exhausted from the muzzle. Even if it doesn’t reach 700, it’s still clear that Gamo intends for this to be a powerful rifle–and power in a gas gun means noise, as a rule.

This is a 10-shot repeater and comes with two rotary clips. To load, you have to pull the forearm back, then pull back on a locking lever to unlock the clip.

The forearm removes by pressing two buttons–one on either side, and pulling it straight forward and off the gun. It must be removed to install an 88-gram CO2 cartridge. Both the forearm and the piece it attaches to that remains on the gun are made of plastic. I will watch them both for signs of stress, because they operate the action. The safety is a crossblock type that runs through the bottom forward part of the triggerguard.

Most of what you touch on the gun–butt, forearm, barrel casing–is plastic. But the receiver is annodized aluminum with a black finish over a heavily bead-blasted surface. Therefore, the Extreme CO2 is not a light airgun. It is both large and heavy–at least for a CO2 rifle. The length of 43.3″ overall and weight of 7.7 lbs. don’t convey the sense of largeness felt when the rifle is in your hands. The CO2 cartridge and scope that come with the gun boost the weight to over 9 lbs.

The stock is fully ambidextrous, and so, of course, is the pump action. Lefties should really enjoy this one. The synthetic stock is hollow, so many of you will want to fill it with foam to deaden any vibration.

The open sights are quite unique. The front is a red fiberoptic bead, which is not uncommon, but the rear is a long, sloped ramp with a yellow arrow to align with the front. It looks like it will be quick to acquire. Of course the scope that comes with the rifle will probably be mounted in the preponderance of cases. It’s a 3-9×40 scope that appears clear enough after the first examination. It comes with a one-piece mount already on the scope, so all you have to do is clamp it to the receiver dovetail. 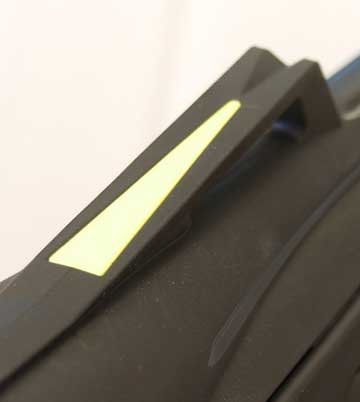 The rear sight is a long, gentle slope. The yellow arrow points to the red bead front sight when you sight over the receiver. It looks like a landing pattern when you see it in person!

This has been a boom year for new airguns, and this would appear to be one more to add to the mix. Of course, we have to test it to be sure, but I like this rifle already–just from the feel.