Today’s blog is reprinted from Airgun Revue #5, which was published in 1999. If you’ve ever attended some of the larger airgun shows, you’ve seen airgun collector Roger Blaisdell. An all-round nice guy, Roger told me about some of his recent acquisitions.

Roger Blaisdell is an advanced collector from New England who often comes up with the most startling finds. Like most advanced collectors, he keeps his sources under tight wraps but is more than willing to share his finds with the rest of us. At one of the annual Airgun Expo shows in Little Rock, Arkansas, Roger showed me three most remarkable finds he had discovered recently. He asked me to show them to you, and I’m happy to do so. 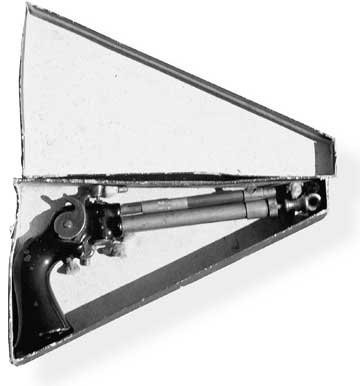 A boxed Hawley is a super find for any collector. 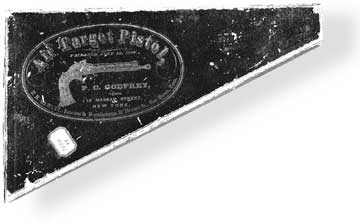 The triangular box must have been an eye-catcher on the shelf.

The first great airgun goes by several names. Some call it the Hawley, after the manufacturer, Edwin H. Hawley, while others call it the Kalamazoo, after his hometown in Michigan. If you didn’t know this, however, you might be tempted to call it a “Godfrey,” for the name of the sales agent printed on the box–or possibly a New Haven Pistol, for the city of manufacture, also printed on the box–assuming you had a box, of course. Of the roughly 10 Hawleys I’ve seen in my life, only this one has its original cardboard box–an item that I feel must certainly be as valuable as the gun inside.

Edwin Hawley patented his multi-pump pneumatic air pistol on June 1, 1869, just a few short years after the end of the Civil War. In 1871, he obtained another patent, the one that actually covers the pistol as it was built, but that date appears nowhere on the gun or the box. The earlier date is stamped on the barrel of the gun and is the only marking to be found. But advanced collectors can pick a Hawley out of any lineup. It has such Victorian lines, it almost seems to be a caricature of a pistol rather than a working model.

The correct finish for a Hawley is nickel-plating on all the brass parts, with the steel hammer and cast iron pump handle left in the white. The iron grip, which also serves as the reservoir, is painted shiny black, a process known then as “Japanning.” I once saw an almost-perfect Hawley that is now in the collection of Fred Liady, and it was a most striking sight. Roger’s gun has absolutely no trace of nickel anywhere, which leads him to wonder whether it was ever finished at all. I believe that it was; and that when most of the nickel flaked off, as will sometimes happen, some owner took it down to the brass. We certainly see this often enough in Benjamin guns from the 1930s.

You probably wonder how well a gun like this shoots, and I share that question, for I have never seen a Hawley discharged. I do know that it is designed as a dart gun, and lucky Roger seems to have acquired several of the original darts with his gun. Dart guns are not usually powerful, and this would seem to hold true for the Hawley. In a famous ad from an 1870 Scientific American magazine, it was claimed to get from five to ten shots, good out to 50 feet, from a single charging. Nowhere, however, does it say how many pump strokes are involved in this charging. Judging from the shape of the mechanism, I would bet a charge is somewhere between 10 and 20 strokes of the pump handle. Of course, darts fly much slower than pellets, so this is really a weak air pistol, even with its multiple shots.

The pump handle is a cast iron knob on the front of the pump rod. It has a hole through it for the insertion of an auxiliary handle of sorts, which seems to be missing from the box. Perhaps there never was one, and the customer was expected to figure things out for himself.

The handle worked straight in and out in the manner so familiar to collectors of vintage “bicycle pump” Benjamins. When pumping was completed, the barrel was slid forward, and the dart was loaded directly in the breech. A simple design, but you must remember–this was the first American air pistol to use it. The Quackenbushes and Haviland & Gunns were still in the future when the Hawley hit the market, so whatever we see here was happening for the very first time.

Hawleys are rare enough, but they’re not unheard of. What I mean is that you can find one if you really want to. Unlike some other guns, like the Brown Pneumatic pistol, Hawleys do become available from time to time; and collectors who want them can find them. I think Roger’s find of a boxed example has to be one of the best finds I’ve ever heard of.

Any cased vintage air cane is a wonderful collectible, but this one is even more special. Its diminutive size makes it much rarer than the larger canes usually encountered. It measures just under 3/4″ across the joint where the two halves screw together.

His next find happened at the famous Maryland Arms Collectors Show in Timonium. I was privileged to be there to see it happen. That show was such a super one in 1999, as there was an original Bates ball reservoir pistol with a SIGNED pump, as well as dozens of other fine airgun collectibles. One of them was a beautiful cased air cane whose owner walked right straight up to Roger and made a deal. Air canes are always of interest–especially cased sets like this. But this one is very special.

According to convention, air canes are measured for relative size across their diameter at the junction of the two halves of the cane. Most common canes measure about 1-1/4″ to 1-1/2″ at this point. Roger’s cane measures just under 3/4″, which makes it a most diminutive and dainty cane. It’s also too short to pass as a walking stick for all but a very short person, say under five feet tall. Of course, not all canes were used that way in the Victorian era. Some were simply carried as larger versions of the military “swagger stick”–a fashion statement instead of an aid to walking. If the cane were also a pneumatic weapon, the owner no doubt felt well-protected.

The tools in the case seem very complete. There’s a pump body with detachable foot rest, an oil can, a bullet mold, a key for cocking and even a set of printed instructions for the gun. The bullet mold appears to be a replacement, but everything else looks original.

The pump tube is fashioned from rich Damascus twist steel, in the manner of the finest firearms of the past century. It’s browned to a deep chocolate color, which brings out the grain structure in the twisted steel and iron bars that were hammered into the round barrel. And it operates smoothly, having a hand-lapped piston with no leather seal. Just a drop of oil before starting was all it took to seal the pump perfectly. 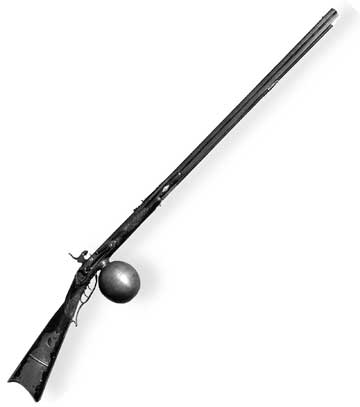 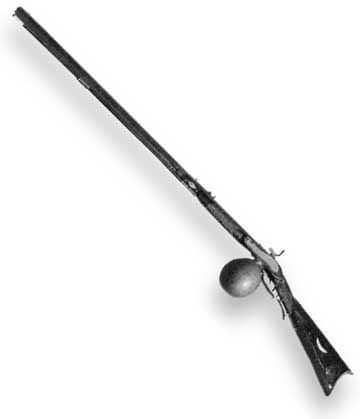 A ball reservoir is always a find. This one resembles a gun marked as an American “Kentucky” in Wolff’s book.

The last find Roger made is one he’s been searching for many years–a ball reservoir air rifle. Several times he’s been within striking distance of his goal, only to have it snatched from his grasp. But perseverance paid off because he now owns one. 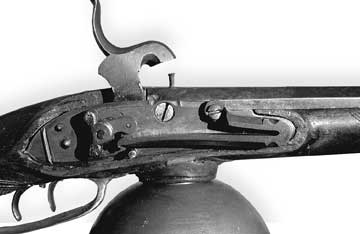 The lock seems to be a hybrid of the German bar lock, with half the hammer hidden from view, but the rest is visible both above and below the metal plate.

Roger’s ball reservoir gun has a one-piece brass reservoir as opposed to copper or iron hemispheres joined at the middle. The lock seems to be patterned on the German bar lock but is just a bit different than those. Actually, the gun closely resembles a gun in Wolff’s book, Air Guns, which he refers to as an “American ball-reservoir Kentucky rifle.” The author states that he’s unsure of the country of origin of the lock, which is the whole gun as far as an airgun goes, so the use of the term “American” seems to be based more on the outward appearance of the gun rather than on concrete provenance. Roger’s rifle certainly resembles a half-stock Kentucky (or Pennsylvania, for the purists) than an English or German airgun.

The lock is half-concealed and half-exposed. The hammer is behind a metal plate and appears to be inside the lock, but it’s not. But the mainspring that powers it is connected on the outside of the gun, a very strange arrangement that may lend support to Roger’s belief that this is not an English or German gun. 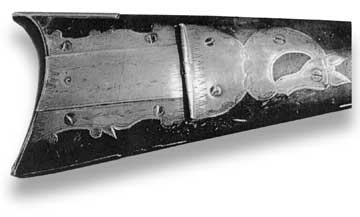 Like any Kentucky rifle, this one has a decorative patchbox. It’s done in a primitive style, with a stylized horse as the subject. It lends a lot of character to the gun.

The brass patchbox on the right side of the butt and is made of pierced brass in the shape of a stylized horse. The workmanship looks very much like primitive American gunsmithery, lending even more credence to Roger’s beliefs about the gun’s origins.

Under the octagonal barrel, a wooden ramrod rides in a brass thimble, also lending to the primitive look. Of course, on a gun like this, a ramrod is very necessary, for they were loaded in exactly the same way as the firearms they copied. A patched ball would have been the only practical projectile, as the low airgun velocities would never stabilize a conical bullet. All the hunter would have lacked is the powder and, in later days, percussion caps, to distinguish himself from any other riflemen of the time.

Roger is most pleased with this find, although a little curious as to the true origins. With just the sketchy few paragraphs from Wolff’s book to go on, he’s reluctant to state positively that he has an American ball reservoir gun. The signs look good, though. Anyone who might be able to add information about the origin of Roger’s unsigned airgun should comment on this blog, and I’ll pass along the info to him. Thanks to Roger for his generosity in sharing these guns with us.