Happy Thanksgiving to all our U.S. readers, wherever they may be.

Blogger is still hosed, but Edith is finding ways around it. The Blogger support team, in contrast, hasn’t done anything to solve the issue, which affects not just this blog but also many others around the world. Edith has been in touch with people from all over, and they’re sharing tips on workarounds.

I mentioned in Part 4 that I would return and adjust the rifle for a specific pellet. And in Part 3 I mentioned that my test shot string of 100 shots had a 34 f.p.s. deviation. That’s important to remember, as today I’m going to try to stretch that just a bit. 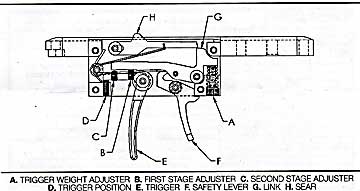 My trigger felt light but had an extremely long second stage pull. When I put the trigger-pull gauge on it, it measured 3 lbs., 2 oz. That’s quite a bit heavier than I imagined it would be. I adjusted the weight of the pull to go down as low as it would go and got a 1 lb., 12 oz. pull. Then, the adjustment screw and the trigger-pull-weight spring fell out, and the trigger still measured 1 lb., 12 oz. So, Crosman has adjusted the rifle so it will never go below the sporter-class mandatory 1 lb., 8 oz. limit. 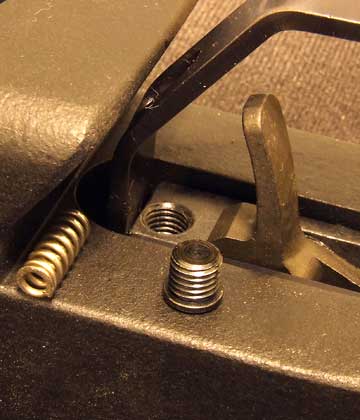 When I adjusted the trigger-pull weight, the screw fell out of its hole, along with the spring that controls the pull weight. The trigger still had a legal amount of pull.

I turned the second-stage screw counterclockwise until the second-stage pull had no perceptible movement. During the trigger-pull, the trigger blade stopped at stage two and then broke cleanly without any sense of movement. Following the release, the spring pressure on the trigger increases to such an extent that it feels like a positive trigger stop when you’re squeezing off the shot. You can still pull the trigger blade backwards if you try, but the heavier weight after the sear releases feels like a positive trigger overtravel stop. At this point, the trigger was adjusted perfectly to suit me. 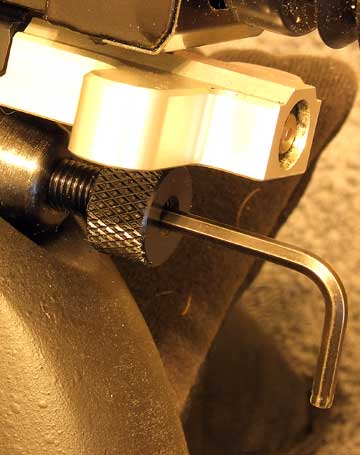 What do you want to do?
I wanted to increase the number of usable shots by decreasing the average velocity. But how much did I have to drop to get a good long string with the least velocity variation?

The manual gives guidance for default settings of both adjustments, but that doesn’t answer my question. And nobody can answer my question, because these are two interrelated but separate adjustments that affect one another. You may adjust either one or both adjustments and get an initial velocity change, but how do you know if that change is what you really want? There’s only one way to know. You have to shoot the gun from a fresh fill until it drops in velocity below your minimum criterion. And YOU have to pick that criterion! If you’re reading this report the way I intended, you are now seeing that this process is practically infinite. Yet, getting through it isn’t nearly as cumbersome or confusing as it sounds. You just have to turn off your brain and stop trying to guess what will happen.

The challenge
Following a fresh fill to 2,000 psi, I chronographed the first shot from the rifle with H&N Finale Match pellets at 560 f.p.s., which was very close to the average I’d gotten in an earlier test (556 f.p.s.). In that test I had gotten 72 total shots within 18 f.p.s. from Gamo Match pellets, and I guess I also got a 100-shot string that had 34 f.p.s.total spread but I don’t know which pellet that was. But that was what I set out to beat. I wanted to get better than 100 shots in a string, or a 100-shot string with a variation lower than 34 f.p.s.

After the first adjustment (one turn in on the hammer stroke, one turn out on the hammer spring tension) the velocity was 540 f.p.s. I thought that was still too fast, so I adjusted the gun a second time. This time it came out with a shot at 532 f.p.s. That was just a trifle above what I was looking for, so I took it. The test was now underway, and the first two shots were included.

Mind-numbing!
I don’t have the ballistic printer for my Chrony like I told you about yesterday, so when I record any shot string, I have to write all the numbers down. A 100-shot string is mind-numbing, to say the least.

The Challenger 2009 went on and on–far longer than I thought it would. Remember, I was getting 72 shots at 560 f.p.s. before adjustment. How much more would come from dropping the speed by a paltry 28 f.p.s.? I had hoped for over 85 shots when this test began, but the rifle was still pumping them out at shot 100. Finally, shot 117 dropped below my criterion of 29 f.p.s. total spread. So, there were an amazing 116 shots in the string that averaged 545 f.p.s.

How did I select the criterion of 29 f.p.s.? I didn’t. The gun did. After that first slow shot of 528 f.p.s., the velocity started increasing. The increase was slow but inexorable, until, at shot 64, the velocity climbed to 557 f.p.s., which was as high as it would go. At that point, 29 f.p.s. separated the high from the low, so I decided to keep on shooting until the velocity dropped below that of the slowest shot–528. Had the top number been higher, I would have accepted it and had a larger total velocity variation. Can you see that I am not controlling anything at this point? I’m just keeping a record of what’s happening.

If you’re very sharp, you also picked up on the fact that the starting velocity of 528 f.p.s. is not the average of this string. It was actually 545. So, I didn’t actually lower the velocity of the gun by 28 f.p.s., as I said earlier. I lowered it by just 15 f.p.s. And that was all it took to increase the shot string from 100 shots with a 34 f.p.s. variation to 116 shots with a 29 f.p.s. variation. I accomplished both my goals on the first try.

Do you think I could do even better than that? Probably. But I’ll leave that chore to you guys. Each of you wants something different from his gun; and as long as you keep it reasonable, the Challenger 2009 can deliver. Remember, it does all of this on a fill of just 2,000 psi.

I’m currently testing the AirForce Edge, which is within a week or two–at the most–of coming to market. As soon as I know when the gun will be available, I’ll start reporting on it.