I know I have a couple reports left to finish, and I’ll get right on them. With the trip to Roanoke and the weekend, plus the end of the month all coming at the same time, I got jammed with a lot of other things. There were articles, videos (that will be up very soon) and a podcast to do, and I just didn’t have the time to mount scopes and shoot for accuracy. Sorry, but it happens.

I thought I would take today and start looking at the new (to me) SAM (Swiss Arms Manufacture) 10-meter pistol I got at Roanoke. You can’t even buy this exact model any longer, but it’s quite similar to Steyr and Anschutz 10-meter pistols, plus SAM still makes 10-meter target pistols, so I hope it will satisfy the curiosity of those what want to see reports on those other guns. The current top SAM model is the K15.

One great thing about this pistol is that its design is guided and influenced by Cesare Morini, the famous maker of the finest target pistol grips available. You’re assured that the grips on this gun will be the very best. While I’ve tested a great many air pistols with Morini grips, this is the first pistol I’ve owned with them.

My pistol came to me with two air tanks–each of which is supposed to get 220 shots from a fill of air to 300 bar (4,350 psi). I’ll fill to 200 bar and get about 100 shots. One tank has a manometer built into the end and the other does not, but this pistol has another fail-safe feature. There’s a lock that engages whenever the air pressure drops below a minimum. When that happens, the breech cover that cocks the gun is locked and you cannot cock the pistol. However, you can manually hold the locking lever back out of the way and cock the pistol anyway, and the manual says there are still 20 good shots when the lock first engages. So, you shouldn’t get caught short in a match. With this feature, a manometer isn’t really needed. 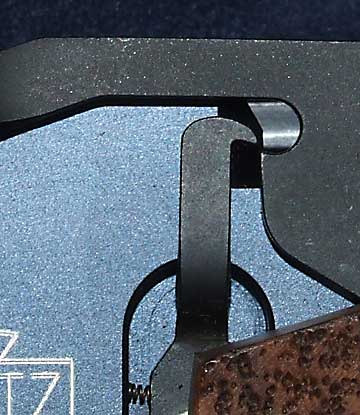 This hook stays away from the cocking arm until the air pressure drops too low. Then it locks the cocking arm. At that point there are still 20 good shots left, but the hook has to be manually moved each time the gun is cocked.

I had shot this pistol many years before, when the owner first acquired it. At the time, I remarked that the trigger was the best I’d ever felt. Well, in the interim, Feinwerkbau has managed to get their P44 trigger working just as well, but nothing I’ve ever tested felt better than this one. And that includes a Morini electronic trigger.

It felt like it was breaking at 10 oz. or less on dry-fire; but when I put it on the RCBS trigger-pull scale, it measured 18 oz. The trouble is, that’s too close for comfort. The last thing I want is to have to adjust my trigger in a match, so I bumped it up to 19 oz. Five hundred grams, which is the required minimum trigger-pull weight, is ~17.7 oz.

Adjustments
The trigger adjusts for location, first-stage travel, first-stage weight, second-stage weight and overtravel. I fiddled with it after adjusting the medium-sized Morini grip to suit my hand. The grip adjusts for size (palm shelf), sideways angle and forward angle. You set it up so your wrist is locked when you’re on target.

There’s a dry-fire lever on the right side of the gun so you can fire hundreds of shots without exhausting any air. This is so essential for a 10-meter competitor, because they shoot many more shots dry than they shoot actual pellets. Their nervous systems get very accustomed to how that trigger feels, to the point that they can hold on the target and simply “wish” the shot off. I explained how this is done in a 7-part report on 10-meter pistol shooting. You might want to read that if this kind of shooting interests you. 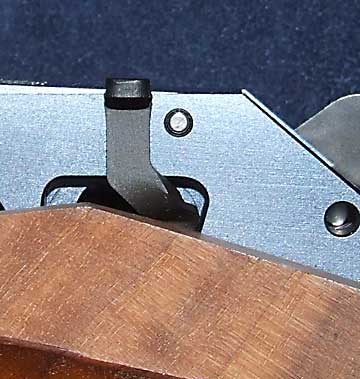 Pull the dry-fire lever to the rear (left in this photo), and the trigger is set without cocking the gun. Trigger-pull remains the same with or without air.

More adjustments
The sights adjust for both windage and elevation. The front blade adjusts for width, and the rear notch can be adjusted to compliment it. Total sight radius (how far the sights are separated) is also adjustable.

The weight bar attaches to the front of the triggerguard if you like and there are two weights that attach to it and adjust forward and aft. The pistol weighs 950 grams without any weight and the bar, called a weight carrier, weighs 100 grams. Each of the weights weighs 25 grams, and you can go up to a maximum of 1,100 grams as the pistol comes from the factory. Naturally, you can buy optional weights for the bar if necessary.

And even more…
The pistol’s velocity is adjustable to a limited extent. It comes set up for about 490 feet per second (~150 meters per second).

Next time, I’ll chrono it and play with the adjuster. Meanwhile, I’ll shoot a few dry rounds each day to get back into the swing of things. 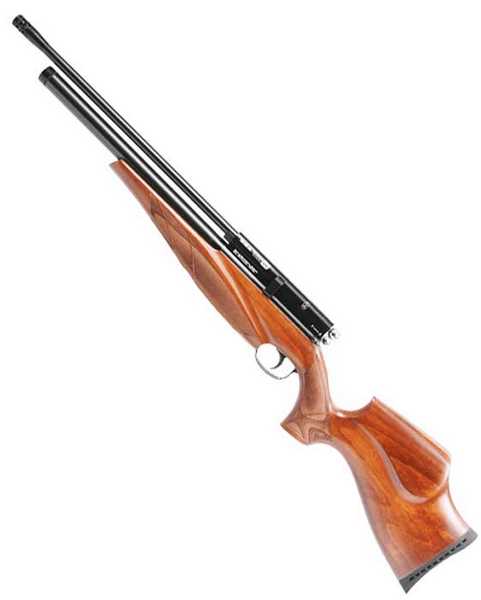