Before we start, I have a some announcements.

Pyramyd Air’s 3rd annual airgun garage sale is on June 5 from 10 am to 3 pm. There will be discontinued, blemished and used guns, scopes and other accessories — plus dented tins of pellets. John Goff from Crosman will be flipping burgers and Pyramyd Air’s technicians will be on hand to help with any questions you might have. Come early for the best selection!

The 18th annual Daisy Get Together will be held on Sunday, August 22, at the Kalamazoo County Fairgrounds Expo Center in Kalamazoo, Michigan, from 9 am to 3 pm. Admission is $2.00…and well worth the entry fee! If you have any interest in buying, selling, trading or seeing vintage BB guns, cap guns and toy guns, this is THE place to go. Besides those great old Daisy guns, there will be plenty of other brands, many so rare that you probably won’t see a second example anywhere else. Contact Bill Duimstra (616-738-2425 or ) or Wes Powers (517-423-4148) for a brochure.

Last but not least, I’d like to thank our military men and women, both current and past, who have given so much to guarantee our freedoms. 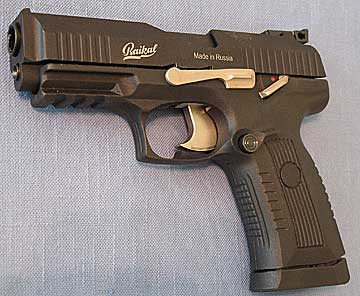 Update: The following crossed-out paragraph should not have appeared in this blog report. As stated in part 1 of the report on this pistol, the 655K does not have blowback, although the slide moves freely. We’re sorry for the confusion on this!

Hobbys
Mac tested the RWS Hobby pellets with a fresh CO2 cartridge. Weighing only 7 grains, we expected to get good velocity from Hobbys. And, we often get good target accuracy at close range.

Shooting single-action, Hobbys averaged 292 fps, with a range from 269 to 328 fps. The average velocity produced a muzzle energy of 1.33 ft-lbs.

On double-action, Hobbys averaged 325 fps, with a range from 304 to 348 fps. The average muzzle velocity produced 1.64 ft-lbs. It’s pretty obvious that the MP-655K is a little more powerful double-action than single.

Premiers
The other pellet Mac tested is the Crosman Premier (7.9 grains) on double-action. The average velocity was 230 fps, with a range from 208 to 240 fps. That gives a muzzle energy of 0.93 ft-lbs.

How many shots?
We already answered this question when we tested BBs. You’re gonna get the same performance on pellets as you did on BBs. In other words, a useful string for plinkers of 90 shots. No reason to over-complicate this. A projectile is projectile — the gun doesn’t care what’s going down the bore.

The 655K, which is the Russian MR 445 Varjag, is a novel sidearm. We’ve already seen many innovations, such as how the BB magazine works. In our next and final report, we’ll look at accuracy with both BBs and pellets.