I learn as much about airguns from this blog as anyone. Only, I get my education from the comments. In the case of today’s topic, the Umarex Steel Storm, I learned that this was already a front-runner among the BB subguns on the market. It didn’t need any of my attention to move it into a top spot.

Full-auto fire is one good reason the Steel Storm surpasses the HKMP5 K-PWD in most people’s eyes. Now, I have to give my opinion on that. The full-auto burst rate of the Steel Storm is nothing like a true submachine gun firing on full auto. The reason? It’s simply too fast. It has a cyclic rate that must exceed 1,200 RPM, which puts it up in the MG 42 (Hitler’s bonesaw) range. In fact, it sounds more like a minigun than a machine gun to me.

That said, kids and people who have never fired automatic weapons are going to love it. Because at this hyper rate of fire it is a very grotesque exaggeration of reality, the stuff daydreams are made of. In short, it’s fun.

I found the gun very easy to load, and with the Steel Storm loading means two different things. First you load BBs into the 300-shot reservoir, and next you load BBs from the reservoir into the 30-shot BB magazine. To do the latter, move the spring-loaded follower to the forward position, then turn the gun on its left side and shake it a few times. The BBs will fall into the magazine channel.

The internal magazine loads by shaking the gun while it’s on its left side. Spring-loaded follower keeps BBs under tension.

After loading, you must manually cock the action for the first shot by retracting the cocking lever that’s located at the upper rear of the receiver. To uncock the action, put the gun on Safe, point the muzzle in a safe direction and pull the trigger. There’s a cocking indicator on both sides of the receiver. A hole located above the selector turns from black to silver when the gun is cocked, giving you a visible means of determining the gun’s status without firing. Another hole at the same location on the other side of the receiver does the same thing. 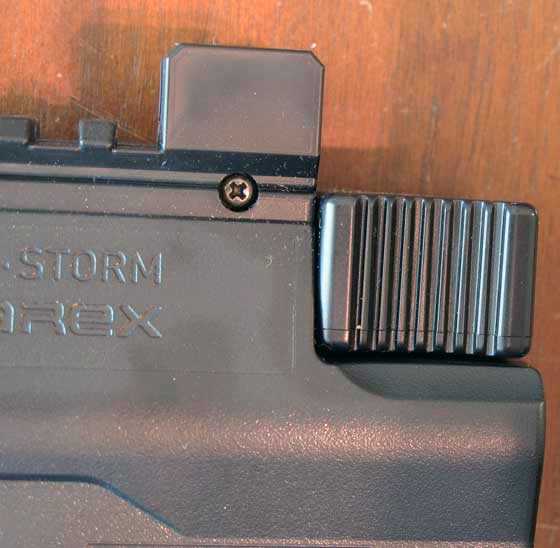 The ridged button at the back of the receiver is the cocking “lever.” 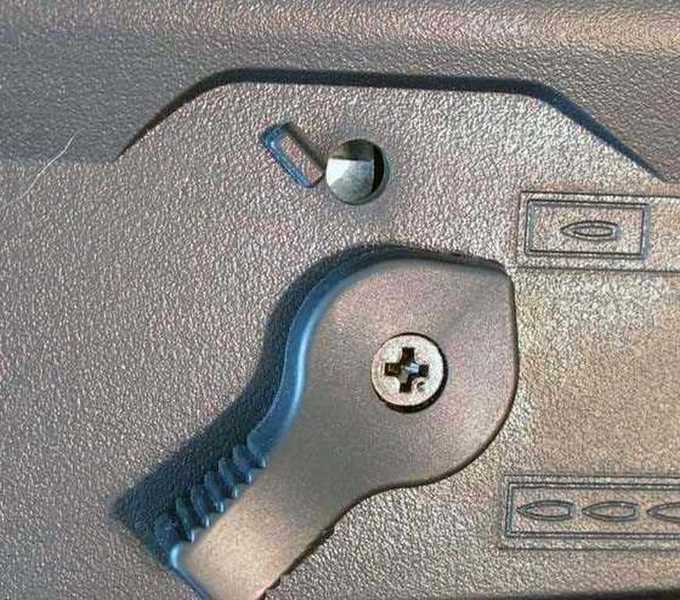 When the gun is cocked, you can see silver through the cocking indicator window above the selector switch. Another hole on the opposite side of the receiver shows the same thing.

Loading the CO2 cartridges
The Steel Storm uses two 12-gram CO2 cartridges that are housed inside the pistol grip. Each cartridge is installed and pierced separately, and I didn’t hear a hiss of gas during the whole operation. However, when I inserted the gas magazine into the pistol grip, there was a puff of gas when the magazine pressed home, as it has to charge the gun.

Firing the gun
The Steel Storm pulses with every shot. You can really feel the power. For chronographing, I set the selector on semiautomatic, of course, and I allowed 15-30 seconds between shots. This is a very loud gun, so be prepared for that.

Daisy zinc-plated BBs
First up were Daisy zinc-plated BBs. We know from the HK MP5 test that they will be slightly slower than the Crosman Copperhead BBs, but the advertised velocity of the Steel Storm is 430 f.p.s., so they should still move out fast. I found it very easy to load just a few BBs into the big reservoir, and then dump them all into the BB magazine. They averaged 422 f.p.s. with a rather large spread from 413 to 439 f.p.s.

Chronograph troubles
I did find that holding the muzzle of this gun too close to the start screen gave several dubious readings. But when I backed up to 12 inches, all the readings were consistent. I think the Steel Storm blasts out a lot of gas that tends to set off the start screen of a sensitive chronograph.

Thus far, I have to say that the Steel Storm is proving to be the more interesting BB submachine gun. Of course there’s still accuracy to consider, plus we haven’t yet heard from the Umarex EBOS.