Announcement: The California General Assembly requires your attention one more time. Several months ago, Senator de Leon wrote SB 798 in an attempt to make black airguns and airsoft guns illegal. All airsoft guns and BB and pellet guns would have to be clear or brightly colored. Because so many of you protested and signed Pyramyd Air’s petition, Sen. de Leon and his cohorts in the Public Safety Committee were forced to pull SB 798. Unfortunately, they’re very creative and have rewritten SB 798, and it could be even more disastrous than the original bill because it now allows any county or city to pass the exact bill they had to pull, resulting in a patchwork of legal and illegal areas around the state. Airgunners could end up being legal one moment and illegal the next. You’d never know when you’re breaking the law as you drive along a street or highway.

You can read about the rewritten bill on Pyramyd Air’s site. You’ll have an opportunity to sign a petition that Pyramyd Air will send on your behalf and also download a letter that you can sign and send to individuals on the California General Assembly.

We won a battle on the first go-round, but the war against airguns is still raging.

Photos and all testing by Earl “Mac” McDonald

While I say this report is by me, it’s really by Mac, who’s been telling me about mini-sniping for almost a decade. It’s one of his favorite sports.

Mac and I used to compete at field target with the DIFTA club in Damascus, Maryland, back in the 1990s. We also used to shoot 10-meter pistol every Monday evening in the league we set up there. So we got to see a lot of each other, though Mac lived in Silver Spring and I lived in Ellicott City.

Mac has always been the better rifle shot of the two of us, and his love of 10-meter rifles helps fuel his constant practice. When field target grew too difficult for many reasons, not the least of which was Edith and I moving to Texas, Mac started mini-sniping with a vengeance, though he had been doing it all along for many years. He has a weekend home on Maryland’s eastern shore, where he can shoot his airguns safely on several acres without bothering the neighbors. One of his favorite sports on this property is mini-sniping.

What is mini-sniping?
Mini-sniping is a game that grew up without a governing body or rules of any kind. In its simplest form, it’s shooting very small targets at long distances with airguns. There’s no standard set of rules to follow, so what I’m about to describe is really just the essence of a sport that has no real definition.

The object is to shoot small objects that move when they are hit. You don’t keep score, unless you want to, and a hit would be a point. But the fun comes not from the score but just from the sheer fun of shooting small targets and sending them flying.

Mac and I have noticed that the way the game is played changes from shooter to shooter or from one small group of guys to another. Some shoot at small plastic Army men (can you say, Toy Story?) while others such as Mac shoot at empty cartridges. And when I say empty cartridges, I do mean just the empty brass cases. Nobody in their right mind would ever shoot at a live round of ammunition.

The cartridges can vary from the common 9mm pistol case to the unbiquitous 12-gauge shotgun case. Mac prefers the 9mm case, so that’s what he’s written about.

The guns can be anything that’s accurate, for mini-sniping is a game of accuracy. Mac chooses to use 10-meter rifles, but nothing prevents you from using a Slavia 630, an Air Venturi Bronco or even a TX200. And it shouldn’t have to be said that the guns can also be pneumatics and even powered by CO2.

For sights, you can use open sights, target sights or even optical sights. With a scope, you can stretch the distance to the target considerably, but it doesn’t have to become a chore. Mac uses ISSF-legal target sights and engages his targets out to as far as 30 yards. A 9mm case looks pretty small at 90 feet, so bear that in mind when setting up the range. Also, the choice of gun will govern how often you lose a case, because when you hit one squarely it’ll fly. Of course a hit from a TX200 will put it into orbit, while a 10-meter rifle will keep it in the same county.

Mac picks an oldie
For this report, Mac selected a Feinwerkbau 300 that was tuned by Randy Bimrose. It lacks the barrel sleeve, so it’s lighter than the typical 10-meter target rifle, though just as accurate. Mac says the action buzzes like a tuning fork after each shot, though he can’t feel it because of the sledge anti-recoil system.

Mac is sitting in the classic international sitting position for field target. He has no support for himself or the gun. Just the triangulation of his body holds the gun steady on target. 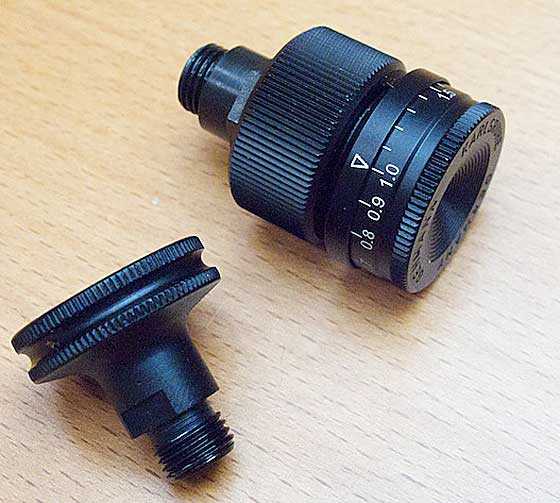 The Gehmann insert (top) contains a lens that sharpens the image of the front sight element for the shooter. It replaces the standard aperture insert in the FWB 300 rear sight, as well many other 10-meter target rifle sights. 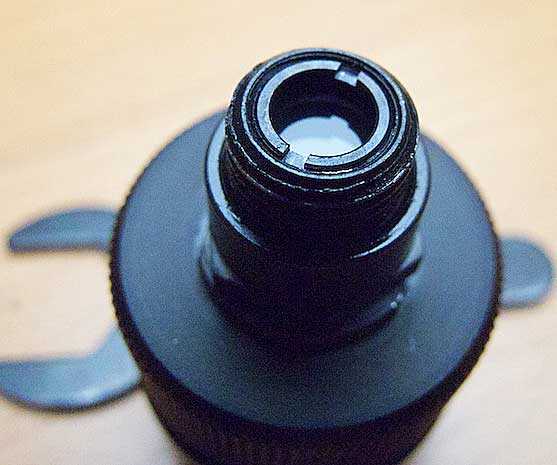 You can see the lens at the back of the Gehmann insert.

The reason he uses this insert is because in the front globe he also uses a clear plastic insert with a 2.0mm hole. That’s a smaller hole than you usually get when you buy a set of clear inserts, but the Gehmann rear insert magnifies the tiny hole so the shooter can see it better against the target. When the target is a 9mm cartridge case 90 feet away, you need all the help you can get to see it without a scope. 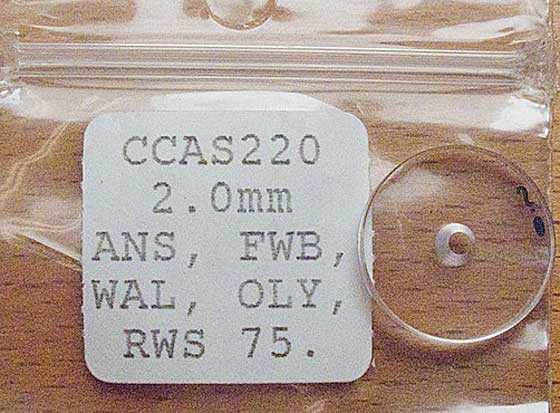 The front sight insert is clear and has a smaller hole than normal. Together with the rear sight insert, it makes for greater precision. 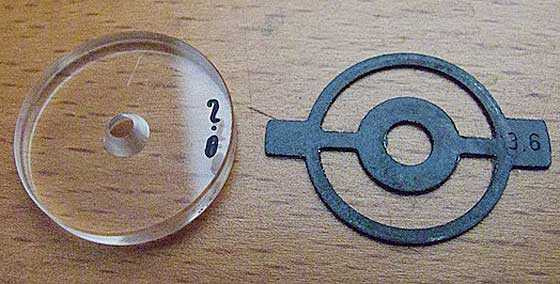 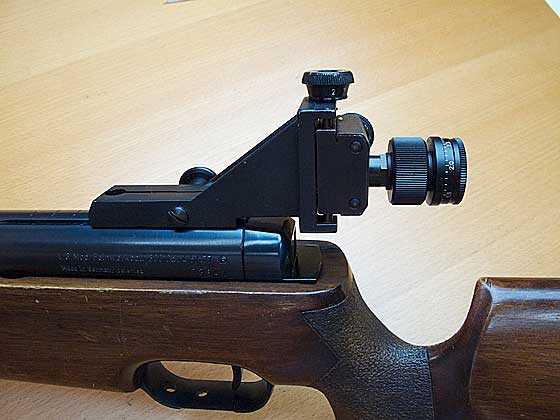 Even though the Gehmann insert lengthened the rear sight, Mac still positioned the sight as far back on the rifle as it would go.

Mac suspects that the target sights are giving him less problems with holdover because they’re mounted closer to the bore than a scope would be. Given the loopy trajectory of the slow-moving .177 pellet this rifle uses, he wants all the advantages he can get.

Performance
Mac tells us that he didn’t waste any time sorting though pellets to find the best one. Instead, he went straight to the 8.4-grain JSB Exact dome that proved so accurate in his Diana model 60 target rifle that I wrote about a few weeks ago. Because all these rifles shoot premium pellets well, he knew he could count on that pellet to work well in this FWB 300, which he’s never really tested since it was repaired.

This pellet gave a velocity averaging 580 f.p.s., with a spread of just 3 f.p.s. It doesn’t get much better than that — ever!

Targets
For targets that would mean something in a print report, Mac decided to use a paper target that showed the results. Of course, in real mini-sniping the target is always an object that moves when hit. He cut a 9mm case in half lengthways and laid it on the target paper, then spray-painted black paint around it. It then appeared to him as a bright aim point (the white paper directly under the 9mm case that didn’t get painted) surrounded by dark areas. He says that’s the way a real 9mm case appears. 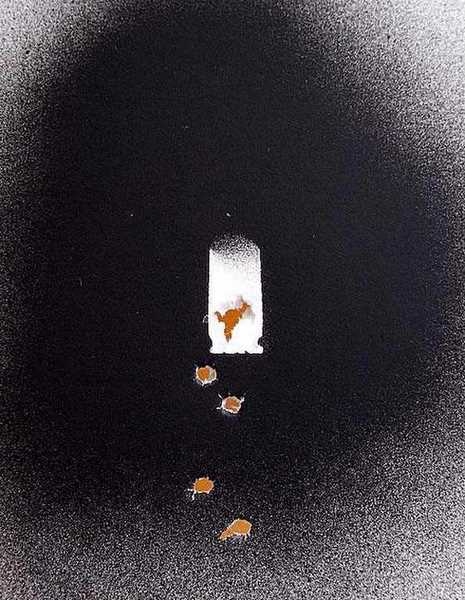 This one target was used at all ranges. Both the 10-yard and 15-yard pellets landed in the same place on the silhouette of the cartridge case. At 20 yards, the pellets landed a little low and at 30 yards they were about one inch low. Had Mac held his sights high to compensate for the drop, all pellets would have hit the target.

You can do this
Mini-sniping has been going on for decades, and I suspect for longer than we know. It’s really just a type of plinking where the targets are standardized instead of random. If you don’t have 9mm cases laying around, you can use clothespins or plastic caps from soda bottles. Some shooters who don’t want to have random targets laying around substitute Necco wafers as targets. These sugary candies are completely biodegradable, whether they are hit or not.

Mini-sniping is a great way to enjoy your airgun. And though the accent of this article has been on rifles, there’s no reason you can’t do the same thing with an air pistol.

I wonder how many of you readers are already doing something like this and just not calling it by this name? I would enjoy hearing from you about how you do it in your neck of the woods.