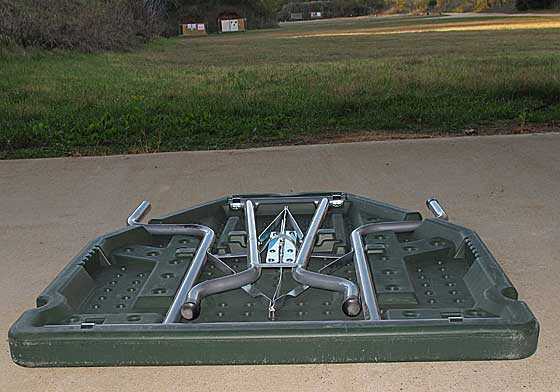 MTM portable shooting bench
Edith and I campaigned to get Pyramyd Air to carry the MTM shooting table, because several readers said they would like to own one. It’s inexpensive and light (14 lbs., 9 oz.) and most of all — portable! I have different shooting ranges in many places, including a couple right here in the house. No matter where I go, indoors or out, this bench is what I use. Even at my rifle range, where the benches are made of concrete and are completely immobile, I choose to use this one and I’ll tell you why: Because I can put it anywhere I want!

Is it a bench or a table? Well, in shooting terminology, it’s always called a shooting bench, even though you don’t sit on it. But MTM chose to call theirs a table, so that’s what I will call it from this point on.

The MTM shooting table when it’s collapsed. It’s a small 14 lb., 9 oz. package that fits flat in the bed of a pickup truck, or stands on the floor of the rear passenger compartment of a mid-sized sedan. 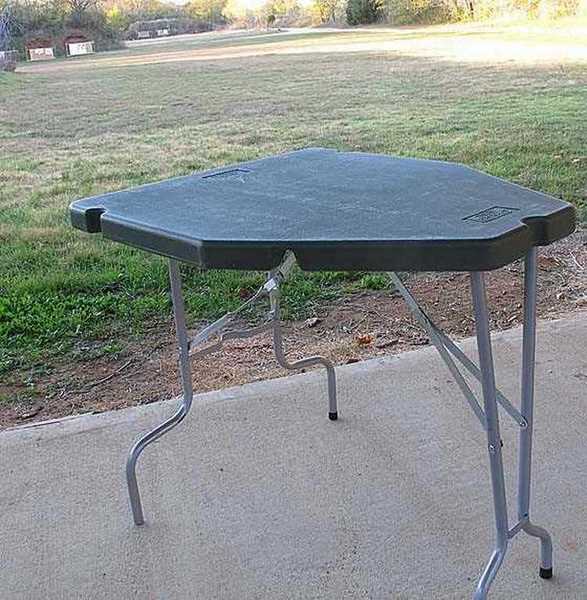 The legs unfold in seconds and the table stands ready to shoot. With this table, you can make a range anywhere — indoors or out.

As long as I have this table, I can make use of almost any space as a range when I want to. If I show up at my club and find all the benches taken, I set this one up on one side of the line and, presto — there’s room for one more.

The table is very light, and the legs fold flat underneath the top for transportation. I did have to tighten all the nuts that hold the hardware together, but I probably set up this table about five times a week and have been doing so for going on two years, so a little maintenance is normal.

I don’t just use the table for benchrest shooting. When I want to shoot pistols it serves as a handy table for guns, ammo and any accessories I need.

If you want something to criticize, the table is a little wobbly. It isn’t steady enough to hold a spotting scope; but when I’m in position behind a rifle, I push against it and nothing moves. Also, I have to slant the table to the left to fit behind it, where a good shooting bench has a top designed with a cutout at the back to allow you to sit next to it. This one won’t support your weight sitting on it, so consider that before ordering. But the good points far outweigh the bad, and this is one of the essential pieces of equipment in my shooting kit.

I’ve had several shooters ask me where they could get a table like this, because at the range you have to use what they have. On our 100-yard range, the benches are all oriented wrong, because the 100-yard berm is angled off to the left and the benches were installed for the 200-yard range. Since most of them are cemented in place, the shooters can’t do much about it, but I can. And now anyone can, because Pyramyd Air now carries this shooting table.

MTM Predator shooting rest
Several of you spotted the MTM Predator shooting rest in my older reports and asked me about it. The truth is that I was ambivalent about this rest until I tried two more expensive ones, including a Caldwell Lead Sled. This one does everything they do except retard the movement of the rifle. If you need a rest to absorb recoil, this isn’t the one to choose; but if all you need is something to hold the rifle in place as you shoot, I can’t think of anything better. All the super-tight groups you’ve seen me shoot were shot from this rest or off a sandbag. 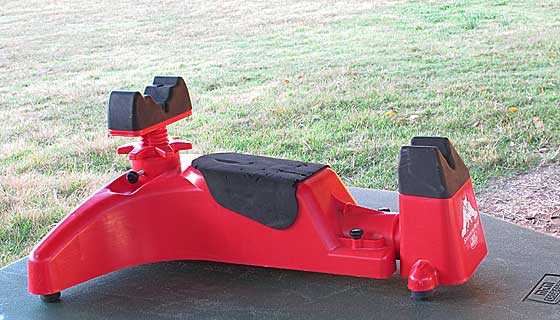 The MTM Predator shooting rest works for both rifles and pistols. It’s lightweight and quick to set up and adjust. Here it’s shown with the tail piece collapsed. 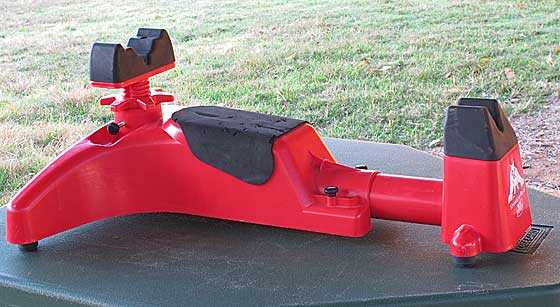 And here the tail piece is extended. It extends in seconds to accommodate rifles and carbines of different lengths. Or remove it altogether and the rest is for pistols. 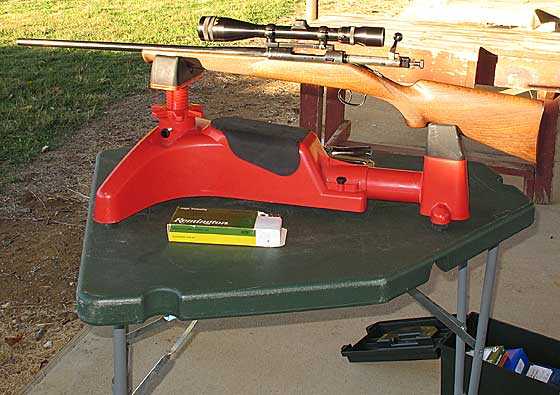 A Savage 1920 bolt-action rifle lays in the rest. As you see, the butt is free to move and must be held against your shoulder. Slide the gun forward and back to lower or raise the sights on the target.

Some rifle rests hold the rifle entirely, with the butt held in a socket that takes all the recoil. I’ve used these rests and don’t care for them, because they push me to the side and make sighting more difficult. That’s probably why I like this MTM rest so much. With this rest, the butt of the rifle rests against your shoulder and you absorb all the recoil. And you have more control over the rifle.

Also, most high-end rifle rests have some lateral movement adjustment built in, so you can move the gun from side to side. The MTM rest doesn’t have this. If you need to move to the side, you simply slide the rest on the shooting bench. It’s so lightweight that it’s no problem to move — even when there’s a rifle on it.

If you’ve never used a rifle rest before, the main feature you’ll like is the elevation adjustment. Turning the adjustment wheel allows the rest to move either up or down in very small increments that equate to about one-thousandth of an inch. Combine the adjustment wheel with moving the rifle fore and aft, and you have very fine control over the elevation. And it’s repeatable! Shot after shot will be targeted on the same aim point once the rest is properly adjusted. 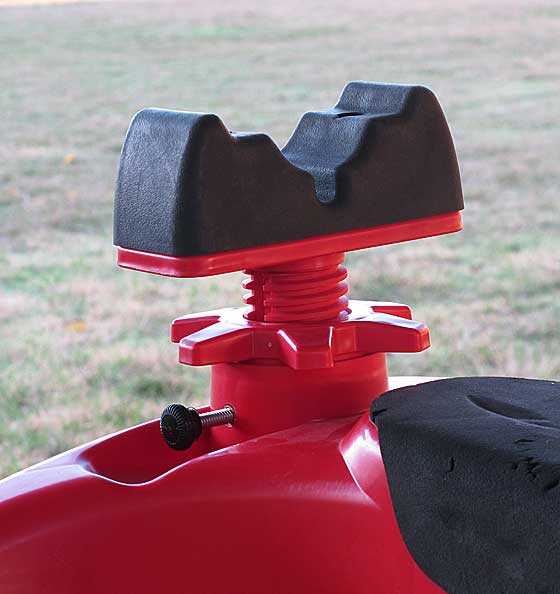 Turn the thumbwheel for vertical adjustment. The weight of the rifle will cause it to lower as you turn. The black thumbscrew is to lock the elevation adjustment.

New airgunners take note
A word to the new airgunners is required. If you shoot spring-piston airguns, you cannot shoot directly off a rest like this one and expect to be accurate. You need to lay the rifle on the flat of your hand and rest the hand on something to support the weight. The Shooter’s Ridge Monkey Bag Gun Rest would be ideal.

A stapler!
Pyramyd Air doesn’t sell these, but I carry one all the time and have worn one out over the past 40 years. You need the stapler to fasten your targets to the backers at the range. If you don’t want to walk an extra 200 yards and anger the other shooters, put extra staples in your pocket the moment you get to the range so you can load the stapler when it runs out — because it always happens when you’re downrange (think about it)! Forget the fancy electric staplers, because they don’t work as well on heavy wood and rubber backers as a manual model. Unless you have arthritis, use a manual stapler. 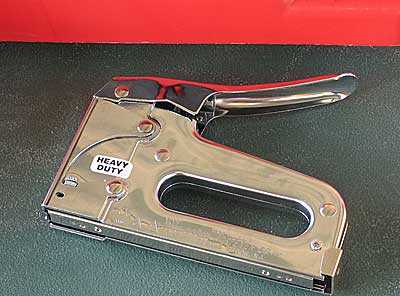 A stout stapler is a must. Forget the electric ones and just use one like this.

Binoculars
Believe it or not, there are times when a small pair of binoculars comes in very handy at the range. A month ago a buddy of mine bagged a large bobcat on our range because he was able to identify it under the trees while shooting with iron sights. In some countries like Germany, it’s considered extremely bad form to use a scope sight in place of binoculars. Think about it — under that scope there’s a firearm!

Well, that’s about it. These are the essentials I always take to every range. Of course, I carry insect repellant and hand warmers, depending on the season, but these four items are with me all the time. Other than my spotting scope, this is how I shoot.