Regular blog reader Vince is regaling us with another great guest blog about a gun he’s repaired…although this isn’t about the repairs he made. He never fails to inform and entertain! So, sit back, relax and enjoy! 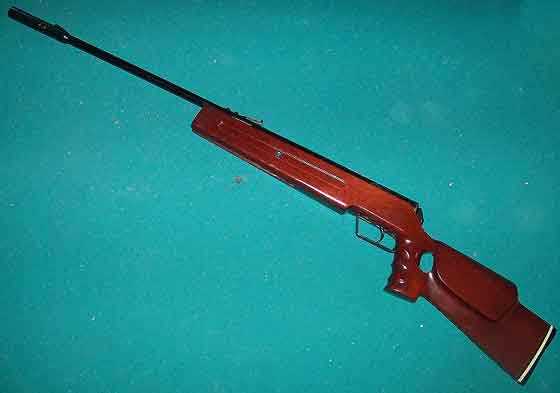 So, where to begin? I don’t quite know how to write an introduction to the this gun simply because I know virtually nothing about it. In fact, everything I DO know will fill no more than a single paragraph on an airgun blog…and not a terribly long paragraph at that:

The Cabanas rifle was manufactured by Cabanas Industrias, S.A. in Aguilas, Mexico, and was imported and distributed through Mandall’s Sporting Goods of Scottsdale, Arizona. The release of these models may have been announced at the 1989 SHOT show, and this particular rifle might belong to the RC-200 family of airguns from that manufacturer.

The Cabanas company IS relatively well known for making primer-powered guns in both .177 and .22 calibers. These were known for being as low-powered as an air rifle but less accurate, more prone to fouling than a regular .22 and yet classified as a full-fledged firearm in the eyes of the ATF.

In other words, the worst of all worlds. Little wonder they didn’t last.

Where does that leave this thing? Was it a last-gasp effort by Cabanas to salvage some workable market share in the United States before completely getting swamped? Cabanas went under in 1999. If this rifle does, indeed, date from 10 years prior, it hardly qualifies as a “last gasp.” But, no doubt, it was part of an effort to expand their US market. Given the dearth of information on these models, it wasn’t a very successful effort at that.

That is, if you define success only in a commercial sense. Because this particular air rifle is a very likeable gun. Before I get ahead of myself, though, let me introduce this particular example.

I first heard of this gun when blog reader Wacky Wayne mentioned that he had a certain type of “Cabanas” he wanted me to do something with. I asked him what in the heck was he growing in those raised flower beds of his! But after we cleared up THAT little misunderstanding, I said “SURE! I’ll work on anything!” A short time later, the Cabanas arrived at my doorstep. I worked it over, sent it back, he shoots it a couple of times and then sends it BACK to me to keep in exchange for some more work. Which means that this orphaned waif is now mine.

Wwhenever I see another air rifle, I’m always on the lookout for signs of cross-breeding or design commonality. Since this gun is from Mexico, my thoughts immediately turned to Mendoza. Those thoughts were reinforced the first time I broke open the barrel and compared it to its Mexican cousin. 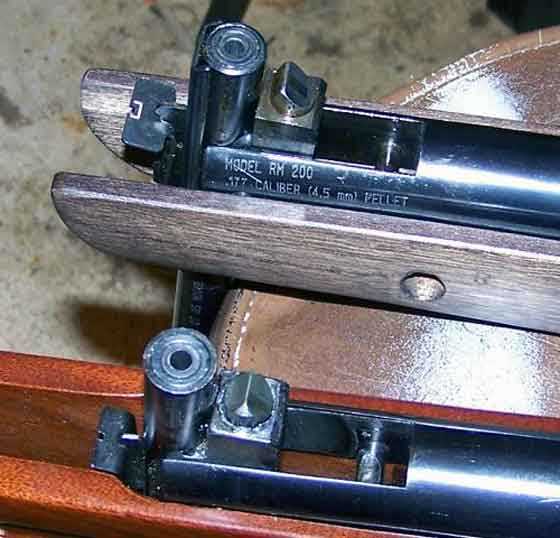 Mendoza at the top, Cabanas at the bottom…kissing cousins!

The scope grooves milled into the spring tube are typical enough, but the gun’s potential Mendoza-ness was further reinforced by the presence of an oil hole. 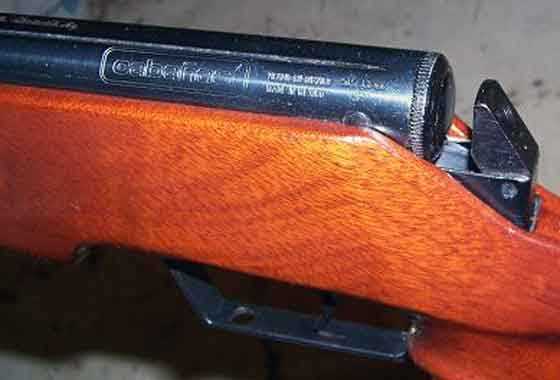 On the other hand – the automatic safety is definitely un-Mendoza like (safety engaged). 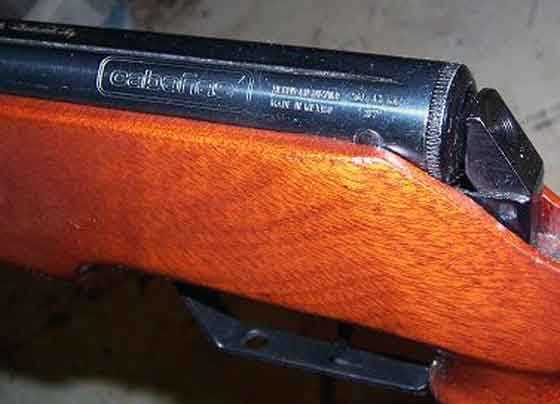 It’s kind of clunky, really. It seems a bit odd to have a large block of metal sliding back and forth like that, and it doesn’t work all that smoothly. And that’s AFTER messing around with it to improve the feel. Worst of all, it’s not resettable which, frankly, is inexcusable on a gun with a simple, direct-sear trigger like this one. Small matter, though. B. B. has talked me out of relying on safeties, and the more I shoot the more I’m convinced that they really are superflous annoyances for the most part. This safety is not a terrible bother to pop off, so it’s not a major gripe.

Otherwise, the gun seems well made, with steel for everything and no apparent chintzy compromises in the name of fads, mass-marketing, or penny-pinching. The Cabanas is a very solid gun.

The reddish stock, to my eye, is oddly evocative of something I can’t quite put my finger on. It sorta reminds me of the wood furnishings that might be found in a classy 1960’s bar or smoking room frequented by older, well-dressed men. Or something like that. Shaping and finishing does show a decent level of workmanship (if a bit blocky in shape), but the thumbhole is a bit small, I think. It’s marginal for me, I can easily see where larger shooters might find it genuinely undersized.

It’s a handy rifle at 6.50 lbs. Cocking effort maxes out at only about 20 lbs. (peaking right when the sear is engaged). Trigger effort (direct sear) is on the high side at about 7 lbs., but that’s really the only downside to shooting this gun. 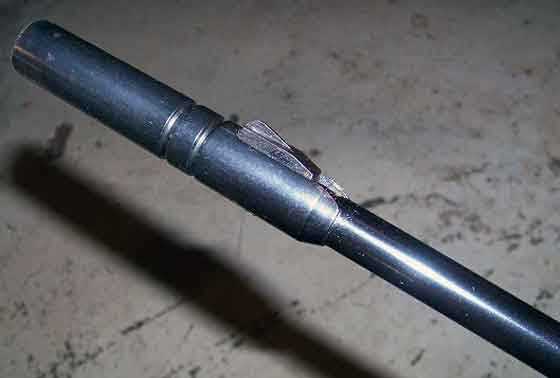 The sights are low & relatively close to the centerline of the barrel.

I especially like the styling of that front sight — very sleek, the way it’s almost hidden by the muzzlebrake. But as for function? Middle-of-the-road, at best. The biggest problem was that at 10 yards, I ran out of height adjustment. It still tended to shoot low with the rear sight on the highest notch. The locking-screw type windage adjustment (a la Crosman 1077) is also a bit cheap but less of an issue. Sight picture is good, though, with the front blade sized well for the rear notch.

At this point, I’m ready to start shooting the gun, and y’all might be expecting what B.B. does…velocity tests followed by accuracy. I’m taking a slightly different approach and doing the accuracy test first, since there’s no reason to chrono the gun with pellets that shoot like poo. So, accuracy testing is up first.

Being a naturally boring person, I decided to run this test with a set of very run-of-the-mill ammo. Budget-concious pellets are definitely on the menu, and I’ll round it off with Premier 7.9 grains. 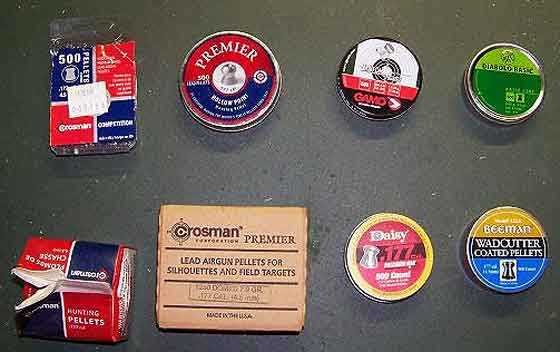 The pellets I used for the record.

Half the pellets are Crosman, beginning with the old Copperhead Competition wadcutters (shown upper left) that have been a staple of indoor shooting for 20 years or so. The pellets below that are Crosman Hunting Pellets, which are pointed – but not with the straight-sided cone common to pointed pellets. This one looks more like a Premier that’s told a lie or two to the pellet packer at Crosman. And despite the fact that they’re cheap — $14/1250 at Pyramydair. I find that in some guns they shoot about as well as doomed Premiers even at longer ranges. This performance starkly contrasts with the more expensive (and conventionally designed) pointed Premiers, which I’ve found to be absolutely horrible.

The next column shows the Premier Hollowpoints that I’ll be testing and an old box of standard doomed 7.9-grain Premiers. Generally, I find that the HP’s shoot just about as well, I’ll be curious to see if the same holds true here.

The last two are the RWS Diablo Basic (used to be the “Geco”) and the not-really-Beeman-because-they’re-made-in-China Beeman Wadcutters. The RWS pellets look to be very well made, and some guns just love them. I generally have a bit less success with the Beeman pellets — but it depends on the rifle.

Now, as to the testing procedure. I planned to put 5 shots of each pellet through the gun before shooting two 5-shot groups side by side. This will get the barrel “used to” the new alloy before shooting for the record, something that I’ve found to be significant. All shooting will be done over about 10 yards in my basement, so wind will be a non-issue.

I started rattling off groups using the open sights and immediately identify 2 problems. First, I’m tearing up the bullseye. While this sounds good, the fact is that I prefer to have the group OFF the bullseye, so I’m always sighting on a clean target. I don’t want to mess with the windage because there’s no easy way of setting back to exactly where it was, and I didn’t want to lower the sight because my target paper put the lower dots near the bottom of the trap. Second, my eyes have managed to get even WORSE than the last time I did any serious testing.

And then I found the loose stock screws. So, I threw out all the targets I already shot, tightened the screws, mounted a 3-12x40AO Centerpoint scope and dialed it in.

First up are the Crosman Wadcutters:

The Crosman Hunting Pellets don’t disappoint and punch out passable .40″ and .38″ groups. Which, on balance, is a bit better than the Premier Hollowpoints:

The Daisy Precision-Max pellets didn’t live up to their name:

At .58″ and 1.06″ they did the worst average group out of this gun, although the new Gamo Match pellets were certainly vying for top dishonors:

The real star in this gun was the RWS Basic (not an uncommon occurrence) which went into a pair of .33″ groups:

In my mind this just further confirms them as one of the best cheap pellets out there. Beeman’s best of .31″ was slightly better:

…but it’s worst of .53″ would seem to indicate that it’s not as consistent.

With the accuracy test over, I’m now looking at putting some shots over the chrony.

I know that this review isn’t really useful as a review for a potential purchase. Considering it’s rarity, you’re not very likely to find one in the used gun market. I’ve even wondered if this one was a sample for the importer, and that no others were even brought into this country. Next to this thing, the Sterling is as common as a Toyota Corolla.

Since all I’m doing is a curio writeup, I decide I’m only going to do one pellet to show the general velocity range of this gun. I decided to use the most accurate pellet of the test — the RWS.

Ten shots across the chrony yield the following results:

A 16 fps spread is pretty good, and the muzzle energy of 7.5 to 8 ft-lbs is sufficient for plinking out to 40 yards or so.

Overall, this Cabanas is an enjoyable, mid-range airgun that seems to be a bit easier to shoot and a little less pellet-fussy than my experience with that other Mexican brand. A better trigger (like, for example, the Mendoza unit) would make it positively delightful.

That wraps up the Cabanas. And, now, if I ever do a search on this rifle again I’ll probably get twice as many hits on it as I did before… because half of them will point me back to my own review! Maybe some day I’ll be able to dig up a bit more on this; and if ANYone has any more information on this pup, I’m all ears.