Today’s report is both an object lesson, and a summary of what we’ve been studying for so long — the fact that ballistics, though often difficult to understand, are also precise and repeatable. It may not sound like that until I summarize at the end; but trust me, this is a lesson for all airgunners.

As the title says, this report is about my new AR-15. If you’re just finding this report for the first time and are interested in the AR, you owe it to yourself to read the first three parts of the report, linked above, before reading today’s message.

It was another very calm day at the range — perfect for testing a little experiment I’d cooked up. As you know, I do not shoot factory ammunition of any kind in my rifle. I did prove that it will function with standard factory 55-grain Remington .223 rounds in the last report, but the accuracy was horrible. I put 10 shots into about three inches at 100 yards. So I use the word “function” here to connote that the rounds fed through the magazine and action smoothly, as designed. I would never consider shooting them, other than for this test!

My load has been a 77-grain pointed bullet and a load of Varget gunpowder. That has demonstrated the ability to put 10 shots into less than one inch at 100 yards on many occasions. But another bullet — a 68-grain Hornady Match hollowpoint — produced the best 10-shot group I ever got with the rifle. It measures 0.562-inches between the centers of the two bullet holes farthest apart. 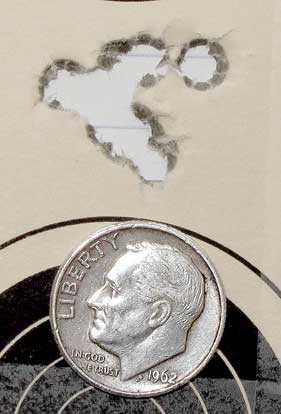 The experiment
So, I dreamed up a little experiment. I would shoot another group with the same load, only this time I would also do some other things to improve the group. For starters, I would only select cases that had the same headstamp. Different companies make .223 ammunition, and their cases differ a little. Even though they all meet the specifications for the .223 Remington case, there are tiny variations that occur from the differences in the manufacturing processes each company uses. Add in the possibility of different materials at the beginning of the manufacturing process and you get small variations. The specifications allow for this, as long as the gross tolerances and performance specs are satisfied. 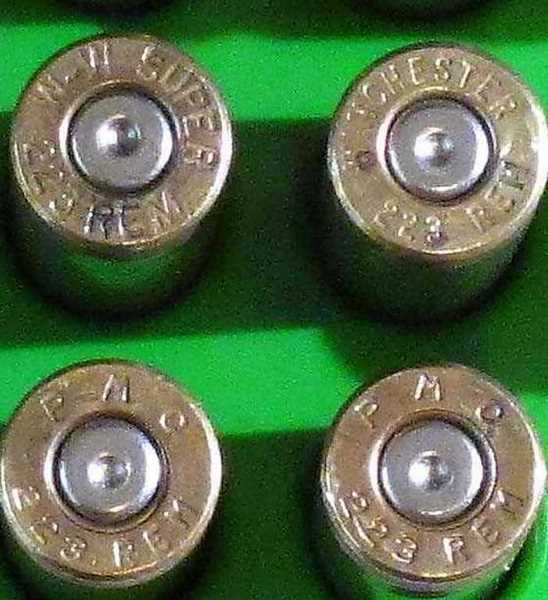 These cases were picked up off the ground at the range, so they came from several different manufacturers and were made at different times. They’re not uniform at the lowest level.

Reloading cases with different headstamps, therefore, sets up the possibility for small variations in performance. Those differences probably don’t matter to a deer hunter; but to a guy trying to put 10 bullets in the same place, they can matter a lot.

So, I pulled 10 cases with the Federal Cartridge headstamp and set them aside for special treatment. Then, I selected a second lot of Federal cases and put them into a second group. A third group was comprised of cartridges with random headstamps.

Next, I trimmed all the cases to the same length — 1.760 inches. To this point, I hadn’t trimmed a single case, and semiautos like the AR-15 are known for stretching their cases.

Following that, I reamed the inside of the necks of the 10 special FC cases. I then loaded them with the 68-grain bullet and Varget powder that had produced the best group. The other cases I loaded with 77-grain bullets and Reloader-15 powder that has also shown a lot of promise. I wouldn’t call them control groups because they were reloaded with a different charge and bullet, but I was certainly interested in how well they did.

The moment of truth!
After warming the barrel with the 10 mixed cases (which got a 1.225-inch group), I started shooting the select cases with the good bullet and reamed case necks. The second bullet went into the same hole as the first. So did the third. When the fourth bullet enlarged the hole only a little, I suspected I was finally onto something. Shot 5 didn’t seem to make the hole any larger and I almost stopped shooting at that point. Never in my life had I ever put 5 shots from any rifle into 1/8 inch, which was what I estimated this group to be through my 30x scope sight. But fair is fair, so I pulled the trigger on shot 6. It went into the same hole, but enlarged the group noticeably. It was now about 1/4 inch between centers.

I was on a roll, and what a story this was going to make. So I lined up the crosshairs and fired shot 7.

“Oh somewhere in this favored land the sun is shining bright;
The band is playing somewhere, and somewhere hearts are light,
And somewhere men are laughing, and somewhere children shout;
But there is no joy in Mudville — mighty Casey has struck out.”

Shot 7 landed apart from the first six and thumbed its nose at me through my powerful scope. So, I put my head down and finished the group. Two more shots were also apart from the main group and had the ironic audacity to land together, as if to say they were in the right place and all the rest were wrong. And one bullet managed to nick the main group, enlarging it by a considerable amount. In the end, I’d put 10 shots into .859 inches — a decent group; but when compared to the 0.198 inches of the first 5 shots, not that respectable. 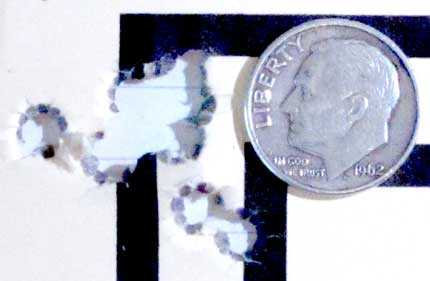 What happened?
Here was yet another group that contained within it a smaller group of respectable size. But why had at least 3 of the 10 bullets gone so far astray? Hadn’t I done everything in my power to make these cases identical and as perfect as possible?

I had to wait till I got home to sort the 30 cases because my eyes were not good enough to discern those with the reamed necks. They were reamed on the inside and now the tiny scratches were filled with burned powder ash. But under the magnifying hood and strong lights at home I found them, one at a time. They all had the tiny scratches from reaming. But there was a problem. There were only 7 cases with the FC headstamp on them. None of the rest of the FC-stamped cases showed the signs of having been reamed. I looked among the odd headstamps, and there I found the remaining 3 reamed cases. Somehow, I’d mixed them up during the reaming operation and the non-FC-stamped cases got mixed in with the others.

Three! An interesting number, because it matches the number of bullet holes that are not in the main group. And that’s today’s lesson. It’s not a lesson about how to do something — it’s a cautionary tale about what not to do. That’s what we learned today. You can’t be too careful when you test things, and you have to check things twice and even three times before you pronounce them as good.

That is what I failed to do this time. And you know what comes next, don’t you? I have to rerun this test and next time make sure everything is done correctly.

I’ll make a prediction. If I do everything correctly as I’ve said here, I predict that this load will be able to put 10 rounds into a group that measures under 1/2 inch at 100 yards. 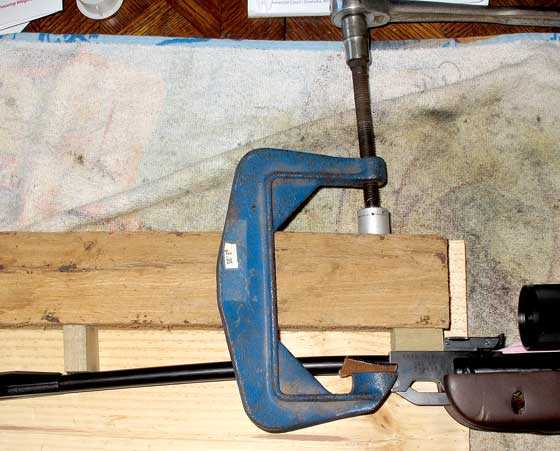 What is trigger-pull and why do we care?