The most refreshing thing about this blog is that we keep getting new readers, while retaining a large percentage of our long-time readers. That allows me the occasional opportunity to share an inside story with several hundred of my closest friends. Today is such an occasion.

We got this comment yesterday morning from reader Jp:

BB, got another question: You ever heard of using a solid pellet in an airgun. A bullet, I guess would be the correct term. Considering an airgun tends to shoot like lower velocity black powder (usually subsonic, I assume), maybe use something like a Minnie-ball shot. Know anything about this, how it works, how it doesn’t work, is it worthwhile or even a good idea? Jp

From his remarks, it sounds like Jp may have been a blog reader for some time. And he asks a question that I’ve heard before — not always from the consumer side of the sales counter. Many manufacturers have ventured into the realm of solid pellets without knowing what they’re doing or the ramifications of using such technology in an airgun. I would like to address this issue in some depth today.

A solid pellet is exactly what Jp says — it’s a bullet. It does not have the stabilizing feature of high aerodynamic drag, so all its stabilization must rely on the rifling-induced spin. From tests we did with a smoothbore pellet gun, we know that aerodynamic drag does cause a pellet to fly true for at least the first part of its flight. See the results I got at 10 meters with the Diana model 25 smoothbore.

But that’s not a deal-killer because we also know that a solid bullet (and that’s what a solid pellet really is) can be accurate from spin, alone. I’ve gotten sub-one-inch 10-shot groups from my Winder musket shooting standard-speed .22 shorts at 50 yards, and that rifle has a twist rate of 1:22 inches. Even when the 29-grain lead bullet exits the bore at 1,000 f.p.s. (or less because the Winder has a 28″ barrel that cuts velocity), it can still be accurate from just the spin. We know that an air rifle twist rate is really 1:16 inches, which is faster than the 1:22 inches that’s the standard twist rate for the .22 short cartridge (actually, the rate varies by manufacturer, from 1:20 to 1:22 inches).

If a powerful air rifle can fire a solid “pellet” weighing about 30 grains at 1,000 f.p.s., it should be accurate. Right? I mean, wouldn’t that be what we’ve all been looking for: An air rifle that fires with the force of a .22 rimfire. This is the thinking that certain pellet manufacturers have undertaken in recent years when they got their great ideas to make solid pellets. Yet, I’ll bet a dollar that NONE of those pellet designers have ever shot a muzzleloading rifle.

But you readers have watched me shoot plenty of muzzleloaders. I guess the Nelson Lewis combination gun is the one you remember the best. Know what you have to do with a muzzleloader? You have to pound the bullet into the rifling to get it into the barrel — that’s what. For that, you use a tool called a short-starter. Every muzzleloading guy knows what that is. 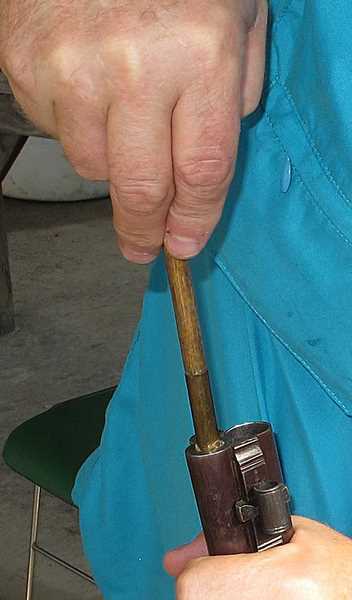 This is me pushing a bullet into the muzzle of the Nelson Lewis combination gun’s rifle barrel with a short starter. They make it with a wide ball end so you can put some force behind it! And this is a patched bullet — not a naked lead bullet that needs to be engraved by the rifling.

Guess what?
If you try to load a solid pellet into a rifled barrel, YOU become the short starter. Or at least your thumb does! Back when a certain solid pellet called a Piledriver first came out, they sent a sample batch to AirForce Airguns, and yours truly had to test them in a Condor to see if they had any merit.

Test them? Heck, I couldn’t even load them! I finally resorted to using a penny on the end of my thumb to push the pellet into the rifling, and even that didn’t work very well. You can sit on the sofa and talk about the benefits of solid pellets all day long, but let’s see how your mind changes when you actually try to load one into a gun! 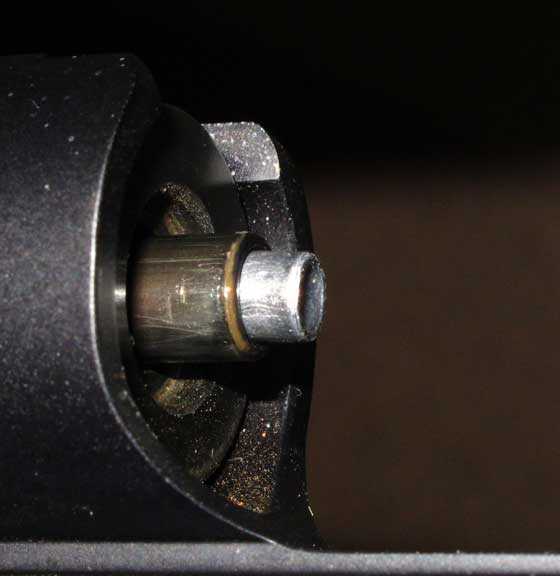 When you try to load a solid pellet like this 30-grain Eley solid into the breech of an air rifle like a Condor, as soon as it contacts the rifling, it stops cold. This is as far as it goes in. 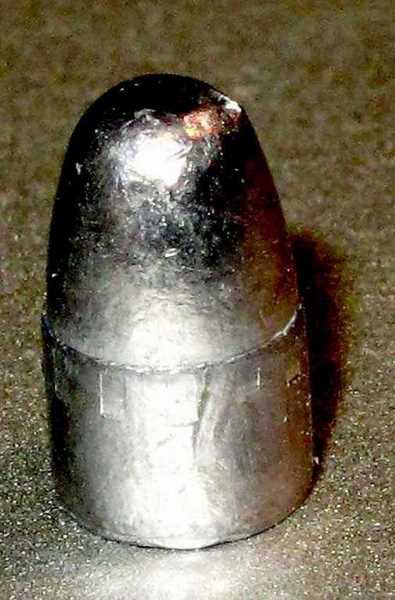 Here’s the proof. Look at the short grooves at the top of the cylindrical section of the pellet, where the rifling has started to engrave the lead. This is the same pellet shown in the photo above.

At this point, the engineers will tell you that the diameter of the pellet’s body is critical. If you can just get it right, these pellets will load. Well, I’ve been testing solid pellets for at least 15 years in dozens of different airguns, and to-date I haven’t seen one that was right. While I was at AirForce, I worked for over a year with the Pelletman (a maker of many kinds of solid pellets), trying to get the dimensions correct…and we never succeeded.

But wait…there’s more
Jp asked a question that I know many other folks have been wondering about. I say that because this subject comes up a lot at the airgun shows. So, I’m not going to leave it here.

I will actually load some of these pellets into a Condor, which is one of the only air rifles powerful enough to shoot them anywhere near the same velocity as a .22 short bullet, and we’ll see just how accurate they are. That’s why today is Part 1.

If you have thoughts, stories or questions, now is the time to speak up.