This report is a traditional Friday blog for all you who enjoy the vintage airguns I sometimes get to test. I enjoy them, too, but I try not to put too many into the blog because most readers cannot buy these guns. I don’t want to create a lot of dissatisfaction.

I’ve reported on the Falke 90 underlever that reader Vince was kind enough to repair and tune in his 3-part report, It’s not my Falke. Then, I tested the gun for you in a separate 4-part report titled, Falke 90 test. Well, today I’m starting another report on a Falke model 70 breakbarrel rifle.

The distinctive falcon logo is stamped on the spring tube end cap.

All Falke airguns are uncommon in the U.S., but the models 80 and 90 are beyond rare. From the model 70 on down in declining numbers (60, 50, 40, 30, 20 and 10), however, we encounter a number of more common breakbarrel spring rifles that, while not common, are also not rare. They were never officially imported into the U.S., as far as I have determined, but have entered in a number of ways through private transactions. They’re very similar in quality and performance to their Diana cousins of the same early 1950s timeframe. The separation between the model 70 we’re looking at today and the model 80, while only 10 numbers apart, is the difference between a chicken egg and an egg by Fabergé.

The model 70 might also be thought of as Falke’s answer to the Diana 27. In other words, a plain airgun, but also one with high-quality features like a locking breech and an adjustable trigger. The 70 is slightly larger than the 27. It’s 42-7/8 inches long overall, and that length is helped primarily by the 19-inch barrel. The weight is 6 lbs., 10 oz. The pull is 13-3/4 inches, making it suitable for adults and older children.

When I looked in W.H.B. Smith’s book, Smith’s Standard Encyclopedia of Gas, Air and Spring Guns of the World, I saw slightly different specs for the model 70 listed there. There, the rifle was just 37 inches long, and the photo shows a pistol grip that’s rounded at the bottom. It was also checkered; but because mine’s been refinished, I can’t tell if it may have been originally checkered. I doubt that it was, though, because it’s still robust after refinishing.

The rifle’s barreled action is blued steel, set into a slim beech stock that has European finger grooves on either side of the forearm. The breech seal is leather, giving every indication that the piston seal is leather, as well. The metal on my rifle is turning to a plum-colored patina over the years, and the stock has been recently refinished. It was a good job, but I have no idea how much wood was removed in the process.

The rear sight is adjustable for elevation by turning a centrally mounted wheel, but there is no adjustment for windage. However, both the front and rear sights sit in dovetails that run perpendicular to the bore, so some windage adjustment is possible by drifting them sideways in their slots. The rear sight blade sits loose in the rear sight base, which may affect accuracy when I shoot the gun. 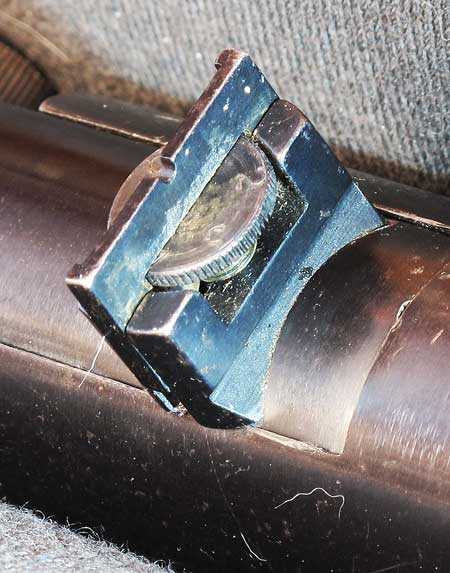 The rear sight adjusts for elevation, only. The sight blade is loose in its mount.

The front sight is a post with a bead at the top — the type the Germans call a Perlkorn. The intent is to put the bead in the center of the rear sight notch and also on whatever you wish to hit. It’s not a precision sight, but it can become more precise if you hold it at the 6 o’clock position on a target. But the movement of the blade that contains the notch will affect things, I’m sure.

The trigger adjusts, too, but I remember getting some sort of warning from airgun collector Don Raitzer at the Roanoke airgun show when I acquired the rifle, so I may not adjust it. Right now, it’s a single stage that has a very long but light pull and no positive indication before it lets off. I’m thinking the adjustment might affect the sear engagement area, and I don’t want to diminish that in any way. 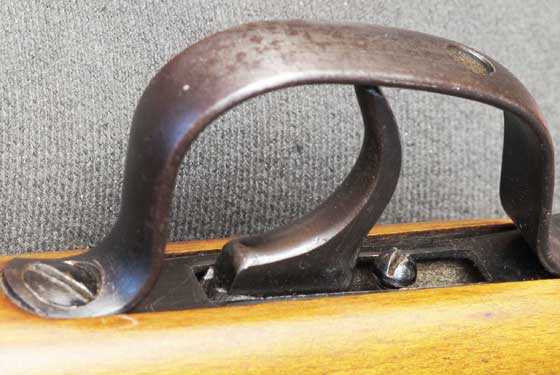 The single-stage trigger adjusts, but I think the sear contact area is affected, so I’m going to pass.

The breech is locked by a spring-loaded lever located on the right side of the breech. To unlock it, press in (push it back toward the butt) on the knurled knob while breaking down the barrel. It takes 2 hands to open the breech. When the barrel’s closed, the lock snaps shut and the breech is solid!

The breech is also notable for having both a pivot bolt and a locking screw that fits into scalloped notches cut into the rim of the bolt head. It’s a hallmark of quality that existed in the 1950s. Oddly, though, the pivot screw only has 2 cutouts for the locking screw to fit; so in its original form, it has to be turned a minimum of 180 degrees every time. Someone has used a small portable grinder to add a small notch where it was necessary, and now the pivot bolt head has a third notch in what seems to be the right place. 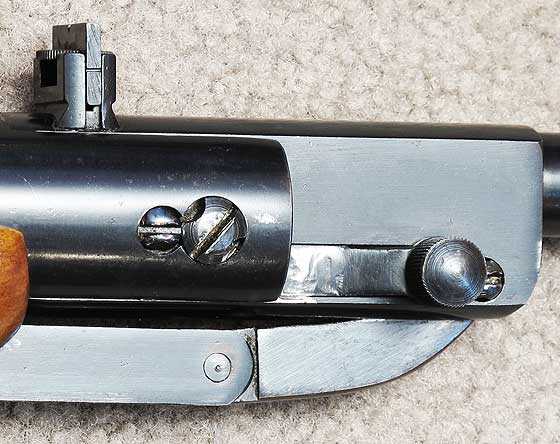 The breech is locked and must be unlocked to break the barrel. Note the locking notches in the pivot bolt head. And you can see the articulated 2-piece cocking link in this picture, also.

The cocking link is 2-piece and articulated to allow the rifle to be cocked without a long cocking slot in the forearm. That reduces vibration in the stock, adding to the rifle’s overall feeling of quality when fired.

This is a quality air rifle from the 1950s, and the quality shows through. Compared to modern air rifles, the features on this one far exceed what you normally see. The power is much lower than most of today’s rifles, but that just ensures that the rifle fires smoother.

Of course, there’s no provision for a scope, because when this rifle was made, people weren’t scoping their air rifles. I wouldn’t want to scope it, either. This is just a pure fun rifle that’s light and smooth and fun for the whole day. Why ruin it with a scope?

Smith lists the velocity at 450 f.p.s, but of course that was with the crude heavy pellets of the 1950s. I’m sure a modern pellet will step that up, though; by how much, I can’t say. Someone has at least lube-tuned the rifle recently, so it should be performing its best right now. I note when cocking that the cocking stroke is very short — just past 90 degrees, and the mainspring tension builds very fast in the last half of the stroke. In that respect, this rifle differs entirely from a Diana 27 that cocks with an even stroke and no spring buildup (greater effort required toward the end of the cocking stroke).

I’ve been waiting to test this rifle since the Roanoke show. Until today, I had not fired it once! You and I will get get to explore this fine air rifle together!

While reading the other reports on the Falke 90 I cite above, I discovered that I’d promised to test the 90 with a dot sight to see if accuracy would improve. That was way back in January and, of course, I haven’t done it — yet! Look for that test in the near future!