Today, we’re going to look at how to adjust the Diana model 72 trigger. I know this report is needed; because when I searched for information on the Diana model 72 target rifle, this blog was at the top of the list! I wish I had an owner’s manual for this little rifle, as I’m sure clear trigger adjustment instructions are in there. Lacking that, let’s first look at the trigger.

The Diana 72 trigger
As you’ve learned, the Diana model 72 youth rifle is just a model 6 target pistol in a rifle stock. Most things remained the same, but the trigger is one feature that had to change. People will tell you this rifle trigger is identical to the pistol trigger, but the presence of the long linkage from the trigger blade to the sear adds complexity the pistol trigger doesn’t have.

Kind of surprising, no? What looks like the trigger is nothing but an isolated lever. Under the large hole in the flat plate several inches to the left is where the actual trigger lies. The arrow points to the trigger adjustment screws.

What you thought was the rifle’s trigger turns out to be just a lever sitting out by itself and connected to a lot of machinery located several inches away. The linkage that connects the blade to the rest of the trigger mechanism is long and springy. It’s why this trigger can never be set to operate as crisply as a true target trigger. But some small amount of adjustment is possible, and this trigger can be very nice.

The trigger adjustment screws can be seen through an oval hole in the underside of the forearm when the rifle is assembled. There are three screws. The one on the right is actually 2 different screws. On the left is the locking screw that locks the large screw on the right. Notice the very large screw at the far left of this picture? That’s the stock screw and has nothing to do with the trigger adjustment. 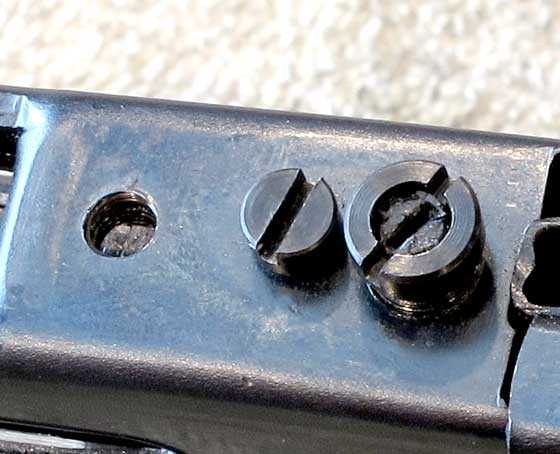 BUT — Please read this and believe it. These two screws — one inside the other — act in unison. As one is adjusted, it affects the other. It is extremely easy to adjust them OUTSIDE the safe range, in which case the trigger stops working altogether. When that happens the gun can be cocked, but cannot be fired!

To be safe, when that happened to me several times, I always broke open the action so the anti-beartrap would prevent the gun from firing. Then, I adjusted the 2 screws together until the gun worked once more. I did this several times to learn what each screw does. One time it took a full 10 minutes of working with both screws before I got the gun firing again!

Caution: This is very difficult
If you’re afraid of how sensitive this adjustment is — good! Stay away from it! The large hollow screw has a very small range of adjustment and can get out of the range very easily. But if you want to try this, below are the instructions.

Adjustment directions
First adjust the length of first-stage travel (the small screw inside the large one). This can be done with the second-stage screw (the large hollow screw) locked in place. Turning the small screw out (counterclockwise) lengthens the first-stage travel. Turning it in (clockwise) shortens the first-stage travel. I tried to eliminate the first stage altogether because I know some people like it that way, but I was unable to get rid of the last little bit of travel. Formal target shooters use two-stage triggers almost exclusively, so perhaps Diana thought some travel was needed; but it also might be necessary to have some travel in this particular trigger for safe operation.

After you have the first stage where you want it, you can adjust the second stage. First, unlock it by loosening the locking screw to the left. I found the adjustment range of the large, hollow (second stage) screw extremely limited. It was possible to get out of the range with as little as one complete turn of the large, hollow screw.

I played and played with this adjustment mechanism and came to the conclusion that not only are the screw turns limited — the weight range of the trigger release is also very limited. That’s because this trigger blade is connected by a springy linkage.

Mikeiniowa
If you search the internet for directions on how to adjust the Diana model 72 trigger, you’ll discover that a good many folks who are experts with vintage airguns avoid this job. Several of them recommend sending your rifle to our blog reader Mikeiniowa, who apparently knows this rifle quite well. I hope he reads this report and comments.

Status of the rifle
The model 72 is now ready for accuracy testing. Although the trigger isn’t match grade, it’s as good as it can get– and it isn’t that bad.

The Crosman S1008 Air Mag is a nifty shooter! 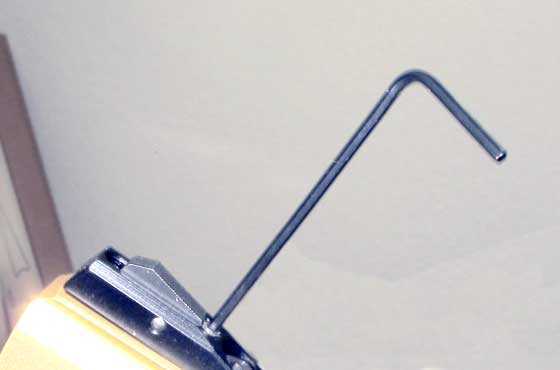 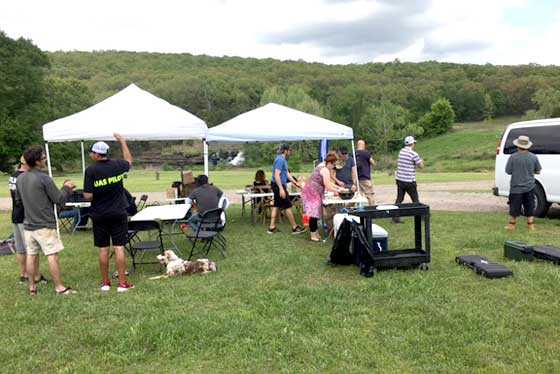