Today’s report is a guest blog from a new reader, HiveSeeker. He wants to tell us about a pellet rifle he thinks highly of. This is a complete report with the description, velocities and test targets, so I am breaking it into two sections. 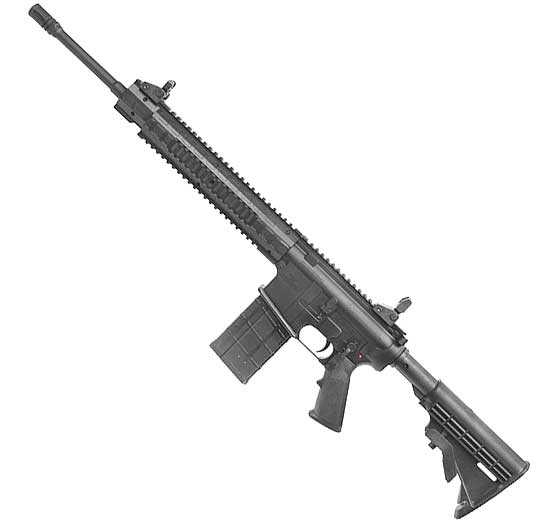 Description
Considering the astonishing array of military rifle lookalikes in the airsoft world, it’s a shame that there are so few choices among airguns. But those who would enjoy shooting an accurate reproduction pellet rifle might consider the Winchester MP4 CO2 rifle. Styled closely after the AR15, this .177 airgun features a full-metal receiver, quad Picatinny rail forearm, working selector switch (safety), realistic magazine catch and adjustable stock — lots of authentic moving parts that are only fixed plastic on a number of the other military replicas. The forward bolt assist is only ornamental, but the charging handle (hereafter called the bolt) is fully functional. This also happens to be one of the few semiauto replica pellet rifles available. My ex-military brother-in-law experienced a fair amount of nostalgia shooting this rifle. 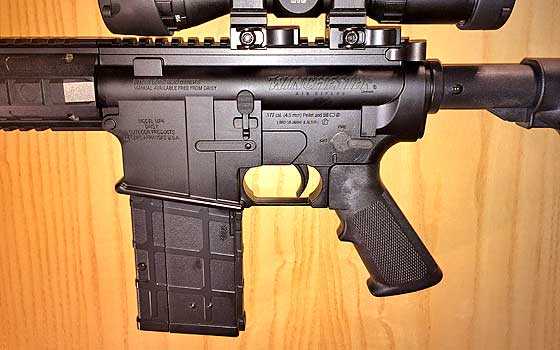 The selector switch, magazine catch (on right side of gun) and adjustable stock are fully functional. Note the position of the fully inserted CO2 clip, which looks like the ammo magazine.

Sights
The first thing you’ll want to do after unboxing the MP4 is remove the cheap plastic open sights — among the unfriendliest I’ve ever squinted through. They’re not individually adjustable, and the manual doesn’t include one word about them. Just know that you can raise or lower the aiming point by moving the front sight closer or farther in relation to the rear sight; they apparently cannot be adjusted for windage. [Editor’s note: The manual and Winchester’s website state the rear sight is adjustable, so we asked the manufacturer about it. They say it’s not adjustable and plan to remove that statement from their website and from future reprints of the manual.]

A red dot sight works well (and looks tacti-cool) on this gun, though I primarily used a Leapers UTG 3-9×32 Bug Buster scope, which also looks very good. The all-metal receiver provides a very solid platform for mounting optics compared to the plastic receivers of some other contenders in the military pellet rifle arena. Despite being a low-recoil CO2 gun, the bolt recocking mechanism apparently generates some vibration. As a shooter who admittedly tends to over-tighten everything, I was stunned to find my scope mounts loose after about 300 shots. Keep an eye on this.

You’ll want to replace the plastic open sights right away. 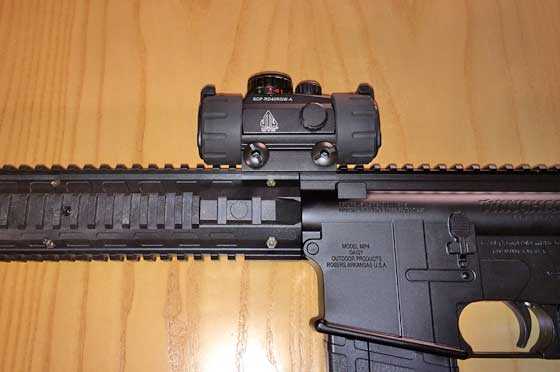 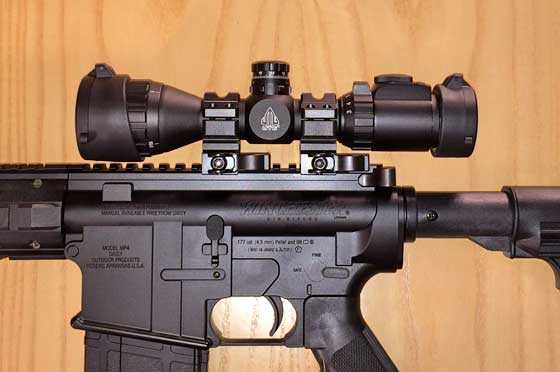 The MP4 looks ready for combat with either a red dot sight or compact scope. That quad Picatinny rail is just begging for more accessories!

Loading
This gun requires two 12-gram CO2 cartridges. You can spend all day trying to “remove the cover from the base of the CO2 clip by inserting a finger into the ammunition magazine hole and pulling the cover off” (as the manual suggests). There’s no hidden release, and the instructions of course mean the larger CO2 clip hole to the right (go ahead and laugh, manual-spurners).

My CO2 clip fits very tightly in the receiver; and the first time I tried to shoot this gun, it took me a couple trigger pulls to realize the clip was not seated all the way. Look closely at the photos to see how far the clip must slide in. Clip insertion and removal are slightly smoother now but initially required a fair amount of pressure. 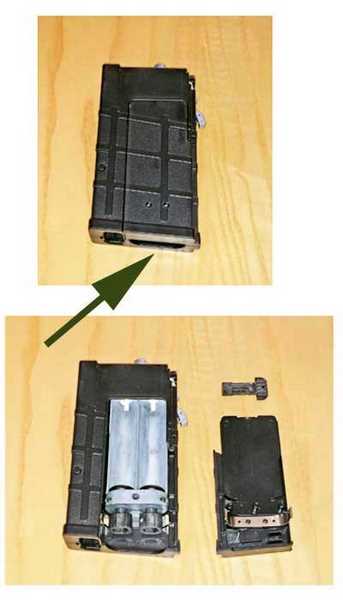 Remove the CO2 clip cover by inserting a finger into the larger hole on the right (not the smaller one on the left) and pulling up. It’s easy if you’re not following the wrong instructions! The plastic key above the clip cover is used for installing the CO2 cartridges.

Ammo feed
Exercise more care in gently inserting the ammunition magazine, however, as the thin plastic of the round rotary drums is easily cracked. A magazine holds 16 pellets or BBs, though this is a bit deceptive. There are only 8 rounds in each end, and you have to perform a magazine flip to shoot all 16 rounds. I suggest buying at least a couple extra magazines. The buttplate I found to be uncomfortably hard, but a rubber AR-15 add-on fit perfectly, as will most other AR accessories, except anything for the nonstandard pistol grip. My next add-on will be a bipod, which should fit perfectly on the forearm. 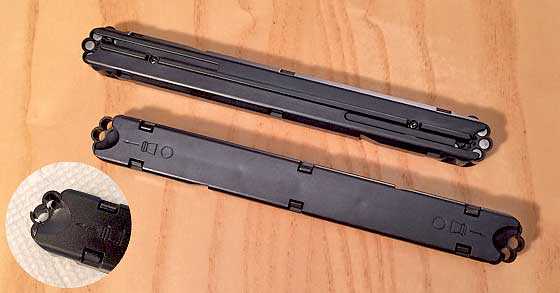 Insert the ammunition magazine gently. The thin plastic of the 2 rotary drums is easily cracked.

If you’ve read any reviews of the Winchester MP4, then you already know that there’s a major ammo feed issue with this gun. Mine is no exception, but so far the problem has been occasional enough to live with — only about 1 pellet out of every 1 to 2 magazines (averaging around 5%) is failing to fire. This is despite carefully using a pellet seat; a tiny ridge inside each individual drum cavity stops the skirt, allowing consistent loading of each pellet. Other owners, however, have experienced a much worse problem, so I’m keeping my gun as is.

Velocity
Let’s look at some chronograph data. My 10-for-$10 test printout from Pyramyd Air with 7.1-grain Beeman Lasers showed a velocity range of 480-538 fps, with an average of 500 fps even. Waaay lower than the listed 700 fps (which I initially figured was just for BBs), as a number of reviewers have pointed out. For my own tests, I shot 10-shot strings at sea level, waiting one minute between shots, using a Shooting Chrony Beta Master. With 4-grain Crosman SSPs I got a range of 683-710 fps and an average of 694 fps in the better of two tests (air temperature was 88˚F).

Interestingly, the other test string averaged a lower 686 fps but contained my single-shot velocity record of 722 fps. So, the Winchester MP4’s velocity stated on the box is correct, and this gun indeed shoots just as fast as Daisy claims — and with pellets, no less. I did not test with BBs, although this gun is designed to shoot them, wishing to save my barrel (and its accuracy) for pellets only.

Testing with a more typical pellet, the 7.9-grain Crosman Premier Super Match, provided expectedly lower velocities: 487-562 fps with an average of 511 fps (at 84˚F). This was much closer to the 10-for-$10 results. Below are my average shot string velocities.


Summary
HiveSeeker continues his test with accuracy results in the next report. I’ll run that next week. 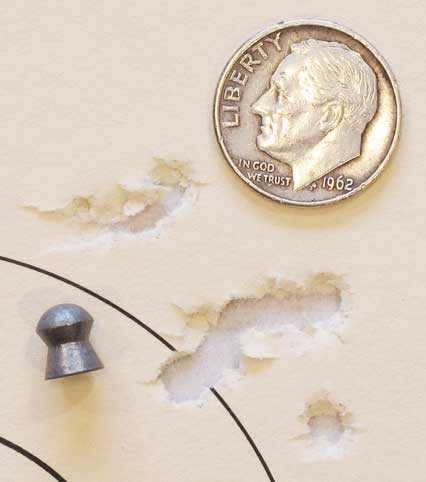