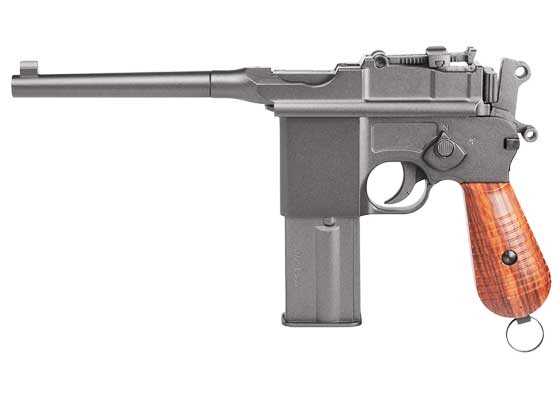 • Here we go!
• The BIG deal!!!
• A full-size replica
• Important note
• Disassembly — don’t do it!
• What I want to see next
• Pyramyd Air Cup
• Airguns excluded from new legislation in California

Here we go!
Many readers have asked me to review this Legends M712 full-auto CO2 BB pistol, and I’m starting today. Because this pistol is so different, there will be full parts 1, 2 and 3.

The pistol I’m testing is the one Paul Capello used for his Airgun Reporter video review. When he sent the pistol to me he left the selector switch on rock ‘n’ roll, so my first squeeze of the trigger sent half the magazine of BBs downrange, and got a request from Edith for a warning before I shot, again.

Let’s back up. When I pulled the pistol out of the box, I immediately noticed it feels as heavy as a firearm. The specs say 3.1 lbs., and on my scale it comes in at 3 lbs., 3 oz. with a CO2 cartridge installed. The outside is all metal except for the grips that look like wood but are actually synthetic. The pistol handles just like a Broomhandle firearm, which means very nose-heavy and ungainly. I owned 2 Broomhandles many years ago, and it’s a feeling you never forget.

The BIG deal!!!
While a beater Broomhandle Mauser C96 firearm in shootable condition costs around $800-1,200, most of us probably don’t have enough disposable cash to buy an M712 firearm. Because it has a selector switch, the firearm is classified as a machine gun under U.S. law, and you’ll pay $200 and wait a long time just to get permission from the government to make a purchase. But that isn’t the problem. Full-auto guns that can be legally transferred in the U.S. have gone off the charts in recent years! You’re likely to pay $12,000-$15,000 or more for one of these M712s today.

And, to be honest, they aren’t practical at all. You certainly wouldn’t want to shoot one full-auto without a shoulder stock if you hoped to hit anything. The Germans called this the Schnellfeuer (fast-fire) pistol, because it shoots so fast you almost can’t hear the individual shots. Watch Paul’s video to see what I mean.

But practicality is not what this is about. Umarex has a killer idea of selling very realistic airguns that mimic the hard-to-find firearms many people desire but will never be able to own. The M712 is one of them — perhaps even the poster-child for the Legends lineup.

A full-size replica
The Legends M712 is a full-sized replica of the Mauser pistol. It measures 12 inches overall, and the barrel takes up 5.50 inches of that. It always looked odd because the magazine is located in front of the triggerguard instead of inside the grip, but remember — this pistol is derived from the C96 Mauser that was one of the first semi-automatic handguns ever made! It was standardized in 1896!

It has a rear sight leaf that adjusts out to 1,000 meters! While there’s no way anyone could expect to hit anything at that distance with this pistol (speaking of the firearm), this sight was designed at a time when modern smokeless powder and jacketed bullets were just beginning to catch on. Like anything new, they were being oversold by their designers, and rifles were typically sighted to 2,000 meters. Handguns like this one were often sighted out to 800 meters and beyond. I’m sure the real shooters of the day knew better, but the fad was so popular that everyone was buying into it. 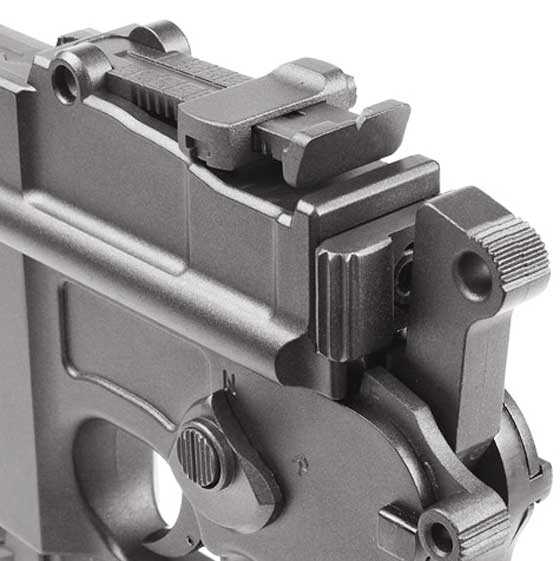 The rear sight leaf adjusts to 1,000 meters (for the firearm — this is just a copy, and those numbers don’t relate to BB-gun distances). You can also see the selector switch that is set to semiauto here.

While the sights adjust up and down, there’s no provision for windage. In the custom of the times, the guns were thought to be “regulated” by the factory and never need sideways adjustment. We know better today; but in keeping with the historical accuracy of the gun, no windage adjustment is provided.

The M712 has a selector switch on the left side that selects semiautomatic or full-automatic fire. On semi, the pistol fires one time with each trigger-pull. On full-auto, the gun keeps on firing as long as the trigger is depressed. Even after the BBs are gone, the gun continues to fire in the full-auto mode. There’s no bolt hold-open device, so you have to pay attention to when it’s time to reload.

This is a single-action-only gun. The exposed hammer must be cocked in order for the gun to fire. Do that by grasping the ears of the bolt and pulling straight back until it stops — exactly like the firearm but much easier. When the gun fires, the bolt comes back and recocks the hammer until the gas pressure drops too low. 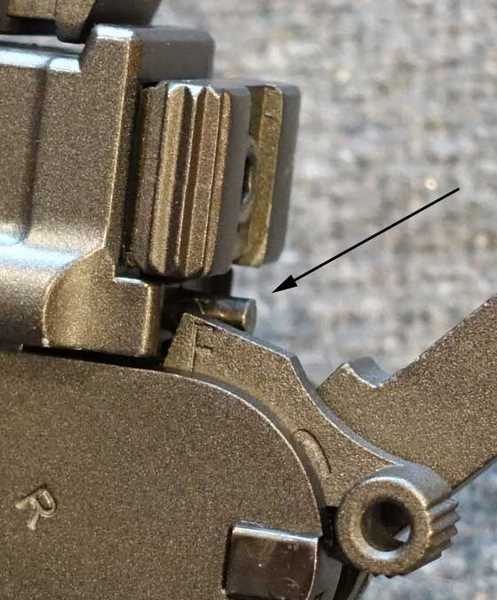 When the bolt is pulled back, it brings this connecting rod out. The hammer needs to hit this to fire the pistol. 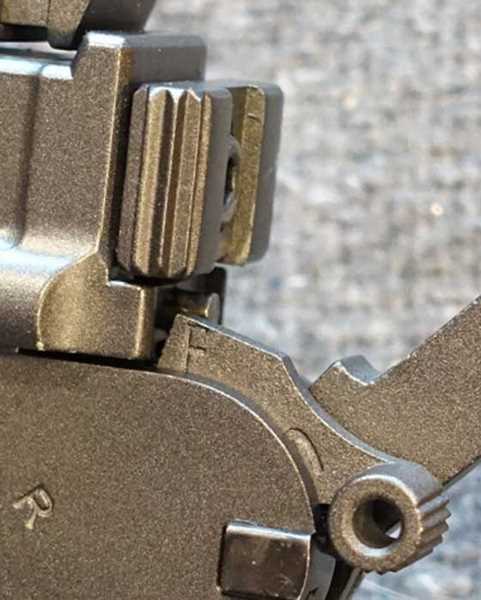 If the hammer is cocked by thumbing it back and not by the bolt, the connecting rod doesn’t come out and the pistol will not fire.

These pistols were also cut with a slot in the grip frame for a shoulder stock, which often served double duty as a wooden holster. The Broomhandle holster certainly did. Like the sights, the shoulder stocks were impractical, but most countries wanted them — at least in the beginning. The M712 actually uses its shoulder stock to help control the gun from climbing in recoil in the full-auto mode, so there’s a practical use for it. Of course, these pistols are made from diecast metal, and attaching a shoulder stock would soon wear out the slot. Even the steel firearms are always loose at this location. 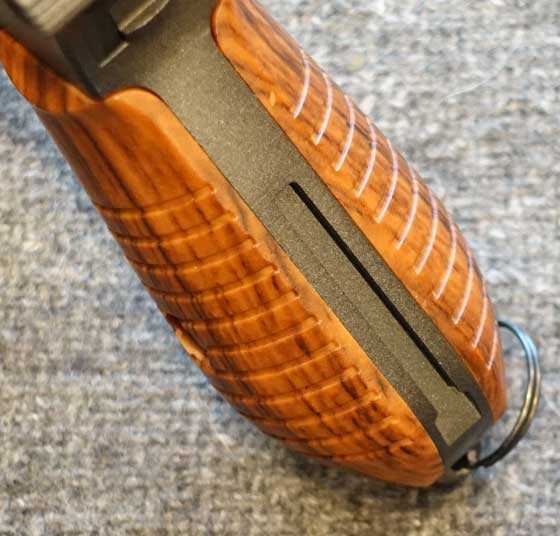 The slot at the base of the grip frame is for a detachable stock that’s also a wooden holster. Because this pistol is made from soft metal, a stock isn’t practical.

When it came to sidearms, Mauser always played second fiddle to the firm of Lugwig Loewe, which later became much better-known as Deutsche Waffen und Munitionsfrabriken, or DWM — the Luger people. DWM got all the military contracts, but that left Mauser to sweep up a lot of commercial sales, plus sales to countries that weren’t first in line for the Lugers. After war broke out in 1914, everyone was scrambling for firearms to arm the troops, and Broomhandles did sell to the military, along with the P08s that were in short supply.

This is a CO2 pistol whose cartridge and 18 BBs fit in the removable magazine located in front of the triggerguard. Pressing a release button on the right side of the frame allows the magazine to drop free. 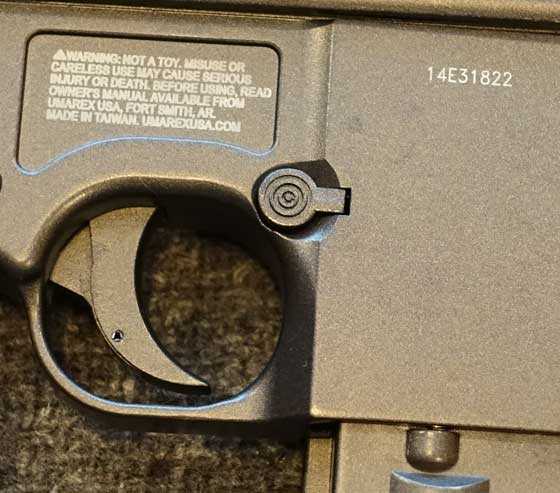 The magazine release is a button on the right side of the frame, ahead of the triggerguard. Pressing in allows the magazine to drop fee from the pistol. 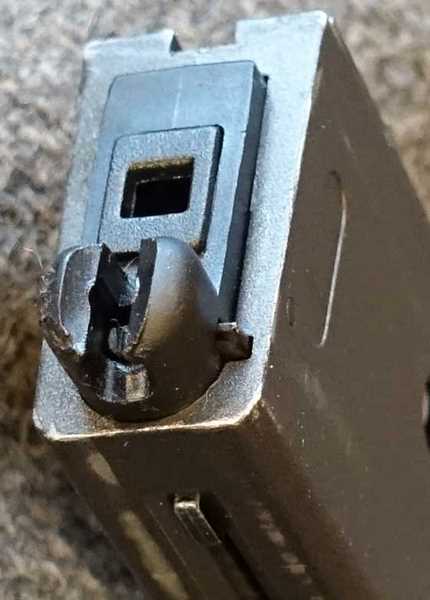 Load BBs through the front of the magazine — not through the square hole on top! As each BB is pressed in, it forces the BB before it to drop down.

Disassembly — don’t do it!
Yes, you can disassemble this pistol. And yes, there are small parts that can fall out, so I don’t recommend it. There’s no practical reason to do it, and I am not showing a video of how it’s done. Many who try it will not be able to assemble their guns again. There’s a small part that wants to drop free and with it comes a tiny hairspring that actuates it. These are loose parts that are held together only by their confinement inside the lower frame. Once out of the frame, they’re free to fall away.

The Mauser firearm design was made like a Chinese puzzle, with no screws holding the parts together. They interconnect in intricate ways, and the disassembly tab at the top rear of the grip is flipped up to separate the upper receiver and barrel from the lower receiver. Once the upper receiver and barrel are out of the lower receiver of this airgun, though, there are many tiny screws, springs and parts that are not found on the firearm. This is a gun to stay out of!

Power-wise, the M712 is supposed to spit them out at 360 f.p.s. That’s fast for a BB gun, but not overly so. And the gun needs some gas to operate the blowback function. Of course, I will test the velocity for you, but I watched the video Paul Capelo made and he got pretty close to those results, with some slowdown from the cooling of the gun as it fires.

What I want to see next
Umarex, you’ve awakened a sleeping dragon with these realistic air pistols. Here’s my wish list. How about a SIG P210 pistol? I can’t afford the firearm, so give me the next best thing. And don’t forget the M40 Lahti pistol made by Husqvarna, which was the mainstay of Denmark, Sweden and Finland for so many decades. And for gosh sakes, do I even need to say it again? Give us a realistic Single Action Army revolver! So many people have asked for that one over the years. I know the 12-gram CO2 cartridge doesn’t fit inside the standard SAA grip, but I’m pretty sure it will fit inside the grip frame of the 1860 Army frame that’s about a half-inch longer than the SAA grip.

Umarex got its start with blank guns — selling them in countries where firearms were not legal. They’ve now taken the next step with realistic guns that also shoot projectiles. I doubt there’s any end in sight!

Pyramyd Air Cup
In 2 weeks, I’ll be in Ohio to participate in the first annual Pyramyd Air Cup. If you plan to go but haven’t registered or reserved a room, then it’s time to get on the stick and do it! In fact, the last day to sign up is this Sunday, October 12.

Those who attend will experience 3 great days of shooting, trying out guns at the sight-in range, competitions, good food and lots of camaraderie. Meet other airgunners (some from this blog!), Pyramyd Air staff, airgun hunter and writer Jim Chapman, Airgun Reporter Paul Capello and me. All the info is on the special Pyramyd Air Cup website.

Airguns excluded from new legislation in California
Even if you don’t live in California, you’re probably aware of the numerous attempts by state representatives to pass legislation that requires all airsoft, BB and pellet guns to be brightly colored and to enforce greater restrictions on the purchase of these guns.

A 2014 effort had gained significant steam that looked like it might pass. However, due to the efforts of Pyramyd Air, Crosman, Remington and Umarex, California Senate Bill 199 excludes BB and pellet guns from being brightly colored. The bill was recently signed into law by the Governor and doesn’t require airsoft guns to be brightly colored but it does require them to have fluorescent strips on certain parts of the gun. The law takes effect Jan. 1, 2016. Click here to read additional details in the official Pyramyd Air press release.