Okay, let’s look at this air rifle. Over to you, Tyler. 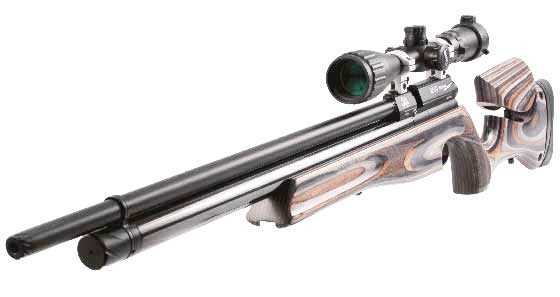 Air Arms has long been at the front of the pack when it comes to sporting air rifles. The year 2014 was no different for the iconic manufacturer. Celebrating their 30th anniversary, Air Arms rolled out several new models that caught the attention of airgunners the world over. The S410/510 series has been some of my personal favorites for quite some time. They represent a value for your money — for which you often have to pay at least a few hundred dollars more. Multi-shot, externally adjustable power, a great trigger and a highly accurate Lothar Walther barrel are all benchmarks of the line. The Ultimate Sporter represents a step forward for Air Arms. With the help of Minelli in Italy, they’ve kept the classic S510 style stock but made a few upgrades that both the obsessive field target shooter (yours truly) and any hunter can enjoy. Let’s now take a closer look at some of the features of the Ultimate Sporter.

The main difference most will notice on the Ultimate Sporter is the gorgeous laminated stock. With the introduction of the new Air Arms FTP 900 in the same year, Air Arms and Minelli presented a unique laminate color scheme that has not been seen on the production market before. Not only do the new colors add a bit of flare, but the addition of an adjustable cheekpiece marks the biggest upgrade that we’ve seen thus far over a standard S410/510. 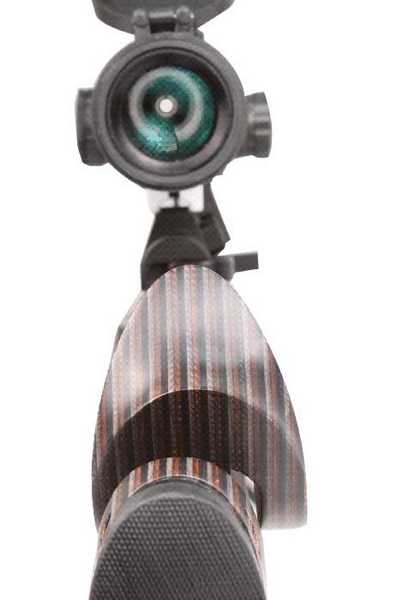 The cheekpiece adjusts in several directions.

This is a feature many might overlook; but if you’ve never used a rifle with an adjustable cheekpiece, you really don’t know what you’re missing. When properly set up, it ensures a comfortable and consistent cheek weld that’s automatic and vertically and horizontally adjustable. You can also move it forward and backward and put some angle on it with the ball joint design. 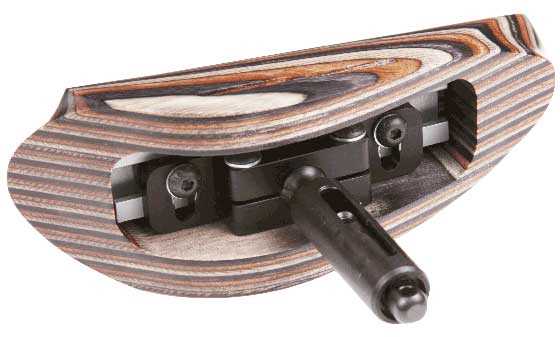 The cheekpiece moves on an adjustable ball joint. 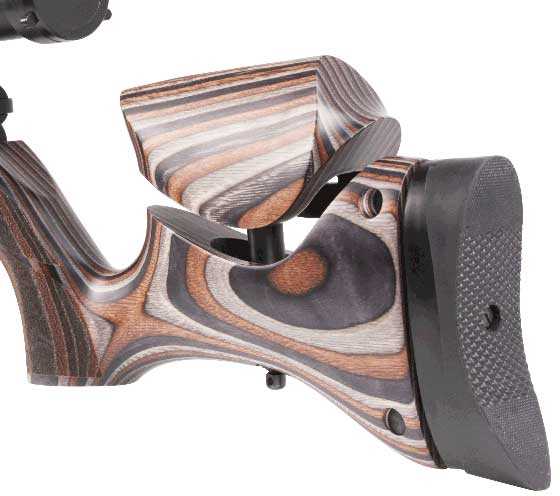 The buttpad also adjusts, making the rifle easy to adapt to most shooters’ physiques.

Moving forward to the forearm, there’s a flat-bottom design unique to the Ultimate Sporter stock. It contains an accessory rail, the same as you’d find on a 10-meter target rifle or field target rig. Commonly referred to as an Anschütz or Euro rail, the gun comes standard with a swivel stud installed on the rail, which can be moved and even removed entirely. This matches the stud in the bottom of the cheekpiece rod and makes the rifle ready to accept a sling out of the box. For this review, I mounted an Air Arms bipod I found floating around.

I use a bipod on my FTP 900 and love the quick fold-out design. Sadly, this item is not imported at this time, but I wish it was! A UTG bipod could also be mounted to the swivel stud, as UTG provides a neat adapter for that exact purpose. This rail was previously found only on the field target lines from Air Arms, and I believe this was included in the Ultimate Sporter for the Hunter Field Target (HFT) shooters in the UK. With the introduction of the HFT 500 in late 2014, Air Arms made it very clear that this is the market for which the stock was built, as both rifles share the same stock. 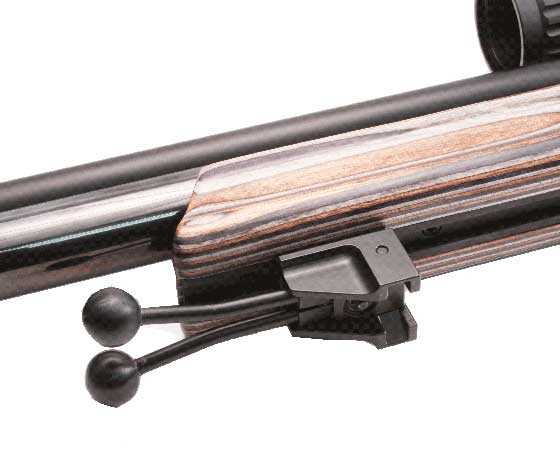 The Air Arms bipod I attached to the rail isn’t currently sold separately by Pyramyd Air.

The Ultimate Sporter stock has a semi-gloss finish. When I first opened the box, I was taken aback by it because I was expecting the same high-gloss finish as the FTP 900. I’m not knocking the finish on the Ultimate Sporter; it’s just something that needs to be noted. The stippled sections of the stock feature the same rough feel that I experienced on the BSA Scorpion SE.  It looks like this is what Minelli is going with now, and I like it a lot. It provides a very responsive feel and great contrast to the smooth portions of this gorgeous laminated stock. 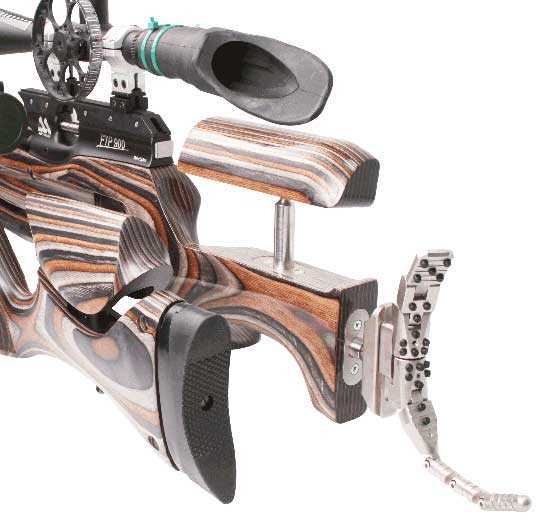 The beauty of a gun like the S510 is that you have an adjustable power wheel, which is an adjustment screw that lets you control the size of the transfer port. This makes chrony testing harder, as I had to play with different settings and record results. 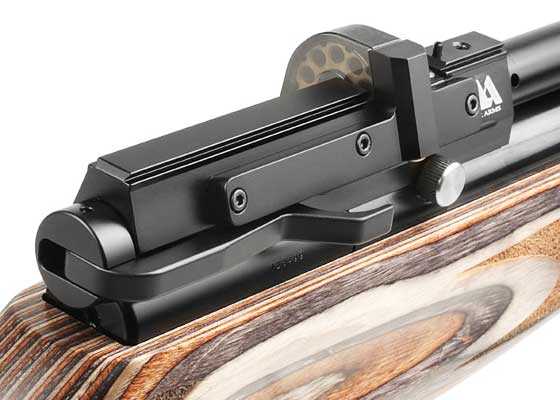 The short sidelever is pulled out and back to retract the bolt. The silver knob is the right side of the power adjuster that’s controlled on the left side of the action.

To get constants for high and lower power, I used H&N Field Target Trophy pellets in the .22-caliber rifle I’m testing. At 14.66 grains, it gives me a good idea of how close to manufacturer specs the gun actually performs. With the power adjuster set to the lowest setting, I aired the gun up to 200 BAR and loaded up some FTT pellets. Over 53 shots, I got a high velocity of 658 f.p.s. and a low of 640 f.p.s. An 18 f.p.s. variation over that many shots for this unregulated gun is pretty phenomenal if you ask me. The 14.66-grain FTT pellets were pushing 13.70 foot-pounds of energy at the average velocity of 648 f.p.s. As velocity started to drop off, I checked the gauge and saw the gun was down to about 135 bar. I was seeing spreads of about 2 f.p.s. between shots, so I knew that as long as the barrel was a good one, this gun was going to be a shooter!

I refilled the gun and turned the adjuster all the way to the other end of the power spectrum to see how hot this baby could go! This time, I really got a clear sweet spot. I found that a 200-bar fill is too much pressure at this setting, as we find with most unregulated PCPs. This should be particularly good news to hand-pumpers and folks who only have 3000 psi scuba tanks. Not quite as many pumps and more useful fills from your tank is never a bad thing, unless you’re a glutton for punishment!  From a 200-bar fill, the first 15 shots were really useless. They started around 900 f.p.s., and it took the first 15 shots to get up to 960 f.p.s. before we got into the sweet spot. Those looking for the very best accuracy will find only inconvenient points of impact shifts over the course of those 15 shots. Once we passed shot 15, though, the numbers began to impress me.

If we look at the entire shot string on the 200-bar fill, the low was 902 f.p.s. on the first shot. I stopped shooting once the velocity dropped below 930 fps, which happened at shot 40. Bear in mind that this is with the power adjuster set at the highest point. What it means is that the transfer port is fully open. So, this larger spread and lower shot count is to be expected. That’s all the adjuster is — a simple transfer port restrictor. With the transfer port all the way open, the 14.66-grain FTT pellet produced an average 30.30 foot-pounds over 40 shots. For a medium-weight, .22-caliber pellet like the FTT, that’s quite high. With a heavier pellet, such as the JSB 18.1 grain Exact Jumbo Heavy, you can expect to be in the 35-38 foot-pound range.

Adjusting the gun for real-world operation

Now came the task of finding out where the gun was most efficient for what I consider real-world numbers. This means using a heavier pellet and scaling back on the adjuster to get a tighter velocity spread. This also produces a smoother shot cycle. Before you tilt your head and give me that questioning look, let me explain.

When talking about a shot cycle, most people go straight to spring/gas-ram guns that have a lot of felt recoil. In a PCP, I’m talking about lock time as well as felt recoil. As you go up in power on a PCP rifle, you do begin to feel what I characterize as muzzle flip. This is a pulse created partially by the hammer (which in most hunting power PCPs is relatively heavy) hitting the valve, as well as the expulsion of air from the muzzle. Particularly with shrouded PCPs, you tend to feel this a bit more, as the air that gets caught by the baffles is propelled backwards into the dead space of the shroud. With the power adjuster on high, the shot cycle was ugly and harsh — I can’t describe it any other way. It’s not like the gun wasn’t accurate, but it took far more effort from me to achieve the groups I expected of a gun of this quality.

When shooting a PCP, I need the gun to do the work for me. Why? Well, I’m lazy and accustomed to 12 foot-pound field target guns that don’t move when you break the trigger. So, in my testing, I settled on the power adjuster set about three-fourths of the way toward the high end. 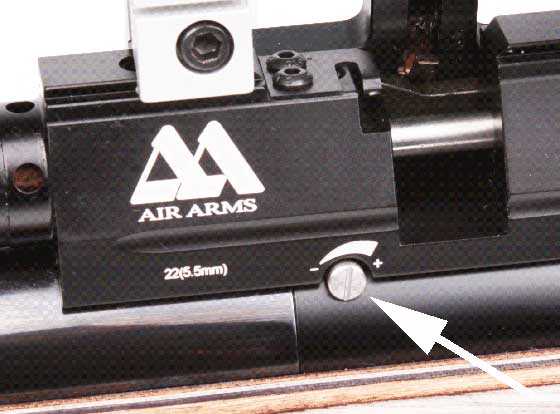 The power adjuster (arrow) controls the size of the air transfer port. It’s located on the left side of the receiver.

The JSB heavies produced roughly 28 foot-pounds at the muzzle. This is a pellet/speed combo with which I’ve had success in other guns, but I’ve only seen numbers this good out of regulated PCPs. Over the entire 30-shot string, the standard deviation was just 1.23 f.p.s., with an extreme spread of 18 f.p.s. This setup was yielding regulated results without the regulator! At this point, I wasn’t about to mess with the power adjuster further, as I don’t think those results could be bettered. The only thing left to do was shoot the S510 Ultimate Sporter for accuracy! I will do that for you in part 2. 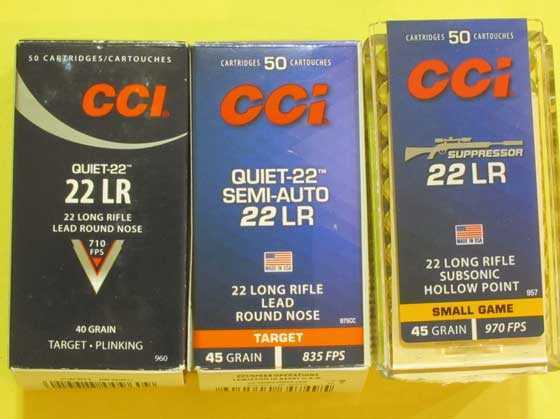