Today’s report is the first part of a guest blog from 4 authors: Ray Apelles, Hector Medina, Paul Plauche and Greg Sauve. They are all members of Field Target Team USA.

Over to you, gentlemen.

When JSB introduced their Exact Premium pellets at the 2015 SHOT Show, Field Target Team USA, through Hector’s connections, immediately agreed to conduct a test. It would be valuable to the team and to the airgunning community to have a solid body of results conducted by serious sportsmen. And, in essence, it’s a way for Team USA to give a little back to the community that so generously supports them. The test, therefore, had to be comprised of both PCP and spring-piston shooters. What better shooters than to use the four best-placed shooters in the World’s roster (a ranking of field target shooters).

Hector weighed 100 pellets from a randomized lot using an accurate, affordable digital scale with the distribution of weights shown below. It was interesting to see that the extreme spread of the pellet weights was within 0.1 grains. 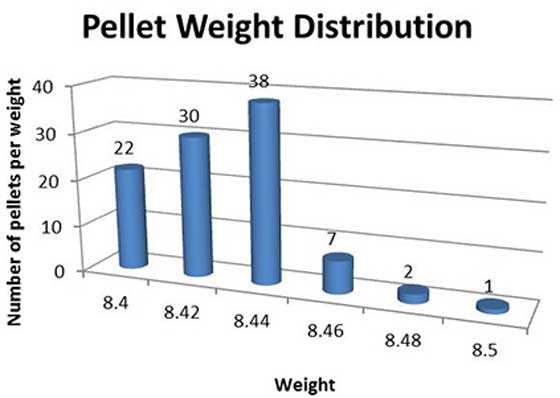 The JSB Premium pellets were consistent.

Some benchrest shooters use an air gauge to measure head size. Here, we need to express our thanks to Stephen Grayner and Dan Brown for their invaluable help in these tests. Both are seasoned airgunners. Without their help, the results would have been less enlightening.

Let’s start by describing what this particular air gauge does. It takes a controlled air flow and conducts it into a cavity formed by a caliber-specific sub-die that’s closed by the insertion of a pellet’s head into the cavity. The sub-die is caliber-specific, and the air gauge measures the pressure that remains in the cavity. If the pellet’s head is small, then the doughnut-shaped bleed port (the space between the pellet’s head and the sub-die cross section) is large. If the doughnut-shaped hole is small, then the pellet head approaches the sub-die dimension.

Air-gauging is an ideal tool for comparing things. It’s not so easy to use air-gauging as an absolute measuring tool. The flow of air depends not only on the differences of areas but also on the shape of the head inserted into the sub-die. So, we want to be up front and tell you that in no way were we expecting to measure the head size absolutely. Instead, we’re comparing how uniform the head sizes were within a box of pellets. After passing a randomly selected lot of 50 pellets through the head air gauge, we got these results: 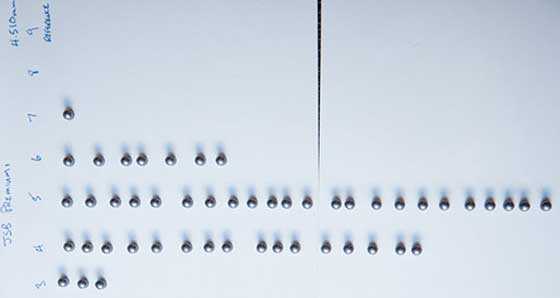 Exactly what are we looking at? Well, the small numbers on the left are pressure readings, and the arrangement of pellets is self-explanatory. For a given head shape, a 4.51mm pellet head might read 9 PSI, and a 4.50mm pellet head might read 5 PSI. If we change the head shape, those numbers will change. A big challenge with using air gauges is to get a master that very closely resembles the pellet your rifle likes to use. The difference between a Premier type of head and Baracuda type of head can rather dramatically move the scale. It’s important to note that a difference of 0.01mm (almost four ten-thousandths of an inch) reads between 5 and 9 PSI.

The differences seen in the above picture are not linear. But still, 92 percent of the pellets are in the 4 to 6 PSI region, which is half the variance between 4.50mm and 4.51mm. So, they are closely matched.

This particular air gauge works by measuring cross sections. Picture this in your mind — a pellet with some indentation or slightly out of round may still have the same area as a pellet with a smaller head.

Air-gauging, by itself, will not give you the whole picture. You need to apply other forms of sorting such as rolling, weighing and visual inspections — if you want to be TRULY competitive in benchrest.

This experience also showed us where future work might lead, as the old way of making pellets with two die halves coming together to swage a lead blank has probably reached its end. Future work will need to explore other methods of manufacturing if we’re to take the next quantum leap. But more on that and on the economics, as well as the consequences for JSB of starting this improvement process later.

Up to this point, we know these pellets are very well packed, very well controlled and very uniform. But how do they behave in the wind?

Not all of the shooters conducted ballistic tests, but we do have a few results that make the whole discussion very interesting. See the chart below.

As you can see, it’s more important which gun shot the pellets than which model/die made them. 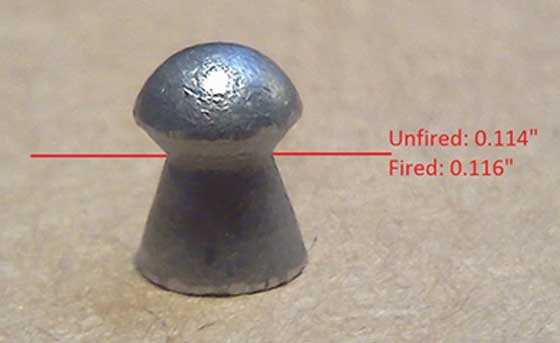 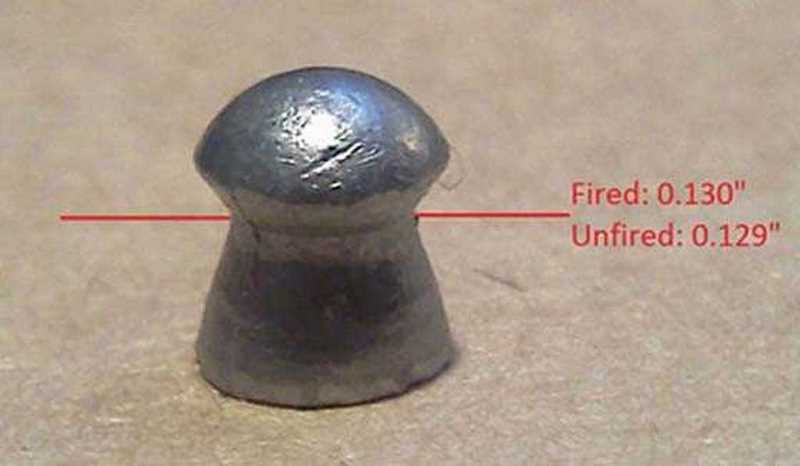 We’ll stop here, as the rest of the report is about accuracy. That should all be presented together, so watch for it in Part 2.

[Editor’s note: The reader should understand that the term “ballistic coefficient” is not a static value. It’s a statement of the efficiency of a given projectile when it moves within a range of velocities. Ballistic coefficients do not apply to guns — they apply to projectiles and change as the speed of the projectile changes.]