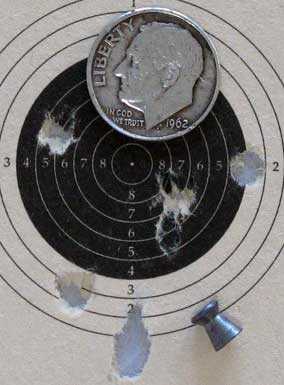 A couple weeks ago, several readers had a discussion on the blog about shooting the Colt Single Action Army BB revolver with pellets. I didn’t read everything they said in detail, but the basic idea stayed with me for several days until I began to wonder, “Why not?” Back in 2013, I tested the Diana model 25 smoothbore pellet gun and discovered that it’s very accurate out to 10 meters — even though there’s no rifling to spin the pellet. Why wouldn’t this BB revolver also be accurate?

Cartridges are the key

I guess what got people thinking about this is the fact that this BB revolver uses cartridges that are loaded one at a time into the cylinder. The steel BBs are pushed into the bases of the cartridges, and if pellets would also fit, then loading them into the gun would be easy.

We recently looked at the Gamo PR-776 pellet revolver, and we’re in the middle of our review of the Gletcher Nagant pellet revolver right now. People are thinking about airguns that use cartridges, like these guns do, and the Colt Single Action is very popular. But it’s a BB gun with a smoothbore. Could it also be accurate with pellets?

This thought kept pressing on me until I had to know the truth. So I got my single-action out of the box and installed a fresh CO2 cartridge. I loaded 6 cheap Chinese pellets into the bases of the cartridges, then I fired them into the pellet trap that’s permanently set up in my office. That exercise went well enough that I decided to give this a try. Nothing ventured, nothing gained.

Use the same cartridges

Before we continue, let me state for the record that these pellets are being loaded into the same cartridges that came with the Single Action Army revolver. There is nothing else to buy. The pellets are pushed into the base of each cartridge, just like BBs. And there they sit until fired from the gun.

I set up this test at 5 meters, because the Colt is a BB gun, and 5 meters is the distance at which BB guns compete. If a BB gun can hit a one-inch target at 5 meters it can hit a soda can at 10 meters with no problem.

I sat in a chair and used the UTG Monopod to steady my shooting hand. The first 6 pellets I tested were H&N Finale Match Pistol pellets. And the results weren’t that encouraging. Six pellets went into 1.232 inches at 5 meters. The best 6 BBs had made a 0.848-inch group, although that was actually with 4.4mm lead balls and not with steel BBs. The best steel BBs did was 0.926 inches. Both of them are better than the group made by the first pellet.

One thing I did notice, though, was that the shots were centered on the target. Given that the SAA sights are not adjustable, that’s a good thing! The pellets seemed to hit right at or just above the tip of the front sight, which is very convenient.

Next, I loaded 6 RWS R-10 Pistol Match pellets. They loaded into the cartridges easier than the Finale Match pellets. It seemed like they were made for these cartridges. Six pellets then went into 0.669 inches at 5 meters, and that’s when I knew the stories on the internet were true! 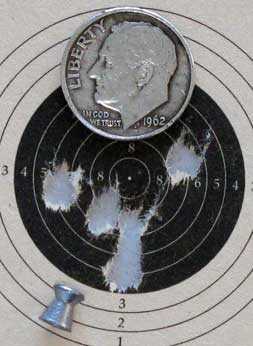 I’d planned to try a different pellet next, but this target convinced me to give the R10 pellet a second try. Maybe I found a pellet the revolver likes.

For some reason I jerked the gun on the second shot and pulled that shot higher than the rest. But I called it, so we know it was off. Five of the 6 pellets went into 0.848 inches, but that pulled shot opened the group to 1.358 inches. 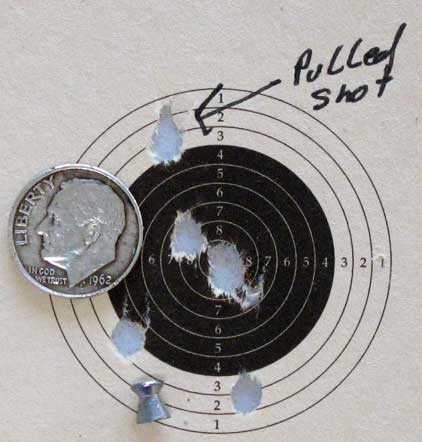 On the second try, 6 RWS R10 Pistol Match pellets went into 1.358 inches at 5 meters, but one shot was a pull that was called. Discounting that shot, 5 pellets went into 0.848 inches, which is still pretty good!

Instead of testing a different pellet at this point, I decided to back up to 25 feet and see what this R10 pellet could do. Since this was a test of what the SAA can do, rather than a complete report, I wanted to stick with what was working well.

This time, all the shots were good, and the 25-foot group measures 1.243 inches between centers. That’s close enough to one and a quarter inches that I will call it that. I was able to shoot a 6-shot group with the SAA that’s as tight as a 10-shot group from an S&W 586 revolver, which has a rifled barrel. While I won’t say that the Single Action Army is as accurate as the 586, nobody ever said it was supposed to be. This is just close enough to warrant attention. I think this is fantastic performance from a revolver we didn’t even know would shoot pellets. 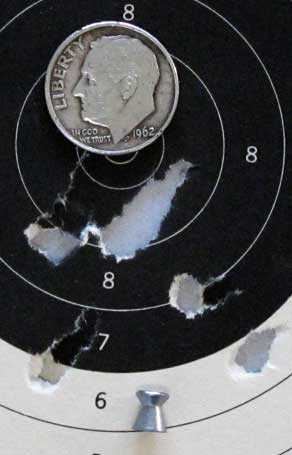 Today was an unexpected bonus from the Colt Single Action Army BB revolver. You can use it in a way never envisioned by its maker. There’s nothing more to buy, and nothing special you have to do — just load the gun and shoot it as you normally would. Only, instead of BBs, load lead pellets.

It isn’t common to discover hidden benefits with airguns as significant as this. Those who have purchased the SAA now have a whole new light in which to view their purchase.