Here’s a bad idea that refuses to go away — shooting pellets in firearms. This takes several forms. I will do a quick look at the most popular ones in this report.

One kit fits revolvers. It has an insert barrel that fits into the barrel. It’s fastened into a larger-caliber gun like a .357 Magnum by some sort of friction fit.

The one I owned was made for a Smith & Wesson 586/686 revolver with a 6-inch barrel. Yes, they are that specific. The pellets fit into cartridge-shaped modules that accept a primer at their other end. They are then loaded into the cylinder and are fired either single action (cocking the hammer first) or double action (just pulling the trigger). The kit I had came with primitive tools to extract and reload the primers after firing.

The benefits of such a system were touted as a cheaper way to practice with your service gun, safer and quieter operation, and the ability of shooting your firearms in your home. Let’s look at how my system performed.

My kit was in .22 caliber and of course the insert barrel was a liner for a .22 rimfire barrel. So the bore was way too large for the pellets. Read yesterday’s report to understand why. The primers launched the pellets at anywhere from 200 f.p.s to 475 f.p.s., depending on many variables like the friction fit of the pellet in the cartridge, how easily the pellets entered the barrel and the power of the primer, and even the type of primer that was used (regular or magnum).

After the pellet left the cartridge it jumped the gap between the cylinder and the breech and then you hoped it hit the rifled barrel insert dead-on, because if it didn’t it sheared off part of the head or part of the skirt or both. Accuracy was on the order of 4-6 inches for 5 shots at 10 feet. Yep — I said 10 feet! I tried shooting from farther back but then I sometimes missed the whole bullet trap!

The same concept is offered now and again for long guns. Sometimes this is a conversion kit that is installed in a firearm as a cartridge adaptor like the handguns. The firearm barrel is used in this case, because only correct caliber firearms are selected for this. I will explain in a moment. Other times the long gun is actually dedicated to the system and cannot be made to shoot firearms ammo again. I will look at both types. Adaptors are first.

This approach uses adaptor “cartridges” to shoot pellets in centerfire firearms. Someone gets the idea that the bore of a .223 Remington (or a .22/250. or a .222 Remington or a .220 Swift, etc.) barrel is .22 caliber, so wouldn’t a .22 pellet launched by a rifle primer be a good thing? No, it wouldn’t! Centerfire .22 bores are even larger than rimfire bores, with a diameter that’s running 0.224-inches. These guns don’t even suffer shooting rimfire cartridges in them very well, to say nothing of the much smaller .22 caliber airgun pellet.

But kitchen-table tinkerers get excited by such things and nothing can stop them from experimenting. I found one company is still making these conversion cartridges today. Their website is hosed-up and won’t allow me to order the .222 Remington adaptor I wanted, but I was able to order a conversion cartridge in .223 Remington caliber, so I will try it in my AR-15 that veteran readers know is very accurate. Sportsman’s Guide carries a limited number of conversion cartridges, and I ordered one.

I hope it works, but past experience tells me not to expect much. I also want to check things like the discharge sound level that they claim is like a breakbarrel spring rifle (yeah — right!). The unit uses a number 209 shotgun primer that is way more powerful than a conventional large rifle primer, so it should really give the pellet a boost! We shall see.

There have also been a number of long guns that were dedicated to the use of either primers or percussion caps to power pellets. The most recent one that I know about was the Prime Gun that came out not too long ago (early this century?). It started as a single shot firearm that was converted to shoot pellets. The problem was, once a gun is manufactured as a firearm in the U.S., it cannot lose that designation. So the gun they were converting was still a firearm. That caused a problem with the distribution (needs to go through federal firearm license holders), so thay drafted a letter to the BATF to get a waiver for their gun. But that wouldn’t have helped, because, by using the power of a primer, their gun was already a firearm! The definition of fireams includes words about “using the gasses generated by a chemical explosion”. That’s what primers do.

That brings me to my final observation. Primer-powered guns date back to almost the first use of the percussion cap. I know that there were guns powered just by percussion caps as far back as 1842, and the percussion cap itself only became generally popular around the year 1820, give or take a few years. It was invented more than a decade before then, but took time to evolve into something that was easily used by most people.

The early primer-powered guns were not actually Zimmerstutzens, which I will discuss in a moment, but they shared the primer-powered aspect of design with them, and there is no other good name that I can think of for this class of guns. They were parlor guns or perhaps small science experiments that a shooter could use for plinking. Bear in mind that the 1840s and ‘50s were the days before the invention of the .22 rimfire cartridge (1856), and also a full half-century before accurate airguns existed (1905), so these guns were accepted more for the fact that they worked at all rather than the fact that they were accurate.

The Zimmerstutzen is a highly refined version of a primer-powered gun that came into existence at the end of the 19th century. Zimmerstutzens are accurate small-caliber guns that were safe enough and quiet enough for use indoors, and they evolved into target rifles that were used in competition at 15 meters. Some writers say they were for Schuetzen shooters to come indoors during the winter, but if that is true they soon became a class of gun of their own. They still exist today and there are still matches for them in Germany.

That’s as far as I’m going to go with them, but if you want to know more about Zimmerstutzens, read this article that is very thorough. I will tell you that a Zimmerstutzen was on my bucket list from the time I was 13 until I finally got one, sometime in my late 40s. By then, however, I knew what a 10-meter air rifle could do and the Zimmerstutzen seemed antiquated and clumsy by comparison.

Yes, primer-powered guns do work, but they cannot compete with airguns. They are louder, nowhere near as accurate and far more expensive to shoot because of the cost of the primer or percussion cap. Add to that the fact that they are technically firearms and you have no reason to shoot them beyond sheer curiosity. I no longer own a Zimmerstutzen so I can’t test that for you, but I will test the adaptor that lets you shoot pellets in a firearm. Then we will all see together. 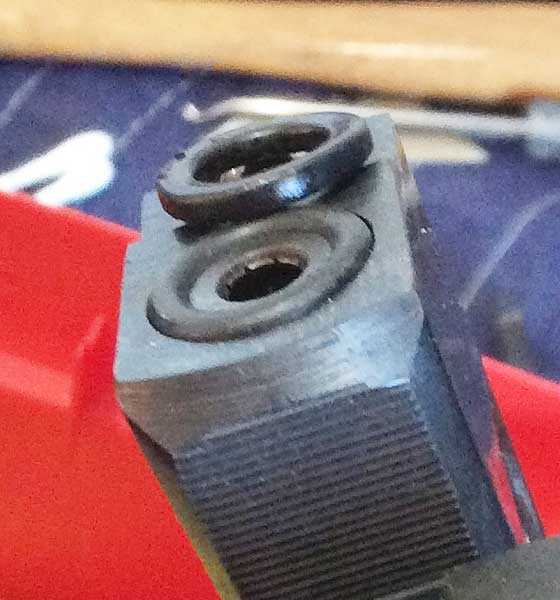