I was asked to write this report, and I’m glad to do it. I made the statement that I shot Colt Single Action revolvers at 300 yards and apparently some readers were intrigued. Actually, that wasn’t the whole story, so today you’re getting the rest of it.

I acquired the book Sixguns by Elmer Keith when I was a stunt gunfighter at Frontier Village amusement park in San Jose California in the late 1960s. I was young and impressionable at the time, so I didn’t know that Elmer Keith was widely held to be a liar. He reported taking several long-range handgun shots that got him game and the couch reporters of the day didn’t believe him. But I did, so I tried what he wrote and discovered that it does work. I guess I’m a liar, too! 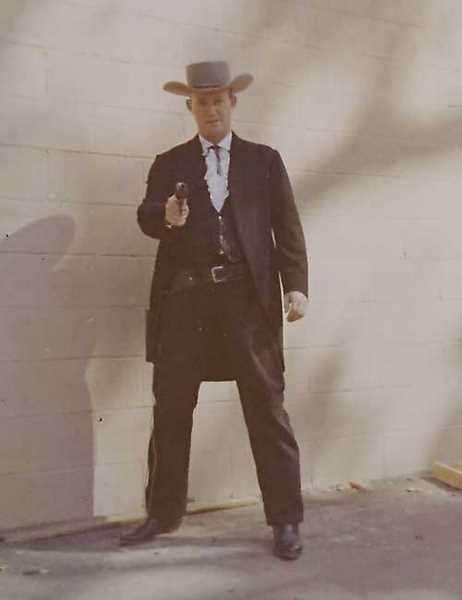 In this picture I was the deputy marshal (white hat) of Frontier Village. Gave the marshal a day off.

I shot beachball-sized rocks at 300 yards with a Colt 1860 Army cap and ball revolver. The holdover was tremendous, but once I got it figured out, it was hard to miss. And the lead balls made a nice splat on the rocks.

Please don’t ask me if I shot this way standing up and offhand! That’s the stuff of Hollywood! Nobody in the real world can connect from a shot that far away from the standing offhand position. I shot just like Keith taught me to — sitting down and resting my elbows against my knees. Or I shot one-handed with my hand resting against the outside of my extended leg. It is a variation of the Creedmore shooting position that I have showed you numerous times in the past. You have to try this stuff to see that it really works!

Yes, I have told you this before. I described it in the report titled How to rest any handgun for accurate shooting. 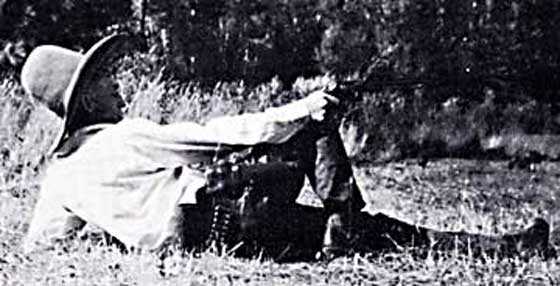 Here Keith is shooting with a one-hand hold. This is good for 300-yard shots. 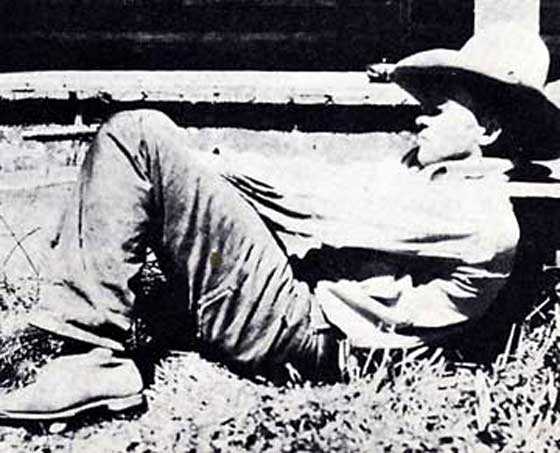 This is the two-hand hold. It is even better for long-range handgun shots. 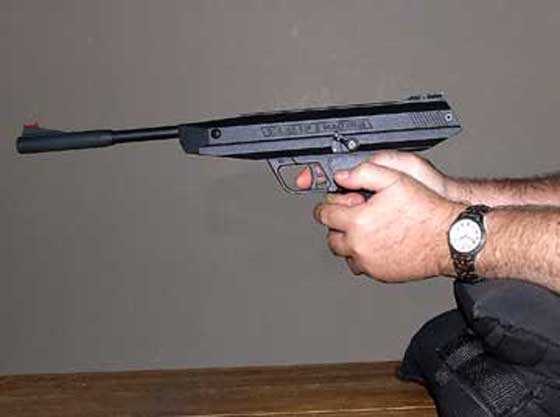 Here I am using a variation of the two-hand hold. My arms are resting on a sandbag.

Although I was a tanker, I have a lot of respect for field artillery. I was a 4.2-inch mortar platoon leader in Germany and had to learn some of the intricacies of indirect fire. It’s one thing to aim at your target, but something else to aim at a reference point, knowing that your projectile is going over a mile high and three miles downrange, to land within 40 meters of the target! 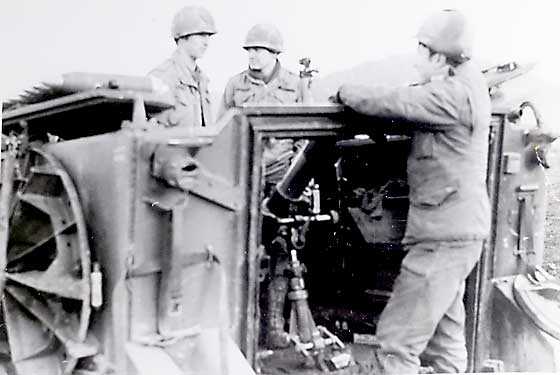 This is one of my 4 mortar tracks. Yes, when I was younger the world was in black and white!

My platoon had failed their annual test the previous year and were assigned to me — a senior first lieutenant — to bring them up to speed. We practiced our drills every day, until we could do them in our sleep. And, when we took the test (an ARTEP, for you soldiers), we were ranked top in the division, among several dozen other mortar platoons. During our live-fire test we actually landed one 4.2-inch mortar round down the turret of one of the target tanks, blowing the turret off the tank! That was nothing but luck, but they say if you shoot a lot you get lucky a lot.

The division commander (First Armored Division) saw that shot and wanted to give every member of my platoon an impact (on the spot) Army Commendation Medal, but my company commander declined his offer. The evening before, during practice, one of my gunners had read his sight backwards and we hung a 4.2-inch flare over a German village behind us and outside the Grafenwoehr training area! A 4.2-inch mortar flare is so bright that there is no way anyone can miss it! Which is my way of telling you we were good — just not perfect.

The last story I will recount is one I find hard to believe. But since I did it, I know it’s true. I was on a German farm with a hunting buddy and we had permission to shoot handguns over a certain plowed field. Among the guns we had, I had brought a Colt Agent snubnosed .38 Special. I had been telling my friend about Elmer Keith and long-range handgun shooting and he decided to call me on it. 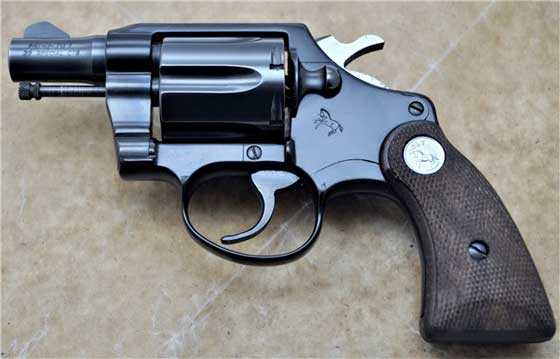 It is possible to shoot long-range even with a snubnosed revolver like this Colt Agent.

He said I should be able to hit anything with a snubnosed .38, just like any other handgun. After all, he reminded me, a mortar has a 4-foot barrel and can hit targets three miles away. It had been years since I had done any long-range shooting that way, but I rested against a tree and sighted the little pistol on a football-sized dirt clod out in the field. We were sitting on a ridge about 15 feet above the field, so I was shooting into the dirt safely enough. We agreed on which clod I would shoot at and I asked him to spot for me. Shot one was too low. Shot two went over, and so did shot three. But shots four and five hit the clod we agreed on and broke it apart.

My friend then had to try it himself and went through the same drill he had seen me do. He was also successful. After it was over he said he was surprised by how easy it had been. And that is the lesson today.

Long-range handgun shooting is not just possible; it’s easy! Once you learn where to hold, and if you hold like those photographs above show, you almost can’t miss.

I will say that pellets don’t make the same impact signs that heavy bullets do, so spotting will be harder, but if you can find a way to do it, you can shoot pellet guns long range, as well.