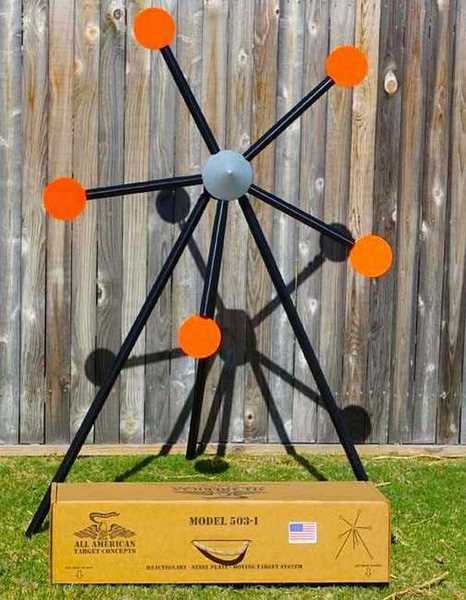 The All American Target Concepts 503-1 target is like nothing you have ever seen.

You may not remember me telling you about this action target in one of the reports on the 2017 Texas airgun show. Today I start my report about it.

The manufacturer does not call this a Texas Star, but they acknowledge that it works like one and most people will call it that. But if our sun is a star, this target is Betelgeuse! That’s a red supergiant start that, if it was in the same place as our sun, its rim would extend past the orbit of Mars! I’m saying the 503-1 is BIG. You might plink at regular Texas Stars at 35 yards — this is one you can move out to 75 and even 100 yards!

Besides being big, this target is tough. It will work with your 65-foot-pound AirForce Condors and 100 foot-pound Escapes, yet the same target will function with a puny Diana model 27. It will work with a .22 rimfire (long rifle) and handgun cartridges up to the power of .380 ACP. At the show I watched the inventor knock the paddles down with a child’s beanbag from 3 feet. When I tell you how it works you will understand how this is possible.

This target has been designed to deflect every bullet and pellet away from the shooter. All the angles are set to make that happen. The inventor also stressed safety when he showed me the operation.

The materials the target is made of are very rugged, yet also lightweight. It all fits into a rugged box that’s about 3/4 the size of a military foot-locker. The box has a rope carrying handle to make it extremely portable. That should appeal to clubs that have to set up their ranges on somebody’s property and knock them down after the event is over.

Open the box and remove the top foam layer and this is what you see. Each layer is precision cut to fit the parts that go in it exactly.

I can see one of these being used for a big bore airgun match at a future Texas airgun show. Yes, the maker says it will handle big bores that don’t exceed 500 foot-pounds at the muzzle and use lead bullets. It would just be positioned far enough away that the bullet’s energy would diminish to around 300 foot-pounds.

He sold me when he showed that it went together and comes apart without tools! And it goes together fast — about two minutes when you know what you’re doing. Actually let me refine that. I put it together the first time in under two minutes by referring to the instructions twice.

The 503-1 comes with two sets of paddles. They are the targets at the end of the arms. They are all the same diameter. The thin ones are for airguns and the thicker ones are for rimfires, handguns and big bores. It takes just seconds to make a chance, because each paddle is held on my a magnet. 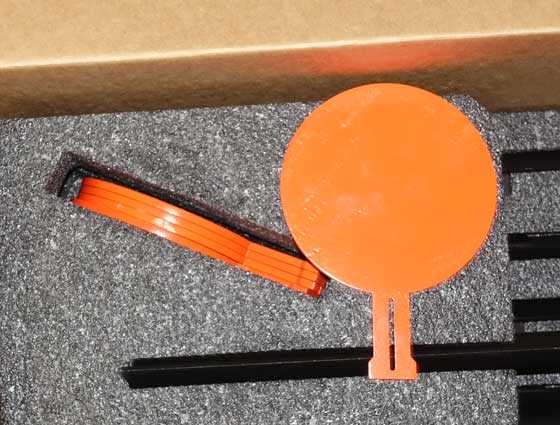 These five paddles are for the firearms and big bore airguns. 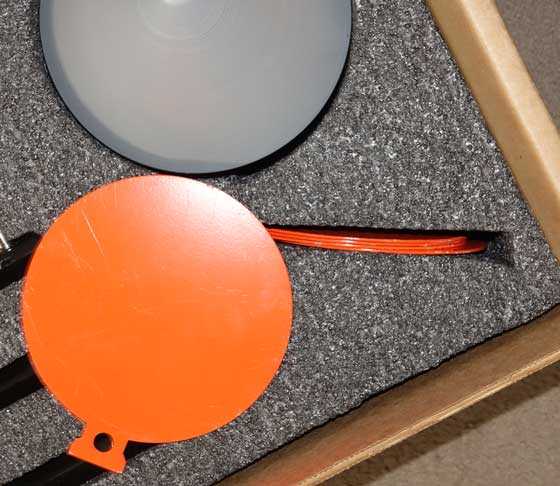 Magnets are the secret to how this target system works and why it works with such a broad spectrum of guns and power levels. The paddles are held in place by strong magnets, yet once moved slightly away they release freely. 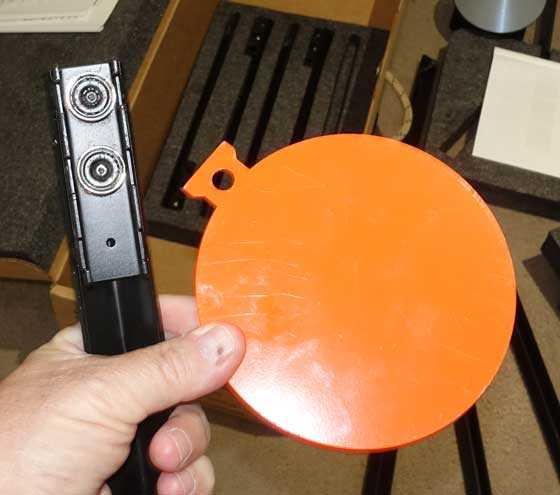 The paddle is held to the arm by one of those two magnets in the arm. 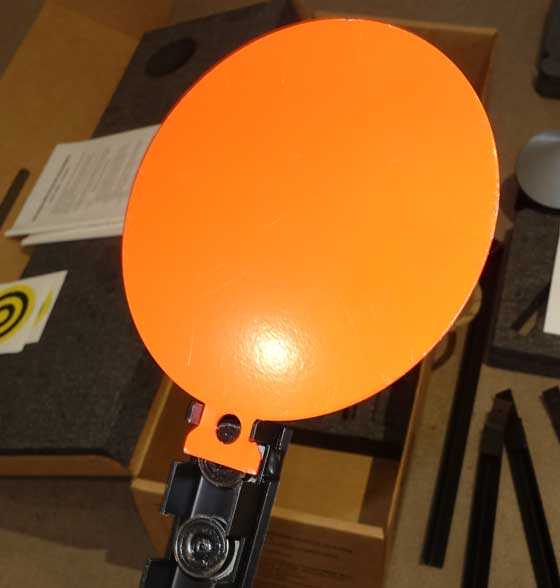 Once the paddle is on the arm the magnet holds it securely until a pellet or bullet moves it.

How large is it?

I took the target outside and set it up, which is how I know how fast it goes. Then I took a picture with me standing next to it for perspective. As you can see — this ain’t no little job! 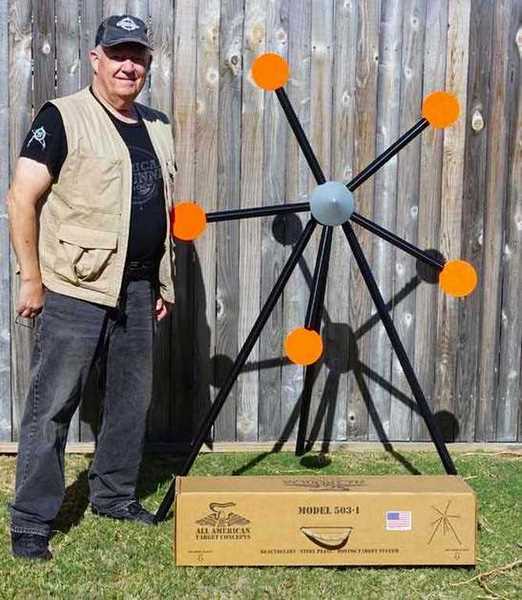 Yeah — it’s THAT big! This is a serious action target.

I broke it down and put it away almost as fast as setting it up — maybe three minutes, tops. Surprisingly, there were no parts left over! As a father who has assembled toys and bicycles on Christmas Eve, I was so glad there were no Tab As and Flange Bs. The guy who designed this target designed it for himself to put together, take apart and store easily.

Prior to writing this report I stared at that big box for weeks with trepidation. I knew I could get it out and assembled, but would I ever get it back inside? In fact that box with the layers of precision-cut foam are part of what makes this target so easy to assemble and to pack up again. I know the box cost thousands to design and I’m guessing each one costs $50. You would need to buy them by the thousand to drop by some amount, but not by that much (is my guess).

The inventor was wise to protect his design with many patents, so it isn’t likely that you’ll see this one being knocked off anytime soon. I say that so none of you get any bright ideas. Build one for yourself if you want, but forget production.

The cost hadn’t been determined the last time I checked. I will tell you when I find out. But it isn’t going to be cheap.

I haven’t told you about the bearing in the hub of this target yet. It allows the target to spin for minutes if it is balanced. Or, once one paddle falls, it begins swinging from imbalance. I will learn more when I start shooting it.

At any rate, I do plan on testing this one thoroughly.