Today I will tell you how to sharpen a straight razor. In the three months that I have been exploring this subject I have discovered that sharpening straight razors is a lot like learning about airguns. Of course the two have almost nothing in common, but what I’ve learned is there are many people talking about the subject without really knowing what they are talking about — or they have such poor communication skills that what they do know they cannot possibly pass to another person. That’s so like the field of airguns! There are people who can shoot extremely well, but for the life of them they can’t tell anyone else how to do it.

The bevel is the key

In airguns one important thing is how the gun is held. With straight razors it’s how well the bevel is set. I have spent three hours trying to sharpen one razor — all because I didn’t set the bevel right to begin with. I have done this on two separate occasions — each time wearing holes in my fingers from contact with the water stones for such a long period of time! The last time this happened, only two weeks ago, it finally dawned on me what I was doing wrong. I corrected myself and had that razor shaving sharp in 15 minutes. I wasn’t using a stone that was aggressive enough for the blade.

How to test for sharpness

I test every blade for sharpness, both before and after sharpening, by placing the edge against the pad of my thumb. This is a common practice in the community of people who sharpen razor blades. There is a “feel” to a blade that’s sharp enough to shave. The feeling is, if you were to slide the blade any distance, the thumb pad would be cut deeply. I would rate it as similar to a safe-cracker’s fingers working a combination lock or a gunpowder technician handling nitroglycerin. It is a learned feel and I won’t say more than that. Two weeks ago a friend showed me his knife that he said was razor sharp. I felt the blade this way and told him it wasn’t even close. 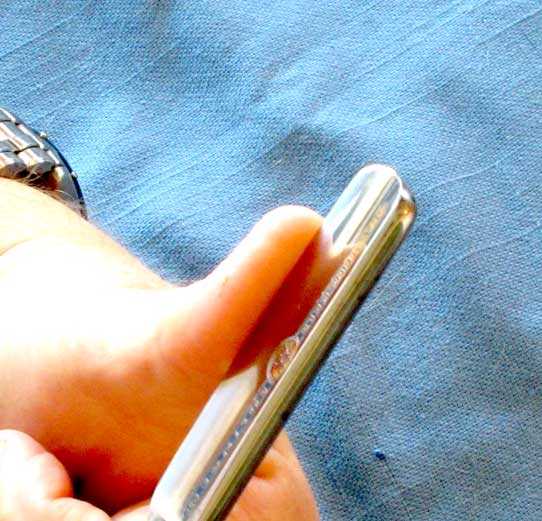 I’m pressing my thumb hard against a shave-ready blade. If I were to move the thumb one millimeter (0.04-inches) I would be cut deeply! Just by touching the blade this way I am able to evaluate the sharpness to incredible accuracy.

If I am starting with a blade that needs complete sharpening, or one that has some damage, like chips out of the edge, I begin setting the bevel with a 220-grit water stone. If the blade I’m sharpening already has an edge that’s just dull, I start with a 1,000-grit stone. And, if the blade is already somewhat sharp — which is far sharper than most knives ever get — I might start with a 4,000-grit stone. Whatever stone I start with, the object is the same. I want an even bevel along the entire edge of the blade on both sides that runs from the point to the heel. That’s the entire length of the blade.

How to move the blade against the stone

This can be done in a variety of different ways. The edge always leads the spine when you sharpen on a stone. You can push the blade away from you, or you can turn it around and pull it toward you. You can also move it in either direction while making small circles on the stone. You can even move the blade in an arc. Just be sure to sharpen each side with the same number of strokes. The object of setting the bevel is to get the edge of the blade to meet in the middle. That is what I was not doing when I spent three hours chasing the edge in the section above. 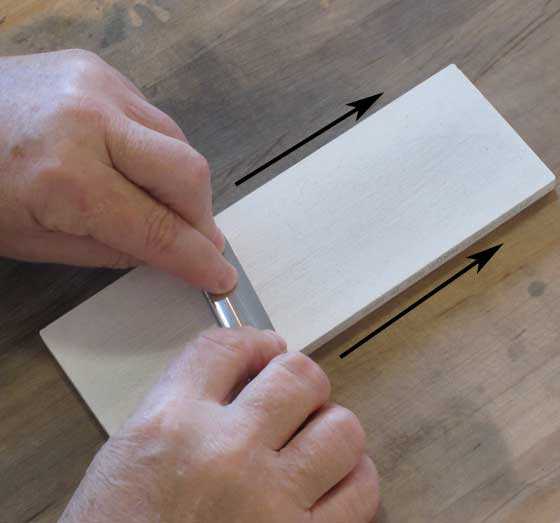 I push the blade, edge-first, away from me. The edge and spine both touch the water stone. My fingers are pressing on the heel and point, to get them to make contact with the stone for an even bevel.

After sharpening about 40 straight razor blades I can tell you that all of them sharpened in the center section of the edge on both sides first. The point and the heel on both sides had to get extra work on every blade I have sharpened. This is done with finger pressure on the part of the blade you want to contact the stone. You don’t need to worry about the center because, once it gets a bevel, it will remain. It might get wider in the center, but that is controlled by the thickness of tape on the spine. You build up tape in the middle of the spine, opposite the place where the bevel is getting wider.

A progression of stones

Once the bevel is set, the razor is run through a progression of stones, starting with the next-finer grit above the bevel-setting stone and moving through 4,000, 8,000, 12,500, and finally 20,000-grit. After that I strop on a cloth belt impregnated with chromium oxide paste that has 0.5-micron particles. No source agrees on how these particles equate to grit sizes. I have seen everything from 30,000-grit to 61,000-grit. Let’s just call it very fine.

As I move to each finer stone I use fewer strokes. Setting the bevel will take hundreds of strokes. The next-higher grit will take about 60 strokes per side and above that about 30 strokes/side. The final stone might get only 15 strokes a side. Also I will stop putting any pressure on the blade after 4,000 grit. This is a judgement thing. I don’t want to give any exact numbers, but as the stones get finer the strokes per stone get fewer and the pressure on the blade lightens up.

The razor starts getting shaving sharp with the 8,000-grit stone. It will shave at that point, but will pull some hairs, too. At 12,500 the hair-pulling stops. So why do I go to 20,000? Because someone recommended that I do. Does it make the blade any sharper? Undoubtedly. Is that extra sharpness worth it? Probably not. Will I still do it? Without a doubt. Got to make that pricy stone worth the expense.

Shaving is the best test

There are several ways of testing a razor. I talked about the thumb test already and there are several different tests involving the cutting of hairs. But the best test is shaving. That’s why we sharpen the razor in the first place. The thing about shaving is every man’s beard type and skin type is different. So the best test we have is also quite subjective. But shaving with straight razors for three months has taught me some fundamental things.

The first straight razor I ever shaved with entirely was one made by George Wostenholm, a Sheffield maker, in about 1840-50. It has a thick blade that cuts whiskers with almost no feel. At first I thought it wasn’t cutting, but when I felt my face I was surprised to feel the whiskers gone.

It was a reader who put me onto heavy Sheffield blades from the middle of the 19th century and they share similar characteristics. They all have thicker blades and many have the round points that I now realize are for comfort. I love these kind of blades so much that I designed a blade and commissioned a maker to make it for me. I could not afford the Sheffield blades that are one inch tall (that’s sixteen 16ths in razor talk), because they sell starting on ebay at $600 and go quickly up over one thousand dollars when they are in good condition. So, I had a knife-maker friend make me one, instead. I got what I wanted and it opened a whole new profitable business for him! When a local barber saw my blade he ordered two like it to give as gifts.

These heavy English blades are smooth and make it much harder to cut yourself. Think of this kind of razor as the training wheels of straight razors. They are the exact opposite of the modern deeply hollow ground blades.

In the process of making my razor, I also taught him how to sharpen razors, which he has to know if he’s going to start selling custom blades. I showed him how to tape the spine to protect it during sharpening, but then I got an idea. What if he made a guide out of kydex for the spine of each blade he makes? He makes knife sheaths out of the stuff, so he knows how to work it and he has plenty of it on hand. I have since sharpened five more of his blades — all with kydex guards, and they work perfectly. 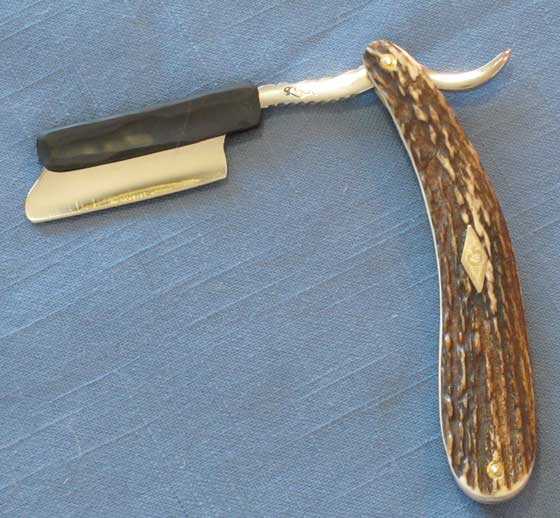 The kydex guide slips over the razor’s spine and aligns the same every time. Each blade must have a guard made custom for the best fit.

If it hadn’t been for all the writing I do about airguns, I never would have thought of the kydex blade guide. It’s the same sort of thing as buttoning pistons for smoother operation.

One of our readers put me onto “singing” blades. These are blades that are so thin that when you pluck them like a guitar string, they ring like tiny bells. When you strop one it sings on the strop, as well. Once I discovered what they were I found two among the blades I own. Here is why that is important. The singing blade gives the closest, smoothest, most controlled shave of any razor I have tried. But you don’t want to start out learning to shave with one! They will cut you quickly if you don’t know what you are doing. A singing blade is like a Diana 34P. If you know how to shoot it, it’s incredible. If you don’t, it can be horrible. You don’t give a pupil a Stradivarius and you don’t learn to shave with a singing blade. 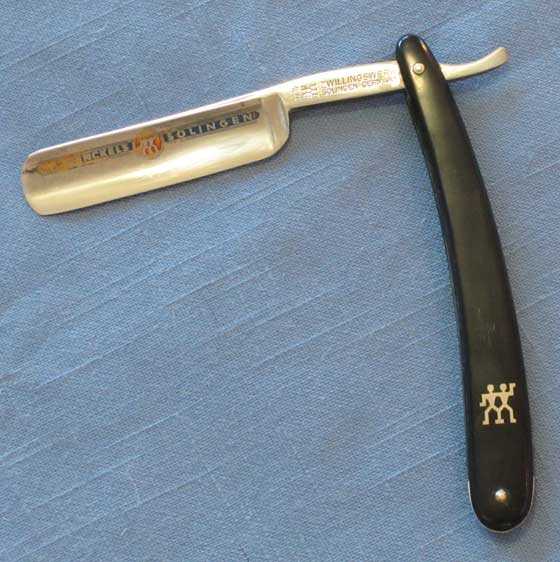 This JA Henckels is a singing razor.

I think that’s it for this series. As a reminder, I did this to remind myself of what it feels like to enter a new hobby. That worked very well and gave me loads of fresh ideas for this blog. What I didn’t expect was that I would also enjoy shaving with a straight razor as much as I do.

56 thoughts on “How to sharpen a straight razor: Part 6”