Many readers wanted to look inside the HW55 SF, and today is the day! This is a Weihrauch spring rifle, and it comes apart like most of them. There are a few differences that I will mention as we go. Let’s get started!

The first step after checking to make sure the rifle is not cocked and loaded is to remove the stock. On this rifle that means loosening three screws — one on the underside of the forearm and the two triggerguard screws. The screws can remain in the stock and triggerguard for safekeeping, but the triggerguard is removed from the stock. I’ll have something more to say about this during assembly. 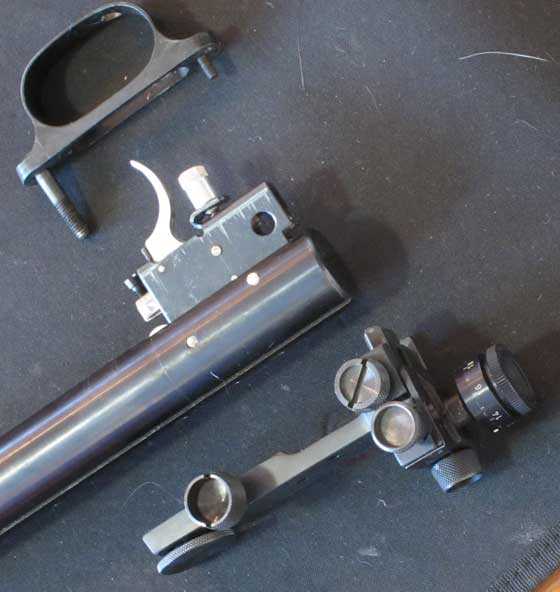 The sight comes off the action.

The next step is to remove the rear sight. That clears the dovetails for attaching the Air Venturi Rail Lock Spring Compressor. That has become a valuable tool for working on spring guns.

The next step is to remove the Rekord trigger. The HW55 has the special target Rekord that doesn’t have a safety, so when the trigger comes out there is no safety and spring to worry about. Just punch out the two pins left to right and the trigger is out. 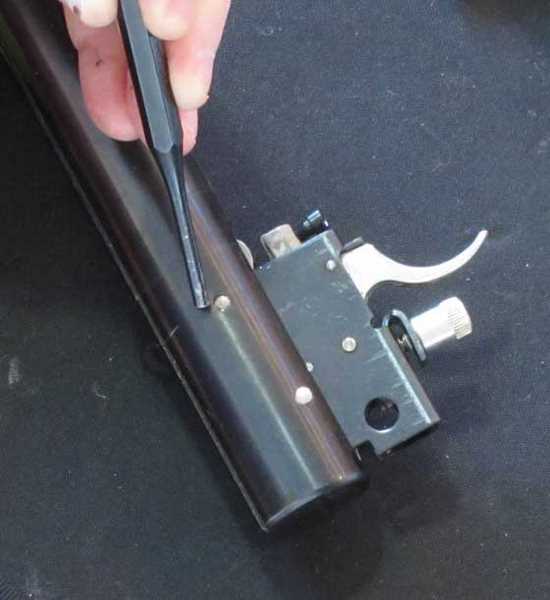 Drift out the two pins that hold the trigger. I remove the front pin first and I go from the left side — opposite what this picture shows. 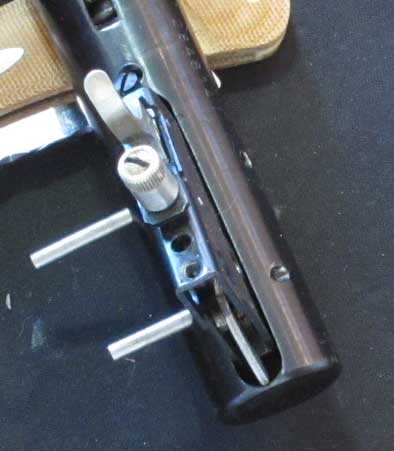 With the pins out the trigger can be lifted out of the action.

With the trigger out I can show you how this one differs from a standard Rekord. I’ll do it with pictures. 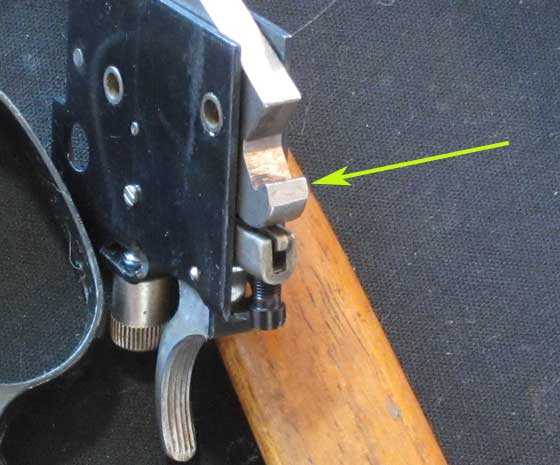 The front of the piston catch is ground and hand-filed at the factory (arrow) to refine the engagement with the piston rod. A sporting Rekord is rounded at this point, unless someone filed it afterwards. 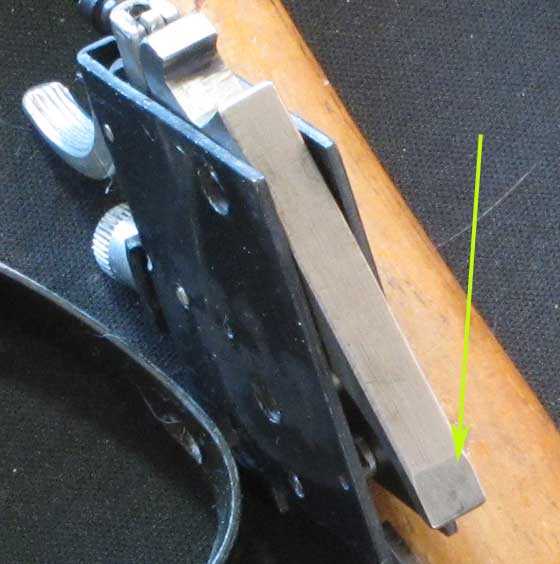 The rear of the piston catch that’s held by the sear (arrow) is also hand-filed at the factory. 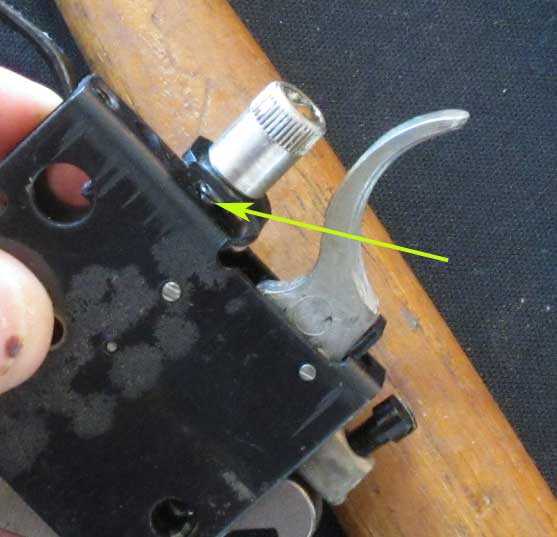 The trigger return spring (arrow) is much lighter than the spring on a sporting Rekord. Hand-fitting the trigger parts makes it possible for this light spring to work. 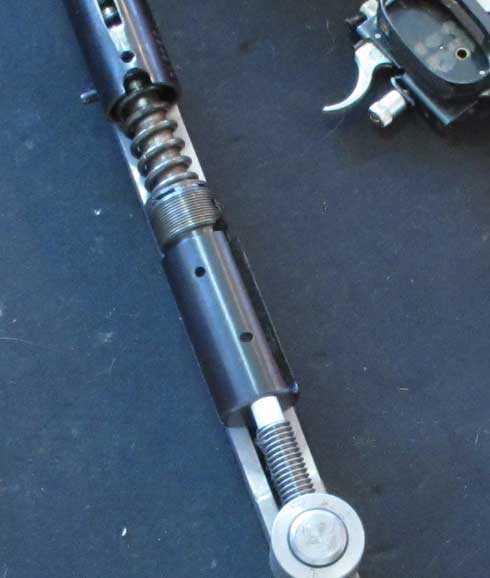 The mainspring has just relaxed. So, there is almost 3-inches of spring precompression (the spring outside the tube plus the length of the threads) when the rifle is together.

Now the end cap is removed, the compressor is taken off the spring tube and the mainspring and its guide come out of the tube. When they did I found a small amount of grease on the mainspring. It wasn’t moly and it wasn’t lithium. It was some sort of general purpose grease. That tells me whoever tuned this rifle last was probably knowledgeable and conservative. It might have been a dealer.

The mainspring is also straight, so it’s good to put back in the rifle. The guide fits close but somewhat loose. These parts are factory for sure. I cleaned all the grease off the mainspring and rolled it on a flat surface, looking for a wobble. No wobble. As I told you, it is straight. 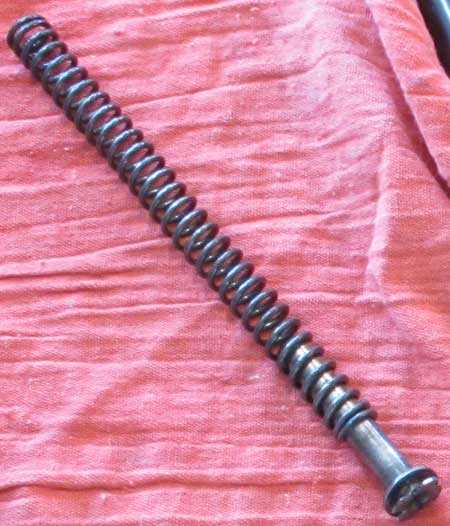 The mainspring is straight. The medium-viscosity grease is on thin.

To remove the piston the barrel must come off, so the cocking link can be removed from the piston. That’s done by removing the pivot bolt nut, followed by the pivot bolt. 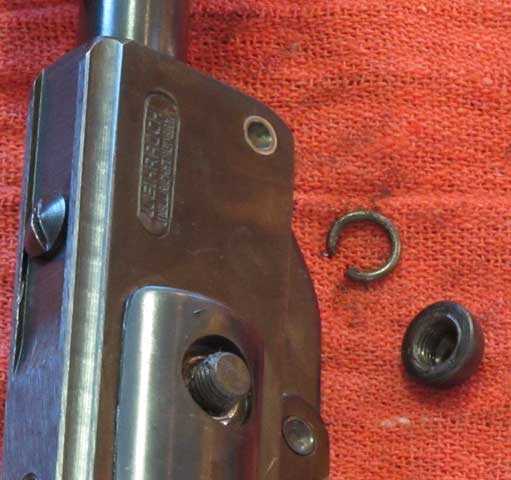 The pivot nut and washer come off the right side of the gun. The washer is a circular wire that is a replacement from later than the 1968-69 manufacturing date. This rifle has been apart since it left the factory. 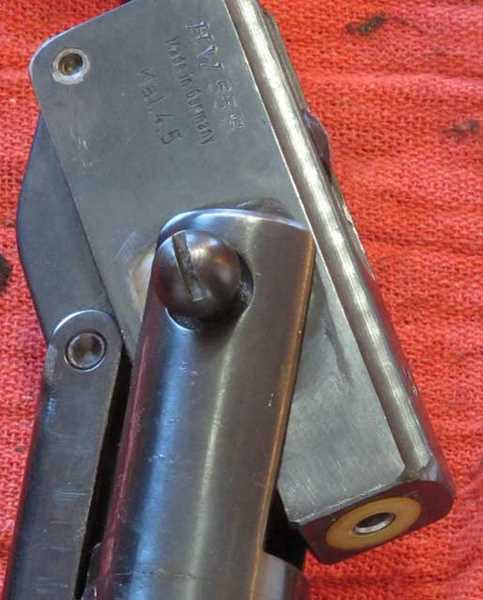 Now the pivot bolt is removed. The barrel can then be removed from the action forks. Once it’s free, the cocking link can be taken out of the piston. 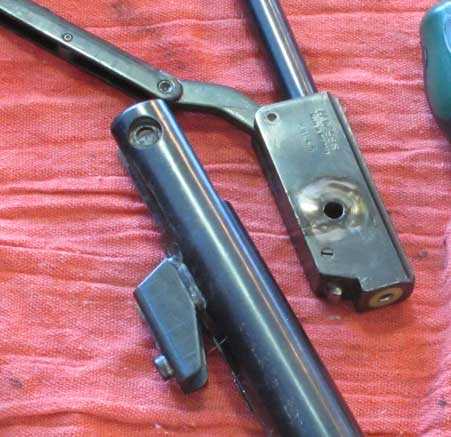 The barrel is separated from the action forks. 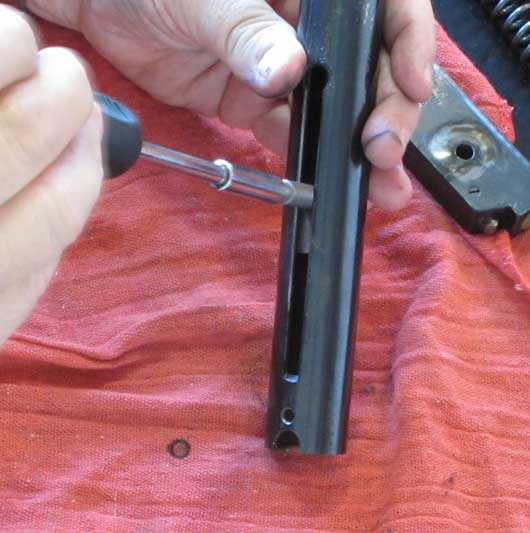 Remove the piston by sliding it out the back of the spring tube. 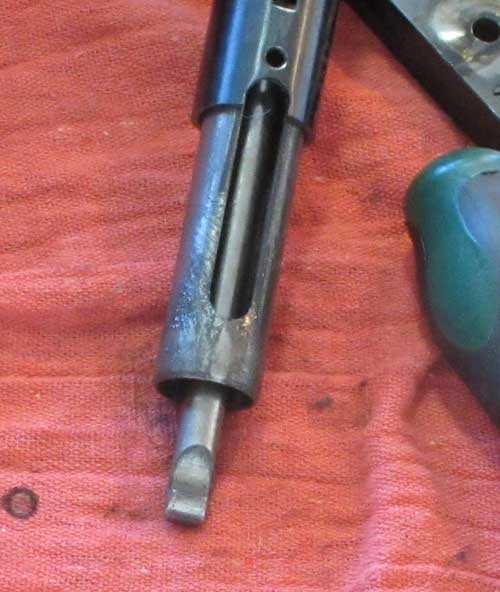 Only the swelled rear of the piston is greased.

About this time I felt an “extra” part in my hand. Because I have experience with Weihrauchs, I knew it was a piece of the leaf spring that keeps tension on the articulated cocking link, so it doesn’t rattel. The other part of the leaf spring was still held by the forearm screw boss that was still in place. Was this a problem? Wait and see. 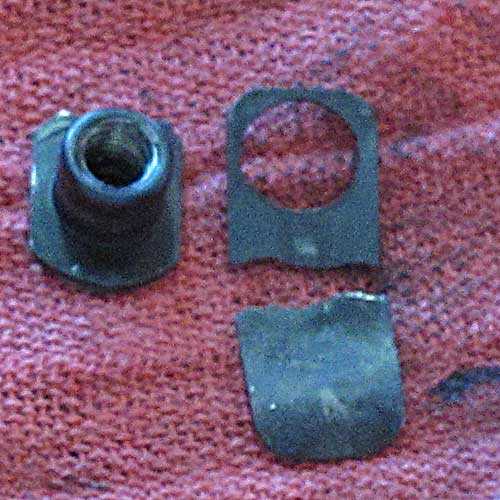 The forearm screw boss (left) and the broken leaf spring were removed.

It is possible that this seal is original, though I have rebuilt two other HW55s that were a couple years newer than this one and they both had leather seals. The piston had to be changed for the synthetic seal to work, so if this was done is was a deliberate act.

At first glance the piston seal appeared to be ruined. It had a lot of black gunk caked on top and in the parachute groove. But I was able to clean most of the gunk off and what I found was a seal that’s still pliable and ready for more use. Because of that, I will press on and complete the cleaning and overhaul today. I may order a replacement leaf spring, but I will put the rifle back together and use it without the spring. 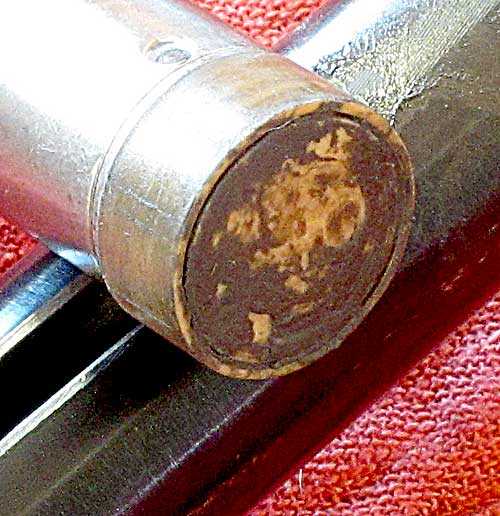 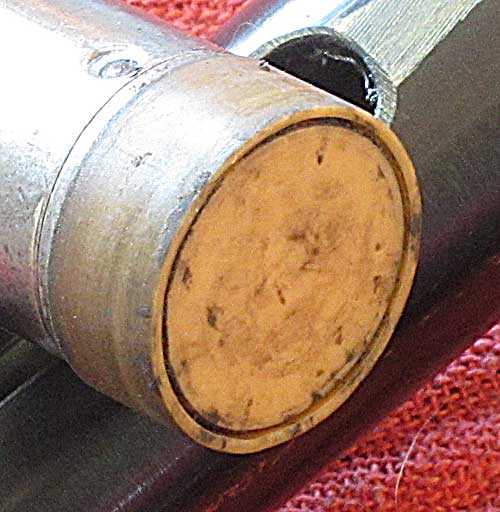 After cleaning the seal; is okay and still pliable.

At this point I inspected all the parts, including inside the spring tube. The cylinder is crosshatched well and surprisingly clean. All the parts were in good condition, except for that leaf spring, so the gun is good to go.

I lubed the piston seal with Air Venturi Moly Paste and slid it back into the gun. 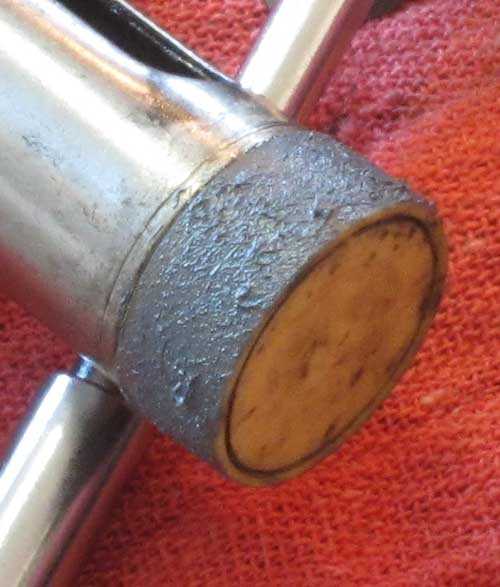 The seal was lubed with a thin coat of moly grease. 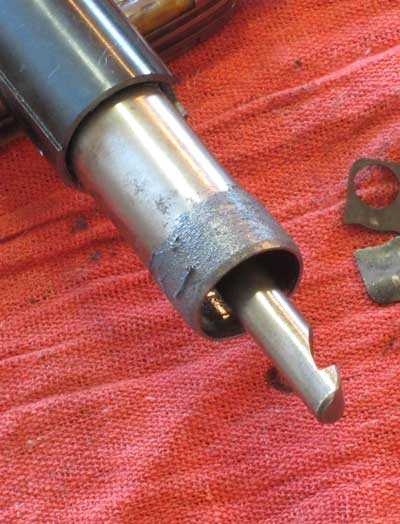 The back of the piston is swelled to guide it inside the tube (if it bumps the inside of the tube). That got some moly.

The gun then went together the reverse of coming apart. I don’t like it when people say that, but it’s true. I will discuss the few things you need to watch for, but first, I lubed the mainspring with a good coat of Tune in a Tube grease. 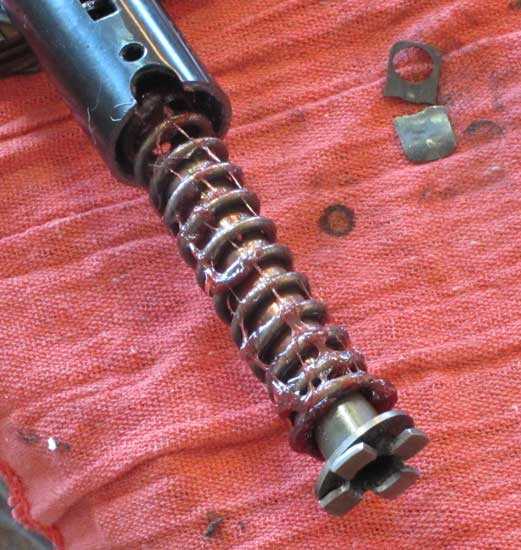 Mainspring lubed with Tune in a Tube.

I lubed the pivot bolt with moly before inserting it. When you tighten the pivot bolt, remember to get it tight enough to hold the barrel in position after the gun is cocked.

When installing a Rekord trigger it helps to cock it first. Do that by pressing down on the back of the piston latch until the sear grabs it. 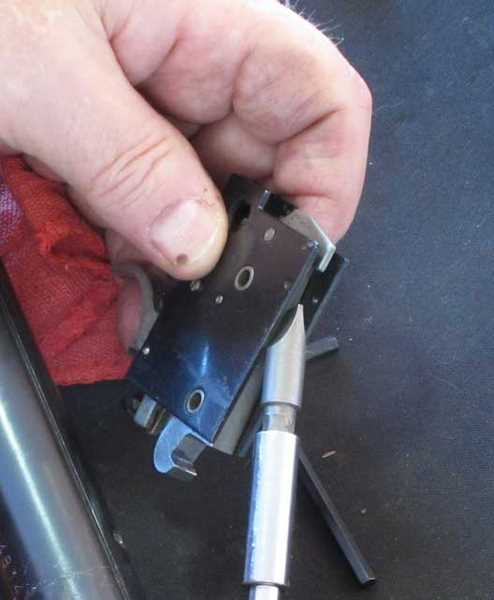 Press down on the back of the piston latch to cock the trigger before installation.

The gun went together smoothly. Just remember when you tighten the triggerguard screws that the rear (smaller) screw is going into a threaded piece of sheetmetal in the trigger body. Don’t tighten it too much! If you strip it a nut can be inserted to hold the screw, but it’s a chore.

After the rifle is together I pulled the trigger because it had been cocked to install. Then I cocked the rifle to load it. Cocking was smooth and this time there was no hesitation in the stroke. Remember that? There was a spike in the cocking effort toward the end of the barrel stroke.

Then I fired it with a pellet. Dead smooth! So smooth that I don’t think I will do anything else to this rifle except retest the velocity and accuracy for you.

It took me 90 minutes to do everything seen here, including taking a lot more pictures than you see. These older Weihrauch air rifles are so easy to work on!