First, here is a list of the airgun show dates that I know about.

Flag City Toys That Shoot airgun show April 14 THAT IS THIS COMING SATURDAY!

NRA Annual Meetings and Exhibits Dallas, TX, May 4-6. Open to the public. Free admission to all NRA members. Nominal fee if you are not a member.

I haven’t shot the Sub-1 crossbow in several weeks for a good reason — high winds! I’m done shooting at close range. I wanted to get it out where I could see if it holds up at distance. Well, last week I got a chance to do that, and I took it.

You must admit, a crossbow is not exactly what you expect to find in a blog about airguns. Neither are straight razors, so I do have a track record for going off the reservation, but this time the tie-in is strong. You see, the Sub-1 turns out to be the TX200 Mark III of the crossbow world! What I mean by that is this crossbow promises to deliver superb accuracy, and then it delivers!

I know when a TX200 comes out of the box it’s going to be spot-on. If the new owner has never experienced a TX it will be a wonderful experience for him or her — every time! That is what the SUB-1 has been for me. It has delivered on every promise made by Mission Archery (a division of Mathews Archery). That doesn’t happen very often.

I told you in Part 2 how concerned I was about shooing this crossbow for the first time. I had shot it at the SHOT Show, but that was under the watchful eyes of several people who knew what they were doing. Now I was on my own. There was nobody around to ask, when things got confusing.

Only things never did get confusing. I did what I remembered from the SHOT Show, augmented by the manual. The Sub-1 performed exactly like it was supposed to. That’s the TX200 experience I’m talking about.

Now that I know how the crossbow works, I am going to stretch out the range today. I want to see if B.B. Pelletier can really shoot a crossbow as far as they say.

I went to my buddy Otho’s house instead of the rifle range, because I wanted to control everything I did. At the range, if anyone else is shooting you have to abide by the range rules. You can’t shut the line down every five minutes to go downrange to retrieve arrows.

I knew from the first time out that I could hit the target at 20 yards, so that’s where I started. I set up the new DOA shooting bench (yes, a report on that is coming) and placed the arrow backstop/target 20 yards out. The arrow went to my exact aim point! Boring! Please — bore me some more.

I then moved the backstop out to 30 yards. I am checking the distance with a new laser rangefinder I bought for things just like this. From decades of shooting and the Army I can usually estimate ranges within one yard out to 50 yards and I had guesstimated the bag’s distance exactly.

Next I loaded and shot three arrows/bolts at the target. I was aiming at the 9-ball in the center of the target, and was surprised that my arrows landed as far apart as they did. The two on the outside are almost three inches apart! Oh, oh! What will happen when the distance increases? 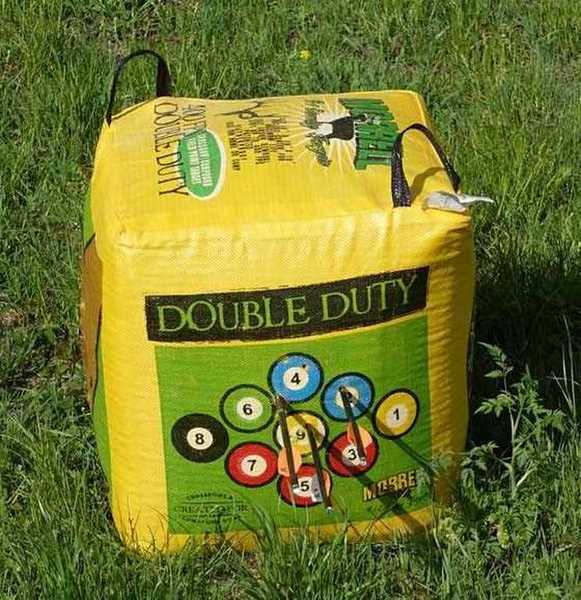 Three bolts at 30 yards when into this group. It’s nearly three inches across. I was aiming at the 9-ball.

Some of the initial fear crept back when I saw this target. Maybe I couldn’t do it. Maybe the Sub-1 wasn’t going to perform in my hands.

But maybe I wasn’t trying, either! Maybe I had forgotten to wear my glasses so I could see the crosshairs better!

While I was doing all of this I also did something dumb. When I attached the cocking rope for the second shot (the first shot at 30 yards) I forgot where the hooks are supposed to go and I attached them to the cables that are below the frame of the bow. It didn’t look right, and it certainly didn’t feel right, so I never attempted to cock the bow that way, but I did pull back on the handles and moved the cables a little — just to be certain it wasn’t right. That mistake was soon to bite me big time.

I was on at 30 yards, so I moved the arrow stop/target to what I thought was 40 yards. When I checked it with the rangefinder it was only 35 yards, so I had to move it a second time. This time I got 41 yards.

One thing that has concerned me all along is the trajectory of the arrow/bolt. It leaves the crossbow at 340-360 f.p.s. and it weighs about 418 grains. Add to that the arrow shape with the fletching and you have a heavy slow-moving missile with high drag. It’s not going to fly straight very long.

The “range” I was shooting on had me positioned higher than the target. At 20 yards I was 5 feet higher. And at 30 yards it was more like 15 feet. When you aim up or down like that the drop of the projectile isn’t as noticeable. I had been holding on the target with the center crosshair all this time. But when I went out to 40 yards my height above the target remained at 15 feet, and I knew the arrows were going to drop. The arrow stop is two feet square, so that’s all there is to play with. Miss it and you lose a $10 arrow.

The Hawke scope I’m using has a reticle to compensate for the drop. It also has a velocity ring on which you set to the velocity of your arrows. When it is set correctly the reticle should be on target or pretty close. 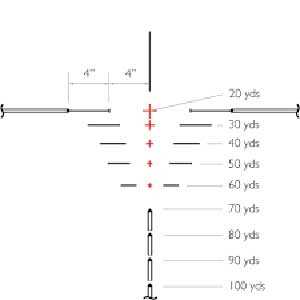 This is the reticle in the scope. 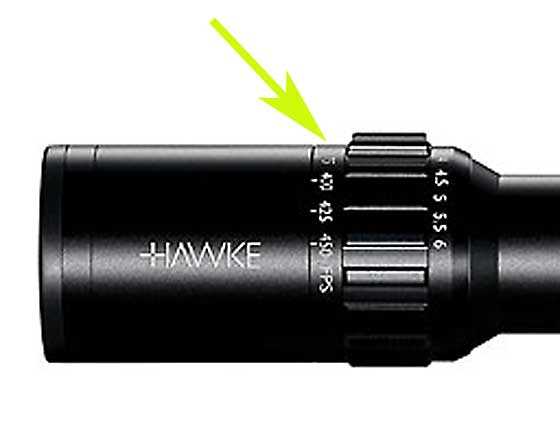 Set the velocity if the arrow on the ring and the reticle should be close.

None of this is magic; it’s just optics. And it works well, but it isn’t perfect. How far from perfect was what I wanted to test for myself. If I elevated the 40-yard aimpoint in the reticle and put it on the target I wanted to hit, would it work?

The first shot was with the main crosshair aimed at the top of the arrow stop/target. The arrow hit about 18 inches low. It was so low in the grass that I could not see it with the Moeopta binoculars. I had to walk down to the target to see in person.

When I walked back to cock and load the bow for the next shot, I saw fraying on the lower cable. I hadn’t noticed this before. Something was wrong.

Upon close examination I saw that one of the two cables that stretch between the limbs of the bow had popped out of a white nylon holder that’s there to keep the cables from rubbing against the bow frame. The cable that was fraying was now touching the frame. 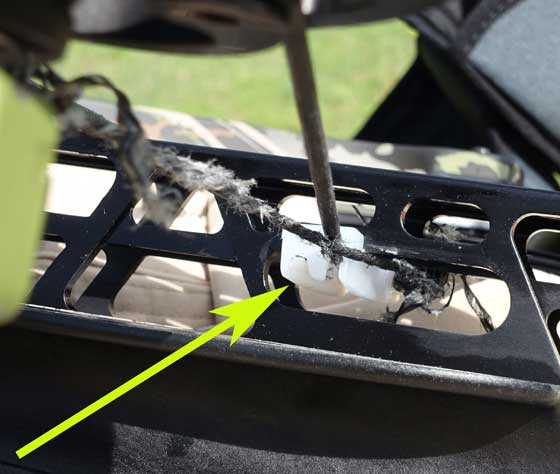 You can see the frayed cable. The arrow points to the groove in the white nylon bushing where this cable is supposed to be.

I didn’t know it at the time, but upon reflection I knew that when I attached the cocking rope to the lower cables I must have pulled this cable out of the nylon block. It started fraying immediately, but just became noticeable.

I still wanted to shoot at 40 yards and even farther. So, with trepidation, I cocked the bow and loaded an arrow. This time I held the 40-yard reticle aimpoint on the 4-ball at the top of the target. The arrow hit the top edge of the 4-ball, telling me that the reticle is right on! That is what I mean about the Sub-1 performing as advertised. What a delight it is when that happens!

I then moved the target to 50 yards that my rangefinder measured at 51 yards. I knew I didn’t have many shots left because that cable was fraying fast. But I wanted to see if at least this much worked.

I shot two times at 51 yards. Both shots were at the 4-ball at the top of the target because I was still concerned about the trajectory. I heard both arrows hit the target and didn’t bother to look through the binoculars. I walked down to the target instead. The two arrows had hit just above the 4-ball and landed about 1-1/2 to 1-3/4-inches apart. This crossbow can shoot! But the cable was still fraying fast and I felt it best to stop at this point. 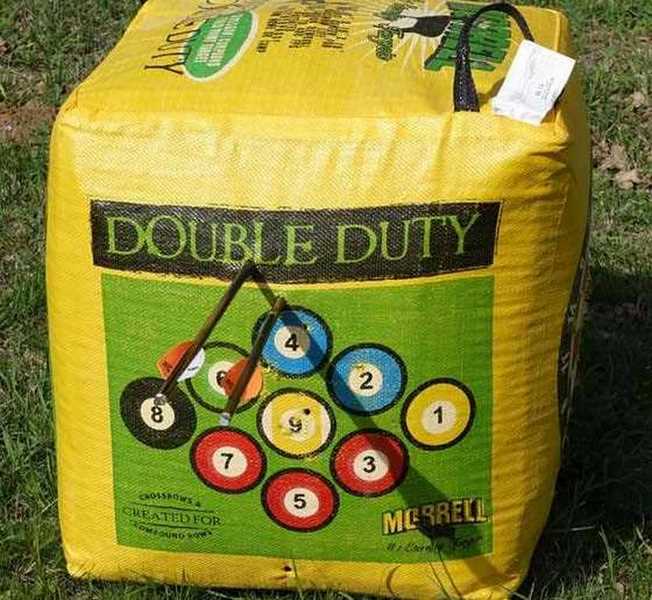 My final result at 51 yards. Two arrows less than 2 inches apart. The Sub-1 can shoot!

Here is why this is an important test. Mission Archery installed a premium scope on their premium crossbow and it performs just as good as the bow, itself. The bow continues to do everything expected of it.

I had made a mistake with the bow (attaching to the lower cables) and I caught it before it went too far. I informed Mission Archery of what had happened and they made arrangements THE SAME DAY to restring the bow at my local archery store for me! You readers are always shocked when you get this kind of service from Pyramyd Air. Now I know how you feel!

And yes, I am not done with this report. After the bow is restrung I plan to back up and see how far I can shoot it accurately. I have no doubt the bow can do it. 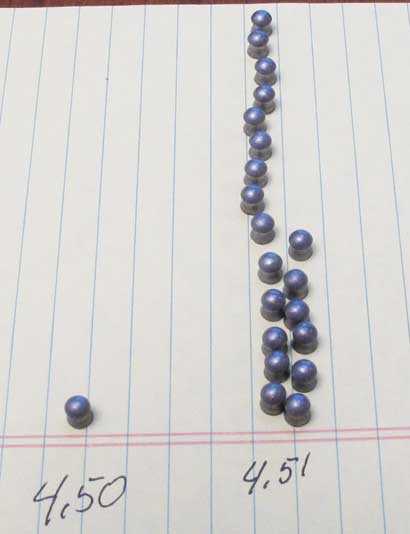