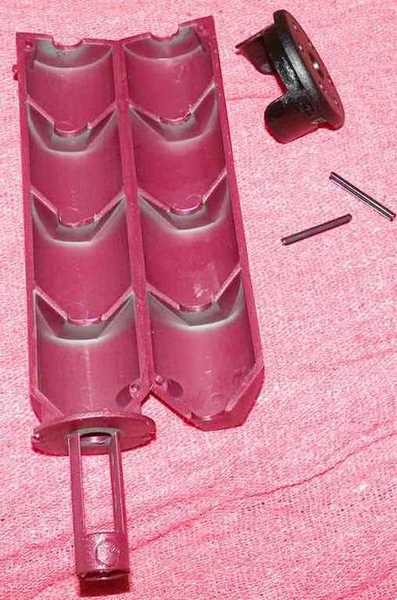 I will open todays’ report with an admission that reader Gunfun-1 was right about the Bug Buster scope on the Gauntlet. It worked well at 25 yards, but I tried to shoot the Gauntlet at 50 yards on Friday and the thick crosshair of the scope had me guessing by 1/4-inch where I was aiming. Also, the image at 50 yards wasn’t as clear as I would like. So — GF1 was right and I was wrong about the right scope for the Gauntlet. I will change scopes for the 50-yard test.

There is a lot of interest in the .22 caliber Gamo Urban I’m testing. I’m glad to see that the conversation remains civil and open to change as the test progresses. The Urban is a great new PCP and I want to give it every opportunity to perform at its best.

In case you haven’t read Parts 1 through 3 (especially Part 3), the Urban I’m testing had accuracy issues at 25 yards that I traced to the pellet nicking the last baffle in the silencer. Today we will look at that and also re-test the Urban at 25 yards.

We’ll start with the silencer. Knock out two pins and the end cap comes off, giving access to the baffles. The pins came out easily. They are roll pins, but all I had was a regular pin punch that worked fine. As one reader mentioned, the baffles are in two pieces, split down the middle. One side has a completely round bushing on its end that fits snugly into a tube around the barrel. This ensures the correct alignmemnt of the baffles.

The baffles inside the silencer are made in two parts. They are molded from plastic and take their final shape from the inside of the silencer can.

I will come back to the baffles in a bit. I had now removed any interference from the baffles, so I wanted to see how the Urban performed. I filled it to 3000 psi, which we learned is the start of the best part of the power curve, and went to 25 yards. The rifle was still sighted in from the last test, so I could start shooting immediately.

I started with JSB Exact Jumbo pellets. The first shot was extremely loud! I knew it would be, but I wasn’t prepared for how loud. If the group was tight I would complete the test with the other two pellets, but if not, I wasn’t going to listen to this longer than necessary.

To cut right to the chase, this group was horrible! I was shocked as I saw it grow though the scope. Clearly shooting without the baffles was not the answer to the accuracy issue! Ten pellets landed in a scattered group that measures 0.848-inches between centers. 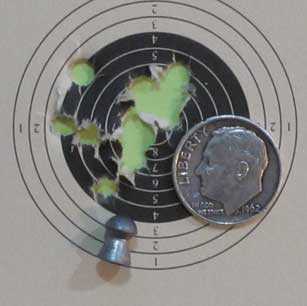 With the baffle removed the Urban put 10 JSB pellets into a scattered 0.848-inch group at 25 yards.

Well, I wasn’t going to listen to this noise any longer if this was the best the rifle could do. So I went back to study the baffle closer.

Upon close inspection I discovered that the baffles have flashing left over from the molding process. Yes the pellet nicked the edge of the last baffle, but only because some flashing stuck out into the pellet’s patch. I examined all the baffles and found that only the last baffle was a problem, and only one side at that! 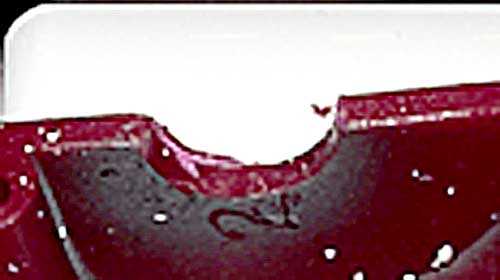 This is the view from the inside. I know it’s blurry, but you can see the flashing I’m talking about. 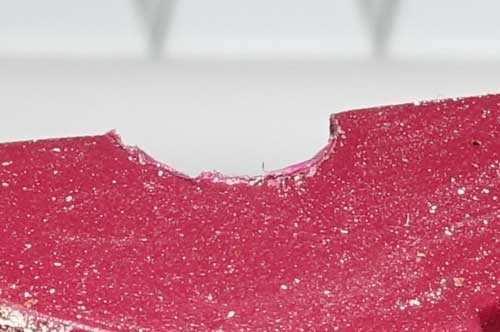 Here is a clearer picture taken from the outside. The flashing really stands out!

There is no need to drill out the baffle like I said last time. Flashing can be scraped away with a pen knife, which I did. Then I assembled the end cap on the silencer and was ready to continue the test.

Groups with baffle in

I took the rifle back to my benchrest and settled in for a second group. It was shot with the same JSB Exact Jumbo as the first group. And man — was it quieter! That silencer really does its job!

This time 10 shots grouped in 0.795-inches. That’s not a lot better than the first group, but look closer. Nine of those shots are in 0.385-inches and only shot number 4 opened the group all the way. The nine shots are also very round, which means the Urban is a consistent shooter. 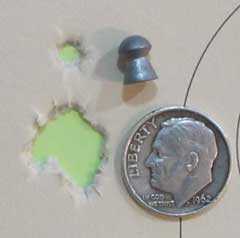 Point of impact moved 2-inches to the left

I was surprised to see the point of impact had moved a full 2 inches to the left, but I did hammer on those end cap pins to get them seated. I wanted to try another group, to see if the POI remained constant, and also would I get any fliers in the group this time?

I stayed with the JSB pellets for this last group, as well. Might as well pin this thing down securely and not leave any loose ends!

This time all 10 pellets went into 0.406-inches. There were no fliers, though one pellet on the left does stand apart from the rest. 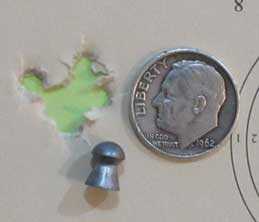 And here is the second group after cleaning out the baffle. Ten shots in 0.406-inches at 25 yards.

This group is exactly the same distance to the left of the aim point as the previous one, so there was no shift. I then adjusted the reticle on the scope to bring the shots back into the bull.

I do believe that the baffle touching the pellet caused the bad groups seen in Part 3 of this report. I also believe that the problem is solved. I’m kind of glad this problem cropped up, because it gave me a chance to show new shooters what can be done when they encounter problems like this, and also what can cause accuracy problems. Several readers suggesting just shooting the rifle would have solved the problem, and they are right. My way is faster, but no better than shooting the problem away.

I didn’t shoot the other two pellets today, but I don’t believe I need to. I solved the baffle issue, which was the best use of my time. I will shoot the other pellets at 50 yards, so we will get a chance to see how they do once more. Fifty yards is next.