Crosman’s 760 Pumpmaster is their equivalent of Daisy’s Red Ryder. Many years ago (2009?) Crosman told me production was over 20 million, and I can only imagine what it is today.

American Airgunner filmed the production of a 760 in 2009 for the start of the show in 2010. I watched a woman (in Crosman’s East Bloomfield factory — not China) assemble a gun in less than a minute. She sat at a bench that had flaps that were jigs for holding the gun during various parts of the assembly. She would install 4-5 parts then flip over a flap to hold the work and then assemble 8-10 more parts. Then another flap. It was a ballet of assembly! They told us this goes on for three shifts a day. It’s a shame that sequence never made it to the air.

The 760 Powermaster Classic I am looking at in this series isn’t the 760 many of us remember. Though not as old as the 1938 Red Ryder, Crosman’s 760 started production in 1966 and has continued in it numerous variations through the present day. To have every variation of just this single model would be a formidable collection. In December of 2005 I gave you a heads-up on a 760 that was produced in a quantity of just 1,500. It was called either the Commemorative or the 40th Anniversary — depending on the source you read.

Crosman 760 commemorative was only made in limited quantity one year.

I could go on but this report isn’t about the past. It’s about the new Crosman 760 Pumpmaster Classic that I saw at the 2019 SHOT Show. What’s unique about this airgun…

Okay — you guys have already spotted it, so go ahead.

Complain all you want — this is an incredible deal. I doubt Crosman makes much money on it, but it’s their flagship.

The 760 Pumpmaster Classic is a multi-pump pneumatic (3 to 10 pumps) with a solid steel smoothbore barrel (yep — it’s not a soda straw) that gets up to 700 f.p.s. with pellets and 625 f.p.s. with steel BBs. Why are BBs that are lighter slower? I’ll get into that in Part 2, but you guys can talk among yourselves until then.

The 760 has always been a short-stroke pumper, meaning the pump handle is about half as long as many other multi-pump handles. Even with that, the gun still pumps easily. I just pumped this one 10 times and noted that the effort became slightly harder after 4 pumps, but remained the same though 10 pumps.

You can leave a pump in the gun

Many modern multi-pumps are designed so they cannot be pumped until the bolt is cocked. Not so for this one. Pump it all you like and THEN cock it! That means you can store it with a pump of air inside and that stretches the life of the seals many times.

Can a kid pump it?

Yes and no. A 40-pound princess will probably have difficulty pumping this 760, but a 65-pound linebacker should be able to operate it fine. Crosman knows its target market and many of the kids who will get these have beards and are already drawing Social Security. I would say that cocking the bolt will be more of a challenge for kids than pumping the gun.

The trigger is a simple one, as expected. The lithographed box the gun comes in says the trigger pull is smooth, and I would agree with that. It’s too vague to talk about stages. Think of it as a long single stage trigger.

The front sight is a squared-off post on a ramp and no, it isn’t removable. The rear sight adjusts for elevation only via a stepped elevator. The sight picture is crisp and clear. These are sights BB can work with!

HOWEVER — it doesn’t end there. Crosman has put an 11mm scope rail on top of the plastic receiver to allow mounting optical sights. Yes, the rail is plastic, so this 760 Powermaster Classic cannot be used for bayonet drill — but neither can an M16. My plan is to mount the UTG Micro Reflex dot sight for a test. That’s right — a sight that costs more than twice what the gun costs. But you do the same. That 10 year old truck of yours cost you $27,000 new and by now you have put $31,000 worth of gas in it.

Yeah, BB, but it’s a smoothbore! You can’t shoot groups with it at 50 yards! I know. What was Crosman thinking? They make a youth-oriented multi-pump that retails for 35 bucks and you can’t even take it to the hundred-yard range. Sheesh!

I will do accuracy tests and you know I’ll be honest. But I do know a trick or two, so we could be in for a surprise! Just don’t get your expectations higher than they should be. Smoothbore airgun equals 10 meters at the most. BB guns are good for five. You wanna shoot tin cans at 40 yards — get a Beeman R7 or at least get a Synergis.

Like many inexpensive multi-pumps the 760 Classic shoots both BBs and pellets. As a pellet gun it is single shot, but as a BB gun it’s a thousand-shot repeater.

Load one pellet into the bolt trough after the bolt has been pulled back to cock the gun. Both sides of the trough are sloped to load the pellet easier and the trough is deep and without any hangups that turn pellets around. So loading this way is quick and easy.

BBs are first loaded into the thousand-shot reservoir through a hole in the bottom of the pistol grip. Slide the shiny plastic grip cap forward and reveal the hole. Then, to transfer some BBs to the internal magazine, slide the small button located at the top of the pistol grip back then hold the gun muzzle-down and twist it side-to-side. Actually, I found it best to hold the gun with the muzzle angled down and the top of the receiver upside-down, also. Then the BBs poured right into the magazine. 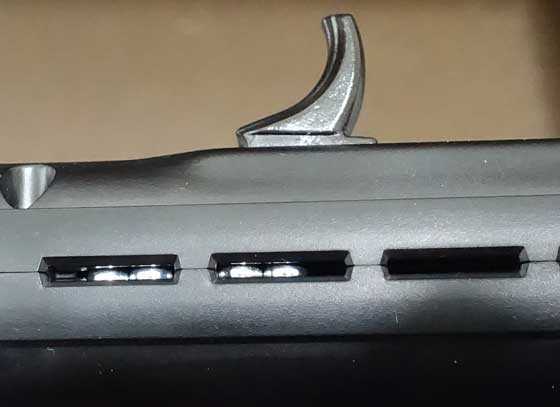 The BB magazine is on top of the receiver and you can see when it’s loaded with BBs.

There is also a trick to loading BBs into the barrel that I will share in Part 2. It’s an improvement that I don’t remember being in the older 760s.

So — whadda we got? The 760 Classic is a lightweight multi-pump pellet and BB gun that’s suitable for kids from 8 to 80. It’s affordable, powerful and hopefully accurate within reason. This will be a full test of a timeless design that your grandchildren will remember in decades to come.

There have been changes to the Crosman 760 over the years. Unlike automobiles, phones and software that always remains the same, Crosman has seen fit to make changes to their airguns as the decades pass. We are looking at what is — not what was. On that basis I will pick up right here in Part 2.