Today I start a report on the Gamo Swarm Fusion 10X Gen II breakbarrel repeating spring-piston air rifle. Repeating spring-piston air rifles are coming back in force, and I have already reviewed the Gamo Swarm Maxxim for you two years ago. I didn’t find that rifle to be very accurate, but it did feed reliably and had a very nice light trigger. At this year’s SHOT Show I met Gamo VP of sales, Joe Syring, who talked to me at length about the rifle I am reporting on today. I got a good feeling from him that Gamo is really trying to meet the needs of the airgunning marketplace, and this is just one of the ways they are doing it.

The Swarm Fusion 10X is a breakbarrel repeater that’s powered by Gamo’s own Inert Gas Technology (IGT) gas piston. It’s a spring-piston powerplant whose gas-powered spring is built into the piston as a unit. Now, there are a number of repeating spring-piston air rifles on the market these days. What makes this one different is its 10-shot rotary magazine is horizontal instead of vertical, allowing the repeating mechanism to have a lower profile. That design brings up a very important question. Can the pellet be fed reliably this way, when it has to be manipulated to feed into the breech? I certainly hope so!

You know that I don’t like to make comparisons between products. But I will make a small exception today. I have recently tested the new Umarex Synergis underlever repeater for you and found it to be relatively light to cock (for a gas spring), reliable and very accurate! It’s priced $110 less than this rifle and it delivers a lot of performance at that price. So this Swarm Fusion 10X has a lot of competition! Well, Gamo knows how to make airguns and I’m rooting for this one to deliver on all that it promises.

The rifle is adult-sized, at 45.7-inches long with a pull of 14-3/4-inches. So it feels man-sized. But the weight of just under 6 pounds is fantastic. Gamo has long been building lightweight spring-piston air rifles and this one fits right in their stable!

The stock is glass-filled polymer synthetic. The butt pad is Gamo’s Shock Wave Absorber (SWA) recoil pad. I will comment on the firing cycle more in the reports to come, but I did shoot the rifle today and it is smooth. It does not slap your face the way some gas pistons do.

How do it know?

There is an old joke my buddy Mac used to tell about a guy who was fascinated by a thermos that keeps hot drinks hot and cold drinks cold. He asked his friend, “How do it know?” That was how I felt about this loading system. How can it take a pellet that, at rest, is positioned 90 degrees perpendicular to the breech, and turn it to insert it perfectly without damage? That has long been the bane of repeating spring-piston pellet guns.

I photographed it for you. As the rifle is broken open to cock, the entire magazine and the mechanism that holds it rotates up and turns 90 degrees, to align with the breech. As it does, a pin pushes the pellet out of the mag and into the breech. It’s a complex mechanism that Gamo seems to have perfected. 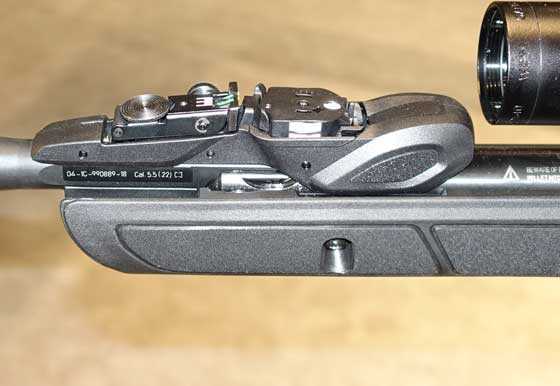 The 10-shot magazine sits flush with the receiver when the barrel is closed. 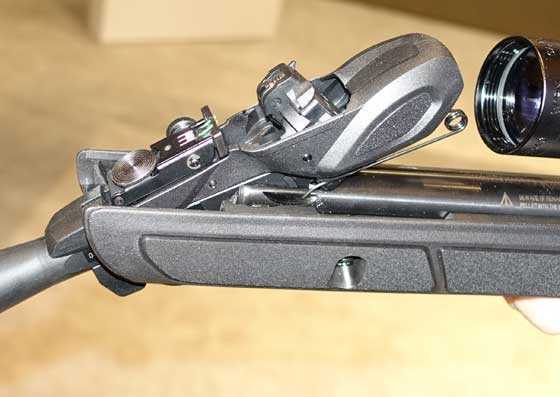 Opening the barrel just a little causes the magazine mechanism to turn the mag 90 degrees for loading.

One last thing — the mag can be loaded without removing it from the rifle. That means you can top it off at any time, and change pellet types when you do. Shooting single shots is simple — just put one pellet into the mag and cock the rifle! Done!

Today isn’t the test for cocking but I just had to shoot it a couple times! This rifle cocks so easily! I’m put in mind of Sig’s ASP20 with this one! The secret to the light cocking with the power Gamo advertises (1,300 f.p.s. with lead-free Gamo PBA pellets and I will guess around 1,100 f.p.s. with lightweight lead) is how far the piston travels. That can be seen when the barrel is fully broken open. 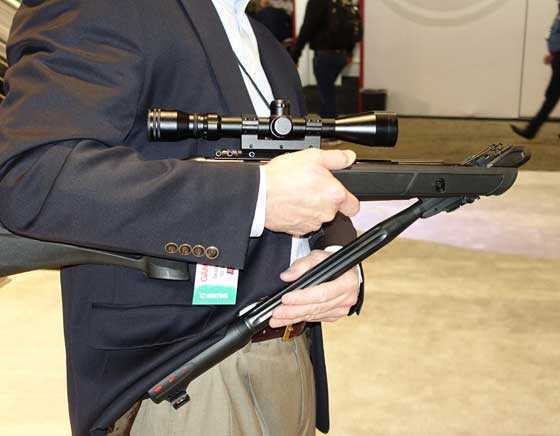 See how far back the barrel comes to cock the rifle? This is for the operation of the pellet-loading mechanism as well as to cock the gas piston that has an extra-long stroke.

How many pellets are left?

With a repeater like this you can cock and fire the rifle without a pellet being fed — what we call dry-firing. Gamo has made the magazine with a window in the back to tell you how many pellets remain. The number in the window indicates how many pellets remain inside the magazine. So if you see the number 3, it means there are 3 more pellets in the mag. 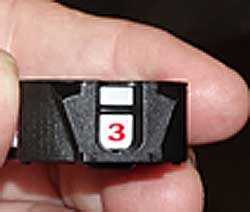 The three indicates there are three more pellets in the magazine that can be loaded into the barrel.

If no more pellets remain in the mag a warning triangle (international warning) appears in the window. There are now no more pellets in the magazine. However, if you just cocked the rifle there may be one in the barrel. I say “may” because if you haven’t been watching the mag window you may have already fired a dry shot and the barrel may be empty. 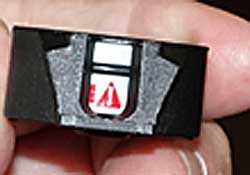 When there are no more pellets in the magazine this international warning symbol appears in the window.

One last thing about the mag. It does not interchange with the standup magazine for the Gamo 10X rifle. That one stands up vertically and works differently. For this Swarm Fusion 10X you need the mag that lays down.

Another feature Gamo has put on the Swarm Fusion 10X Gen II, to better position the rifle in the marketplace, is offering it with their Custom Action Trigger (CAT). Back in the day, and I’m talking 40+ years ago, Gamo triggers came out of the box very heavy and wore in to a light, smooth pull. Then, during the ’90s their triggers weren’t so good. But just after the turn of the new millennium they got a lot better, and this CAT is an example of that. Today is not the day for testing the trigger, either, but when I do it’s going to come out good!

One really nice feature of the CAT is that the safety doesn’t set when the rifle is cocked! The lawyers have listened and the rifle requires the shooter to know what’s going on.

The Swarm Fusion comes with open sights installed. They are fiberoptic front and rear, and their presence, plus the lower profile of the magazine, gives the shooter the opportunity to shoot with them if he wants. They are fully adjustable with soft (non-audible) detents. I plan to test them for you.

This rifle also comes bundled with a 3-9X40 Gamo scope and mounts. They install on what Gamo calls a Recoil Reducing Rail (RRR). It’s an 11mm airgun dovetail rail that puts me in mind of the very similar rails some BSA spring rifles have. Of course Gamo now owns BSA, so no surprise there.

The Swarm Fusion 10X has a Whisper Fusion silencer integrated into its polymer-jacketed steel barrel. It’s wide enough to give a good handhold for cocking and looking inside I can see what appear to be either one large baffle or perhaps a cup to reflect the pressurized air. Because this is a spring gun most of the sound is generated by the powerplant and not by the pellet exiting the barrel, but I have no doubt this silencer works.

I have to say — so far I am impressed. The Swarm Fusion 10X is lightweight, powerful, smooth-shooting, relatively quiet and doesn’t vibrate much at all. I like the trigger and I’m looking forward to really testing it.

I know this rifle is priced a little higher than some others, but it’s a repeater with a nice trigger. If it’s also accurate, Gamo has a world-beater on their hands!