Today I’m starting a new report on an interesting BB gun — the John Wayne Lil’ Duke BB gun with scope. This is a licensed John Wayne BB gun made exclusively for Air Venturi, and I selected the one that comes bundled with a scope to test for you. Let’s get right into it.

In the world of spring-piston BB guns there is not much that’s new under the sun. Unlike breakbarrel spring rifles that are pushing the boundaries of design these days, spring-piston BB guns don’t innovate that much. The Daisy lever action gun design type is nearly exclusive worldwide. There have been a few different BB gun designs over the years — guns like the ones made by Parris many decades ago. They appear quite odd and foreign to our “Red Ryder” eyes. And El Gamo made a unique BB gun around 1930. There have been a few others like the Pioneer underlever in 1976, but BB guns of a style unlike the Red Ryder are not common.

So the Lil’ Duke is pretty unique. I will try to describe it for you.

The Lil’ Duke is a folded-metal gun that’s made with a solid tube rather than a welded one. Daisy took great pride in 1913/14 when they learned how to weld thin sheet steel without burning it away. That released them from the onerous task of soldering a patch over the outer tube to seal the air inside the compression tube. Since that time almost all BB guns have been made this way. But not this Lil Duke. It has a solid tube instead of a welded one. I have a 1906 Columbian BB gun that also has a solid tube, but it’s a separate part. This one isn’t.

The Lil’ Duke’s tube is part of the receiver that is formed by folding metal — made by a process I don’t understand. There is a deep swage halfway up the outer tube (at the end of the forearm) that obviously holds the end of the compression chamber in place. 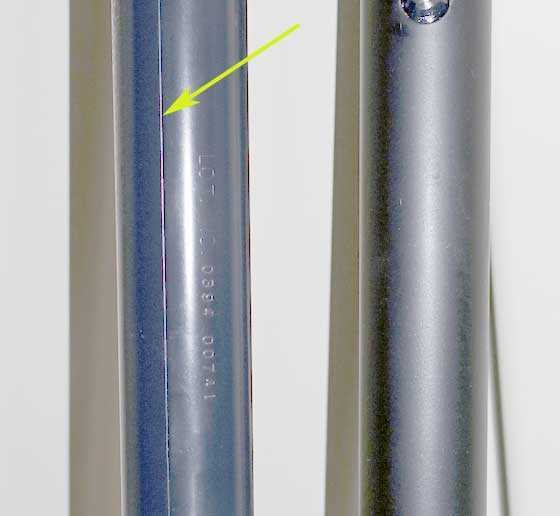 A Daisy BB gun tube is welded and has a join line (arrow) like this 499. The Lil’ Duke tube on the right has no weld.

The Lil’ Duke receiver is what I will call a thin-body. That’s in contrast to several Daisys like their 499 that have wider bodies. 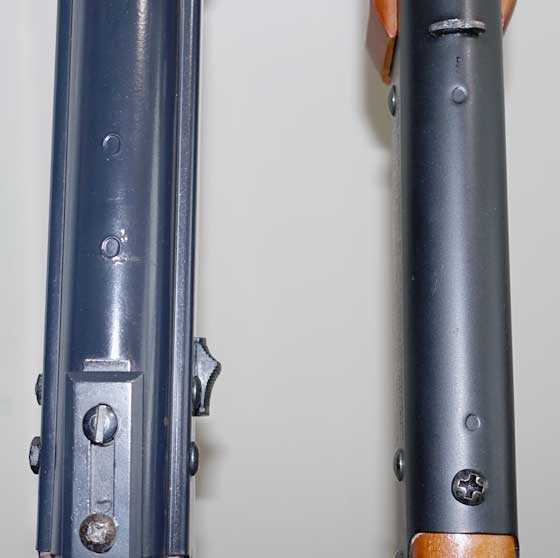 The Daisy 499 on the left has a wide receiver. The Lil’ Duke receiver is thin in comparison.

The BBs are loaded in the same way that Daisy used to use. The shot tube is turned to either side, opening a hole in the underside of the outer barrel sleeve through which up to 550 BBs are poured. Daisy changed over to a spring-loaded plastic window near the muzzle years ago and I have never gotten used to it. So this Lil Duke harkens back to the old days — something a silverback like me appreciates. 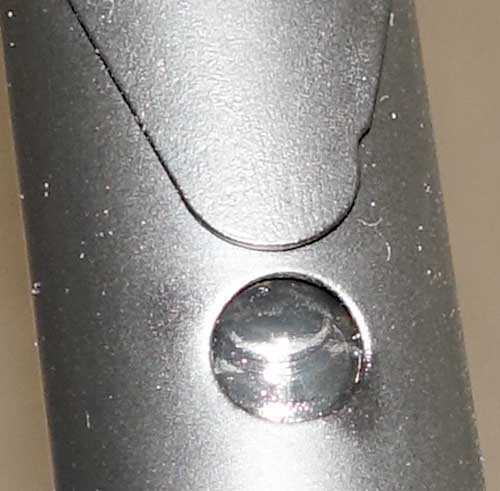 The Lil’ Duke loading port is under the outer barrel. Here it is closed to hold the BBs in. 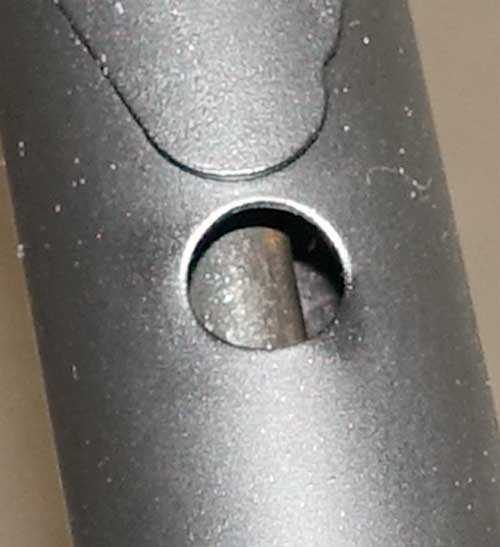 Rotate the knurled muzzle and the port opens for loading.

The shot tube does not unscrew from the gun the way a Daisy shot tube used to. Consider the tube in the Lil’ Duke to be a permanent part of the gun that isn’t coming out.

The gun is cocked via a lever, but this one is shaped like the lever on the Duke’s Winchester 92 he used in several movies — the most famous of which was his charge at the end of the movie, True Grit. “Fill yer hand…!” That special lever allowed Wayne to twirl the rifle, cocking it as he did, so he could fire more rapidly than a normal lever would permit. The small model ’92 action that fires pistol calibers is far smoother than the larger ’94 action that shoots rifle calibers. More people are familiar with the rifle caliber gun, but it is much stiffer and cannot be handled the same as the smaller pistol caliber rifle.

The Lil’ Duke lever itself is made of a dense plastic that feels slightly cold — something I have never felt before. Usually plastic parts are warm to the touch, which is how you know they are plastic and not metal.

When the gun is cocked the lever is incrementally caught by a catch to keep from slamming back on fingers if the hand slips. The catch is silent, so the only way to tell it’s there is to relax tension on the lever at some point and see that it stays open. This means if you start cocking the action you have to go through with the task. Once the lever is caught it has to go all the way to cocked before it returns home. 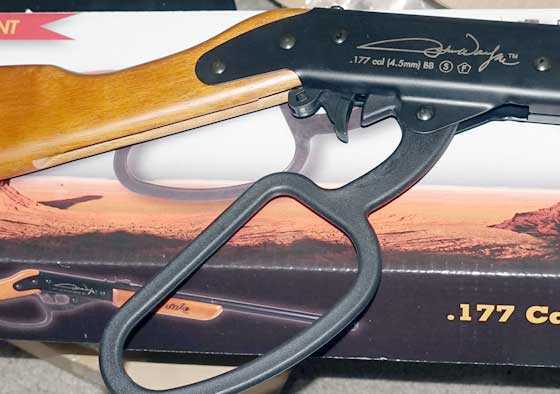 As the lever is cocked, a silent latch grabs it until the gun is completely cocked. This is for safety.

The front sight is a fixed post on a folded metal sleeve that’s spot-welded to the outer barrel. It can only be removed by cutting or grinding it off.

The rear sight is a leaf that adjusts for elevation by a sliding elevator. It has 4 steps. The elevator can be removed to allow mounting the 3/8-inch dovetail scope base that’s included with the model I’m testing. There is no provision for adjusting the rear sight for windage.

The gun I am testing comes with a 4X15 scope that’s packaged separately. I will test it for you at the end of this series, so I’ll wait to show it to you until then.

The trigger is plastic and the crossbolt safety fits into it, just behind the blade. The safety is manual, as it should be and very easy to engage and disengage.

The metal parts are all finished in an even matte black color. I don’t think it’s paint. It looks more like black oxide. Whatever it is, it’s very even and makes a nice background for John Wayne’s signature on the right side of the receiver.

The gun is 34-inches long and weighs 2 lbs. 10 oz. Obviously it will weigh a little more when fully loaded. Is it sized okay for a kid? Well kids come in all sizes, too, so that question really depends more on them than it does the airgun, but the Lil’ Duke is a very light and compact BB gun.

The gun cocks with 16 pounds of effort. I will check that for you when I get to Part 2. But in just handling it for this report I will say that it will challenge the real small kids. For an adult it is easy enough.

I am surprised to read that the gun shoots BBs at up to 350 f.p.s. I would have expected 100 f.p.s. less. No doubt that’s with the lightest BB on the market, which is the Dust Devil, and I will test it for you in Part 2.

I will test the gun in the usual fashion. I’ve already confirmed that it loads reliably, so I can switch from one BB to another with confidence when I test velocity.

I will test it for accuracy at the same 5 meters that I test all BB guns, but if we see great accuracy I will consider backing up for another test. The scope test will probably be a report of its own, but I’ll know better when we get there.

The John Wayne Lil’ Duke BB gun is unique and different, yet it has the flavor of the good old days. Don’t overlook it as a child’s first BB gun. Or yours, for that matter!