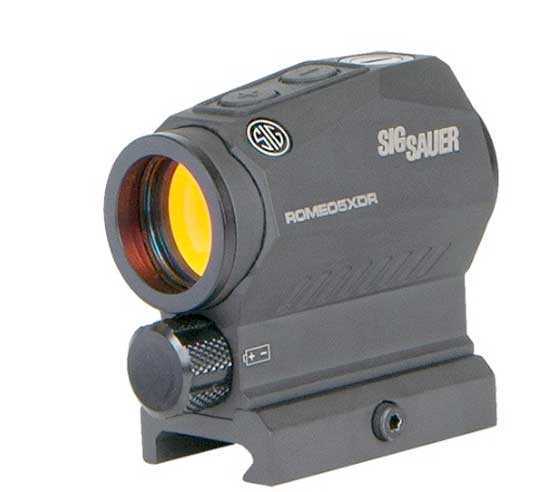 I have linked this report to the Sig Virtus report because this sight is going on that rifle for the next test. I should have mounted the Romeo5 on the Virtus for the first accuracy test, but I discovered too late that I hadn’t.

But maybe that is a blessing in disguise, because I will now review the sight by itself before putting it into use. Pyramyd Air doesn’t currently carry the Romeo5 line but I received an email from a blog reader who goes by the handle SqueezeBox. He owns two of them. He was glad I was reviewing the sight because in his opinion it is the best dot sight on the market. Let’s see what he feels that way. 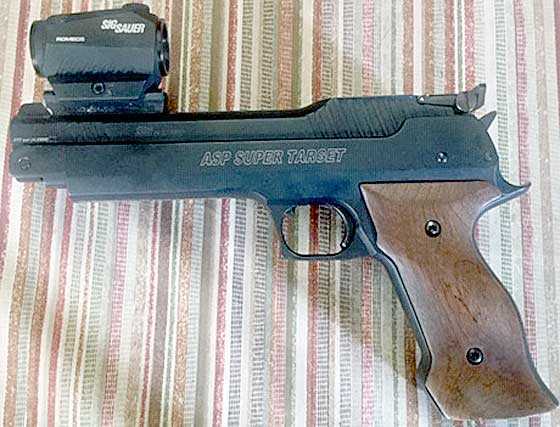 SqueezeBox mounted a Romeo5 on his Sig Super Target. He loves the sight!

I conversed with Sig representatives as I was researching this report and they told me what XDR means. The X stands for extended battery life and the DR stands for dual reticle. I’ll cover both today.

Okay, the reason I don’t like sights that use batteries is I believe the batteries always go dead at the most inopportune times. I remember the days when the Tasco Pro Point that uses two CR2032 button batteries would eat them up in just a few hours — maybe 20! Now quick, try to find two CR2032 batteries in the gift shop at Tanana Adventure Sports trading post at the end of the Alcan Highway, just north of Delta Junction, Alaska! No? Too bad! I guess you don’t get to hunt on this trip.

Not realistic? Maybe not, but that was always my fear. Sure you can carry spares and of course you do — but they were in the pack you left back in Seattle. With your camera, extra clothes and spare water jug? I know a lot of you feel the same.

The Romeo5 uses one triple A battery that you can find almost everywhere — even in the GUM department store in Novosibirsk. Better yet, that one battery gets over 50,000 hours of operation under normal use. The sight has what Sig calls MOTAC — motion activated operation that powers the sight off when it doesn’t sense motion for a period of time and back on when motion is detected. Of course I had to test that and found that the sight I am testing turned off after 220 seconds of inactive time. A slight jiggle turned it back on. MOTAC works. I know — this is a tough job but somebody has to do it! If it wasn’t me it would fall to one of you.

The Romeo5 is considered a compact sight. It’s certainly smaller than the large tube dot sights you see these days. It’s 2.5 inches long by 1.4 inches wide and 2.6 inches high — though some of the height is reduced by the amount of sight that clamps around the base it’s attached to. It weighs 5.6 ounces with a battery installed.

I know — manuals are for beginners, right? Well, color me new because I read it! I had to, to find out how to turn the thing on. I installed the battery they sent and pushed one of the two illumination adjustment buttons on top of the sight and nothing happened. Oh, oh! Did BB get a bad one?

No, BB got a good one, but there are several things he needed to know when turning the Romeo5 on. First and most important is — the sight does not turn on by just clicking one of the adjustment buttons! You have to hold either one of the adjustment buttons down for longer than one second to turn the sight on. I would estimate that it takes close to 1.5 seconds for the sight to respond to these buttons. The same to turn it off. The manual tells you that.

The two buttons on top of the Romeo5 increase and decrease the illumination of the reticle. They also turn the unit on and off and they toggle between the two reticles. 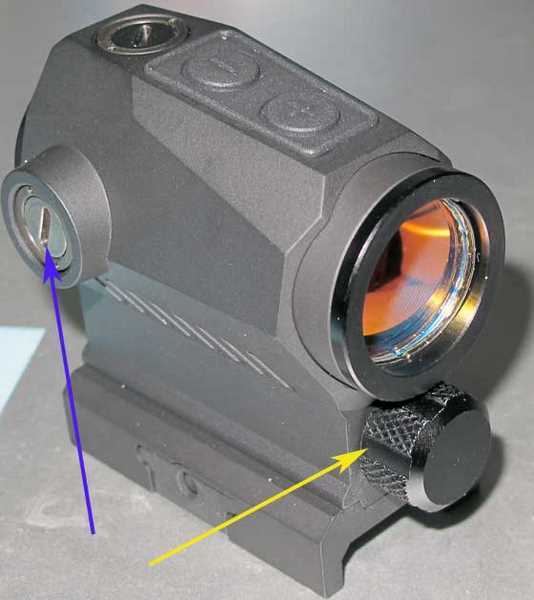 The battery goes in under the cover located in the front of the sight (yellow arrow) and the windage is adjusted by the screw on the right rear (blue arrow).

Next — what level of illumination was the reticle set at when it was turned off? Because that will be the level when you turn it back on. There are eight levels for daylight operations and two for night vision. If it was set very low you may not be able to see it when it comes on again. That was the problem I had, because, before reading the manual I fiddled with the buttons for quite some time. I’m an airgunner — so of course I did! The solution is to hold the button down long enough to turn on the sight, then keep toggling the plus button while looking for the dot. If you are not sure whether the sight is now on or if you just turned it off, repeat the process until you see the dot. Then leave the dot on max until you need to use the sight. The good thing is when you get to the top it doesn’t drop back to the bottom. You need to push the other button for that.

How bright is the light?

One concern I have, being red/green colorblind, is seeing a red dot in bright light. But the designers thought of that. First, they didn’t make the dot pure red, but skewed it to the orange like a traffic light to make it stand out. And second, at its brightest setting I can see the dot against the clouds on an overcast day. I can also see it against my neighbor’s spotlight on their house about 100 yards away. Then I shined a 120-lumen flashlight into the front of the sight from 8 inches away. I could see the dot right up to the point it entered the bright light that was shining back. I have never done a test like this before, but this is such a serious sight that I wanted something to express the brightness of the dot. I will do this when testing all dot sights in the future.

There are eight levels of daylight illumination. I can see six of them in a darkened room —  five in a room that’s well-lit. I can’t see the two lowest levels at all, nor can I see either of the two night vision levels below that. I don’t own a night vision device so I’ll take Sig’s word they are there. Having them might sound silly to you, but there are airgun hunters using night vision right now for things like rats and feral hogs. So, this feature has value to some, if not to all. And you get it in the Romeo5.

One big reason the dot is so visible is it is an LED that’s reflected off a specially coated glass screen instead of a laser that’s run through several lenses before it gets to your eye. The additional lenses the laser uses make the dot less bright and also more susceptible to parallax problems. With the 20mm Romeo5 you give up a larger window for improved clarity and less parallax. 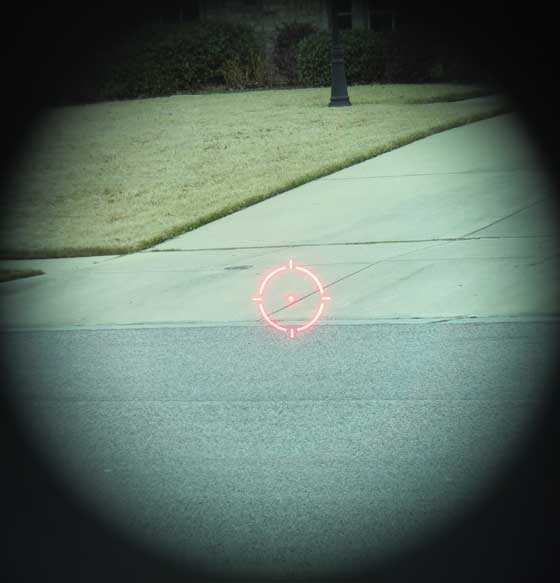 This driveway is about 40 yards away. As you can see, the reticle can be seen easily against a light background.

Top of the line

The Romeo5 exists in several versions. The high mount version is on sale at this time for $159.99. The Romeo5X, Romeo5 TREAD and Romeo5 standard height sights are all retailing at $199.99. The Romeo5 XDR that I am testing for you retails for $299.99. So — what is the difference? The choice of two reticles.

The XDR has a choice of two reticles. One is a conventional 2 MOA red dot and the other is a 2 MOA red dot inside a 65 MOA circle. You would use the circle for faster target acquisition in operations like clearing buildings and so on. When I was in the Army my tank had what we called an infinity circle sight for our coaxial machinegun. Put your target in the circle and hold down the trigger. It’s like spraying wasp and hornet spray on a nest — gets rid of everything it touches. For hunters and precision shooting, use the dot by itself. 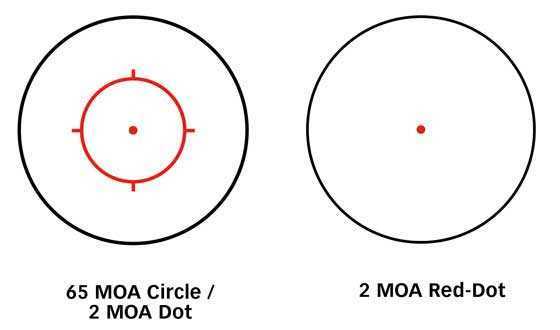 The Romeo5 XDR comes with an additional plate to increase the mounting height. Folks with AR rifles care about that — airgunners don’t. We want our sights as close to the boreline as we can get it. 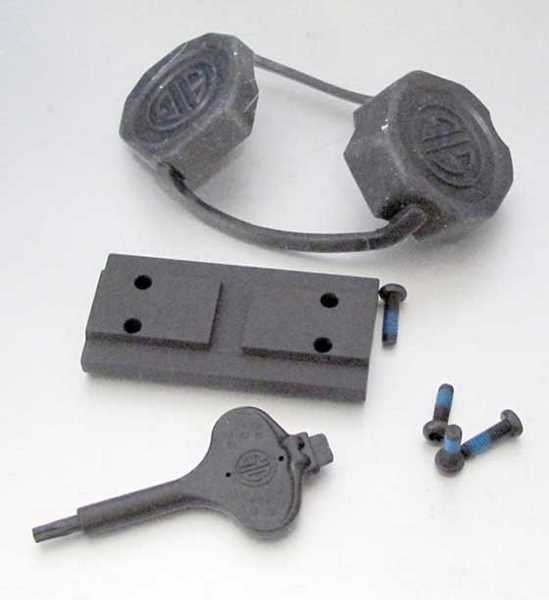 The plate and screws to raise the sight, the Torx driver and screwdriver and the bikini lens caps.

Along with the plate come 4 longer screws to attach the plate to the sight, plus a Torx wrench and flat-bladed screwdriver in the shape of a key, for mounting the sight and adjusting the reticle. You also get nifty bikini lens covers.

There is more going on with this Romeo5 XDR than I have ever encountered in another dot sight. It was built for high-end applications and we just lucked out that Sig chose to send it to me for testing both the Virtus pellet rifle and the Virtus airsoft gun that I haven’t started yet. We’re going to have some fun.

That’s it for the sight. The next time you see it, it will be atop the Virtus pellet rifle and we will be testing it for function during an accuracy test.