In Part One I told you I was testing the smaller version of the Springfield Armory XD-M pistol. There is a larger pistol whose barrel is 4.5-inches long. The pistol I’m testing has a 3.8-inch barrel. On the cover of the owner’s manual Air Venturi refers to this one as the Compact. The other one they call Full-Size.

The manual distinguishes between the Full-Size pistol and the Compact I am testing.

The Full-Size pistol has a conventional grip. The Compact has a grip that’s in two sections. Let me show you. 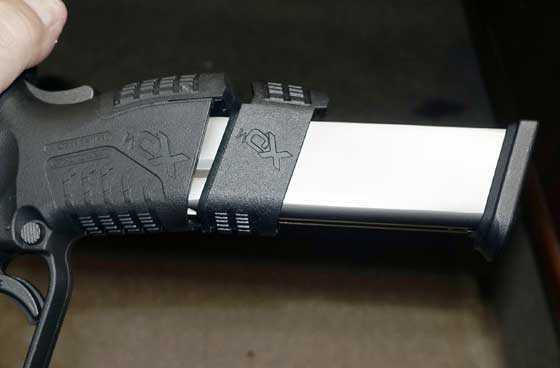 The gip of the Compact pistol has a separate section that’s held in place by the magazine. I left the magazine sticking out in this photo.

When the magazine is locked in place, it holds the separate grip section in its place. The grip then feels like the grip of the Full-Size pistol. The only thing that’s smaller on the Compact pistol is the shorter barrel and slide.

The Compact version of the firearm does not have this two-part grip feature. It has the same 3.8-inch barrel as this BB gun, but the grip appears full-sized and solid. It must not be quite full-sized though, because Springfield Armory differentiates between the magazines for the Compact and for the Full-Size handgun.

On the BB guns the magazines for the Compact and Full-Size guns both hold the same 20 BBs. So in terms of the grip size, they are the same. But the Compact barrel is 0.7-inches shorter than the Full-Size barrel, so the velocity will be lower.

To install a fresh CO2 cartridge the magazine floorplate must first be removed. 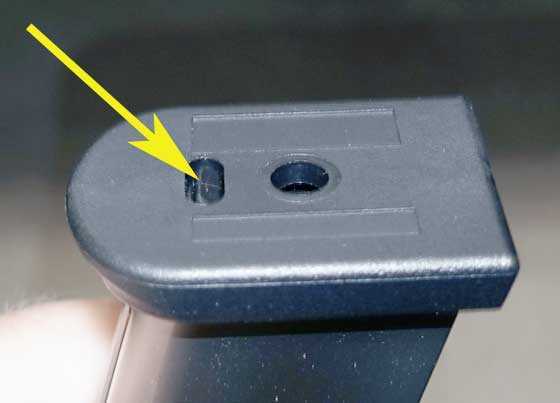 The magazine floorplate has to come off to install the CO2 cartridge. Press down on the button (arrow) and slide it off. 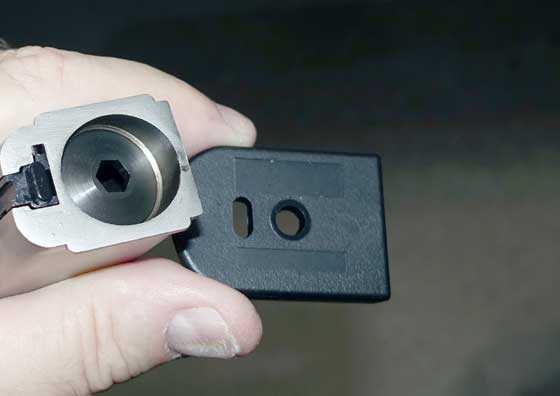 The magazine’s floorplate comes off and the CO2 cartridge end cap is accessible.

Once the floorplate is off the end cap is unscrewed by a large Allen wrench that comes in the box and a new cartridge is dropped in. Obviously the piercing pin is deep inside the grip, so I inverted the pistol and dropped in three drops of Crosman Pellgunoil before inserting the cartridge and screwing the cap down. I never heard the slightest puff of gas, and the cartridge pierced perfectly. And the floorplate went right back on.

Not a small pistol

I have to comment that the Compact XD-M is not a small pistol. In fact, it is on the large side. A little bigger around than a classic M1911A1 grip, by a few millimeters. Mostly that’s due to the width of the firearm double stack magazine, which the BB gun faithfully copies. My point is, this BB pistol is for regular-size to larger paws. Not giants, perhaps, but larger hands for sure. 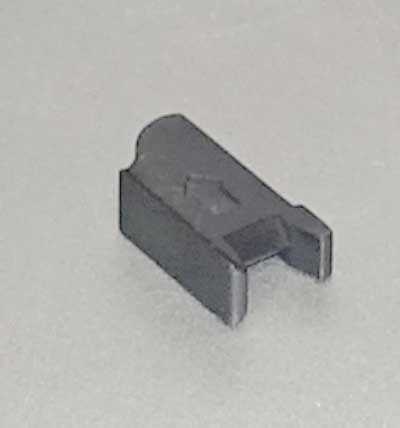 This little piece of plastic does nothing to assist loading!

This gun is sold by Air Venturi, so I tested their BB first. Ten shots averaged 288 f.p.s. The low was 284 and the high was 290 f.p.s., which is a difference of 6 f.p.s. Two shots failed to register on the skyscreens, so this string actually took 12 shots.

I waited a minimum of 10 second between shots and sometimes a lot more. I tell you that because the CO2 cools the gun as it flows, lowering the gas pressure and slowing down the BBs. Though I must say this gun doesn’t have that problem as much as most CO2 pistols.

Next up were Air Venturi Dust Devils. At 4.35-grains (though I measured them in Part one at 4.6 grains)  these BBs are slightly lighter than conventional steel BBs. Through the XD-M they averaged 287 f.p.s., though the spread was much larger. It went from a low of 276 to a high of 297 f.p.s. — a difference of 21 f.p.s.

Slide does not remain open

In this string two shots failed to register and the slide did not remain open after the last shot, so another blank shot was fired at the end. On that blank shot, though, the slide did stay back. To get the 10 shots that registered on the chronograph I had to shoot 13 shots. I’m telling you this because I’m doing the shot count as I go.

We know that the lead Smart Shot BB is heavier, so it will go slower, but in a CO2 gun it won’t be as different as it would in a spring-piston BB gun. Smart Shot averaged 252 f.p.s. in the XD-M. The spread went from a low of 248 to a high of 259 f.p.s. — a difference of 11 f.p.s. There were no failures to record any velocity on this string and, although the slide did not remain back after the last shot, I did not pull the trigger again.

At the end of the last string there were 35 shots on the CO2 cartridge. I wondered if the gun was still shooting at its best, so I fired another string of Air Venturi BBs. Nine of the 10 shots registered, giving an average of 282 f.p.s. In the first string the average was 288 f.p.s.

The low for this string was 276 and the high was 287 f.p.s. The high was the very first shot and the low was the last shot, so the gas is starting to run out. But the power is still good, so I continued shooting Air Venturi BBs. There are now 45 shots on the CO2 cartridge.

The next string is indicative of gas pressure decline. I will show the entire string.

Yes, the gas is definitely running out. But the slide still cocks the pistol and still does not remain open after the last shot. There are now 55 shots on this CO2 cartridge. Since the gun seemed to be shooting okay, I shot four more times. Let’s look.

After these shots (shot 59 was the last one fired) I shot 9 more blank shots and the gas exhausted itself. The slide continued to blow back right to the end, though not far enough to cock the pistol on the last couple shots. From that data I’m saying there are about 50-55 good shots on a CO2 cartridge.

The pistol does have a full blowback slide. It imparts a smart push to the hand that simulates recoil pretty well, though nothing like the force of even a .380 ACP cartridge. It’s more like a .22 Short.

The two stage trigger is single-action. Stage one takes one pound and stage two breaks crisply at 2 lbs. 14 oz. For an action BB pistol that is right there with the best of them.

The XD-M pistol is very realistic. It has a beautiful trigger. The Compact model that I am testing is on the large side.

The blowback is realistic. The slide does not remain open after the last shot. That is probably a magazine issue that will vary from mag to mag.

So far so good. The pistol behaves like a good copy should. Of course we are waiting to see the accuracy, and with a trigger as nice as this I hope this pistol can drive tacks!