You readers know that I select the topics I write about and the guns I test. Pyramyd Air who owns this blog has given me great latitude to run the show as I see fit. And that arrangement has worked well for 15 years.

However, every once in awhile Pyramyd Air gets a product they would like me to test. They are taking a risk, because they know that I will test it and report whatever happens — both good and bad. I try not to insult anyone when I write about a product, but I also tell the truth as it unfolds, because I worry about the guy who can only afford that one airgun and may base his decision on what I write. Pyramyd Air knows that and trusts that I will be as honest as possible.

But I am not the only guy in this town! Pyramyd Air has some very capable people working for them, and you know them because they comment on this blog. We all appreciate Gene Salvino who tells us things about the inner workings of certain airguns that he sees in his position as a repair technician. And product manager Tyler Patner is a world-class field target competitor who enjoys shooting airguns as much as any of us. You have probably seen several of his interesting Pyramyd Insyder videos on the website. He also comments here from time to time.

So, when Tyler phoned me a couple weeks ago and told me I needed to look at the new Air Venturi Avenger PCP rifle, I jumped at the chance. He sent me a .22 caliber Avenger to test for you (they also come in .177 and .25) and I am starting today!

The Avenger is one more Price-Point PCP (PPP) that is joining one of the hottest segments of the airgun market. But it seems like the manufacturers are putting more and more features into these airguns that used to be considered basic. Let’s look at the list for the Avenger.

There are other features that I’ll cover in the report as we go, but just what I have listed puts the Avenger at the top of the price-point pyramid. Only a year ago we were all dancing in the streets just to get a regulator in a PPP and now we have one we can adjust, not to mention the two-stage adjustable trigger!

This is a powerful PCP! In .177 caliber the website says to expect up to 22 foot pounds. In .22 that jumps up to 34 foot pounds. And in .25 it goes all the way up to 45 foot pounds. Of course that is with the heaviest pellets, as pneumatics always deliver their greatest power with the heaviest projectiles. What I advise is finding an accurate pellet whose energy you can live with. Numbers are meaningless without results.

No, the sidelever cannot be moved to the left side of the receiver. We had better consider the Avenger a right-hand air rifle for now. 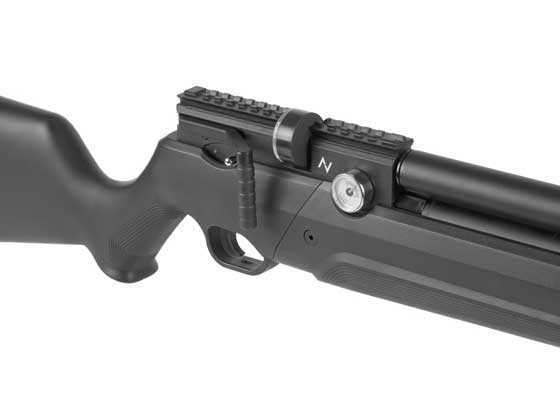 The sidelever is on the right side and cannot be switched. It’s a slicker way to work the bolt.

And let’s get something straight. A sidelever operates a bolt, so the Avenger is really a bolt action rifle with a slick mechanism to operate it.

The max. fill is 300 bar, or 4,351 psi. That rules out a hand pump for all but the most rugged guys, but it’s prime territory for the Nomad II compressor. Why not let the electric pump do all the work? The problem with such a high fill level is after you fill the airgun from a carbon fiber tank one time you no longer have 4,351 psi left in your tank. But a Nomad II should fill the 180cc reservoir fast. Naturally I will time it for you.

The rifle comes without open sights. The top of the receiver accepts both 11mm dovetails and Picatinny dovetail mounts. I will use the wider Picatinny base simply because it is more secure and because many of the scopes I have now come with Picatinny mounts.

The Avenger scope base accepts either 11mm or Picatinny dovetail mounts.

There is also a straight Picatinny base under the end of the forearm for a bipod. I have a beautiful UTG Pro TBNR bipod that I have been saving for a test like this. I will do a separate report on the bipod before I get into the accuracy test.

The stock is synthetic and the butt is hollow. That’s the only way you can get a rifle with all these features to weigh just 6 pounds. There are no adjustments on the stock and the length of pull is 14 inches exactly. The pistol grip is flared at the bottom, which I like, and it is very vertical, which I also like. The forearm is thin enough to be handy, but wide enough that you know you have something in your hands.

There are small holes at the front of the forearm and at the bottom rear of the butt for mounting sling swivel studs. That tells me the Avenger is being marketed as a hunting gun, which the potential power certainly supports.

There is a gauge on the left side of the receiver that monitors the air in the reservoir. A second gauge on the right side tells you the pressure to which the regulator is set. I will cover the method of setting the regulator in another report, but for now I will tell you that it sounds very straightforward when I read the instructions in the manual. 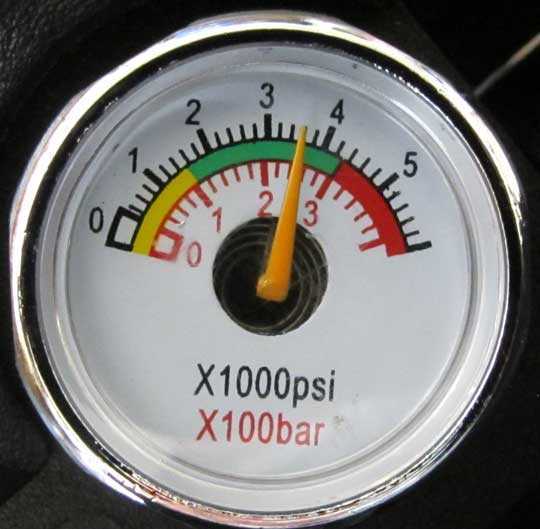 The gauge on the left side of the receiver tells how much pressure remains in the reservoir. 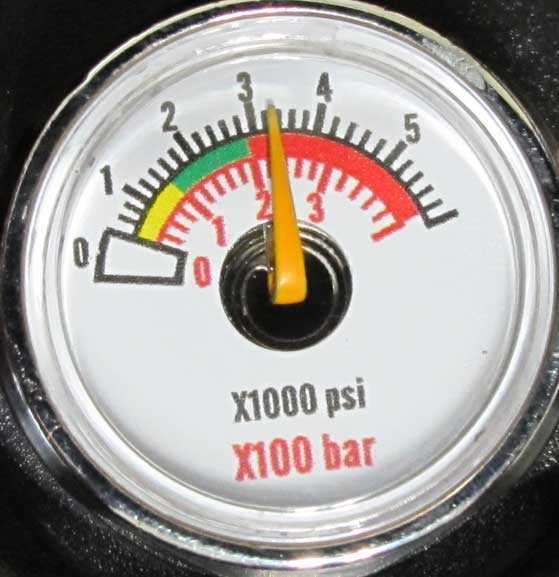 On the right side of the receiver the gauge tells the pressure to which the regulator is set.

Speaking of the manual, this one was either written by an American or perhaps by someone who understood how Americans speak. The instructions are straightforward and easy for me to understand. I think most Canadians will find them easy, as well, though they might have to write in an occasional “eh?” after some of the sentences.

Where is it made?

Okay kids — it’s time to get out your secret decoder rings because BB has a special message just for you! If you research the Avenger on the internet, and you know you’re going to, you will discover that this air rifle is indeed related to the Nova Liberty PCP. Related to, but not the same as. That means it is made in China, and more specifically in Macau. Macau is to China what Las Vegas is the the United States, except Macau is five times more active.

What is different between the two airguns is the Avenger is offered only with a synthetic stock at this time, where the Liberty does have a wood stock available for more money. But the Liberty does not come in .25 caliber as far as I can determine, and it does not have a user-adjustable regulator.  Also the power levels the Liberty achieves are lower than those of the Avenger in the same caliber. So, for the same money, the Avenger gives you more of the features you say you want.

There is an air chamber in front of the muzzle but I don’t see any baffles in the shroud. The rifle should be quieter than a barrel without a shroud, but not entirely quiet. At this power level its kind of hard to get it much quieter without baffles.

Pyramyd Air is sold out in all calibers as this blog is published, but they should be restocking soon. If you want one you had better nail it down , because this item will not sit around very long.