I could either replace the spring and do the second velocity test next or I could go on to the accuracy test with this spring and then do the spring swap and test everything again. I think I will do the latter for a couple reasons. It’s easier, and I am into easier. And, even if I were to do anything wrong while making the spring swap, we will at least get one complete test.

My hope today is to get the velocity for some reasonable weight BBs, and also to sample the RPM. Let’s go!

Sig provided me with a sample bag of 0.20-gram BBs with the gun. I have plenty of BBs in that weight, but I thought I would use theirs, since they were handy. They even loaded the speedloader — which made it more convenient.

I don’t know what brand BB Sig sent me. They don’t currently have an airsoft BB of their own, so I assume that these are a premium BB. But I weighed them to make certain. They weighed 0.20 grams on the nose except for one that weighed 0.19 grams. I am satisfied that these are premium BBs.

Getting the gun ready to fire

The Virtus AEG is a spring-piston airgun. It just uses an electric motor to rapidly cock and release the piston to simulate full-auto fire. That motor needs electricity to run, so the battery has to be installed in the forearm before the gun will fire. This step used to be extremely hard with the AR-15 airsoft guns I have owned, because the battery has to go inside the forearm that, on an AR-15, is not easy to remove or replace. But on the Virtus it is a snap! 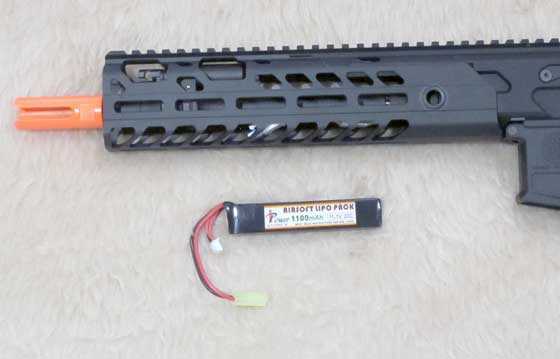 That battery has to go inside the forearm.

Knock out just one pin and the forearm slides off the receiver, exposing the connection plug for the battery. Remember, only the yellow plug on the battery’s longer cable is attached to the gun. The shorter battery cable is for charging, and doesn’t plug into anything while the battery is in the gun. 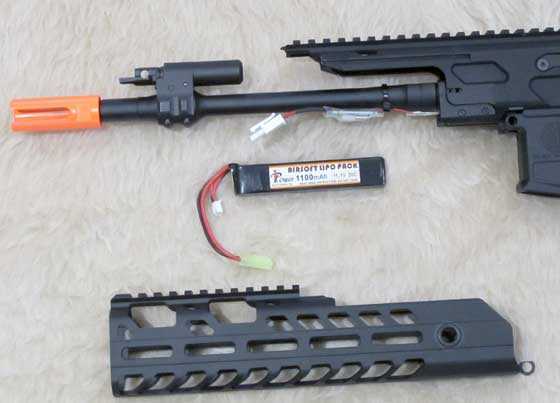 The yellowish cable connector on the longer cable of the battery connects to the gun’s white plug. The shorter battery cable with the white plug is for connecting to the charger.

I must comment on how much room there is for the battery. On the AR-15s I have owned it was a real task to get the battery to fit inside the forearm and then get the forearm back on the gun. And on one gun the battery went into the A2 butt, which was a real nightmare. I hated it, which is the big reason I got rid of those AEGs. The Virtus is a walk in the park by comparison. I could easily fit two of these batteries in the forearm — one above and the other below the barrel.

The forearm is back on the gun and pinned in place. The battery will fit either above the barrel like it is here, or below. There is plenty of room inside this forearm.

Now that the gun is ready to fire, it’s time to load it.

The Virtus comes with an AR-15 lookalike sheetmetal magazine, and from my past experience these mags hold several hundred BBs loosely in the bottom. They get scooped up to feed through the gun and sometimes you get misfeeds. Nobody complains, though, because AEG airsoft guns are fired full auto most of the time. However, B.B. Pelletier doesn’t do things like others do.

I wanted to load exactly 10 BBs into the mag. and shoot them through the chronograph for velocity, then change BBs to a different weight. And that was how I became familiarized with the Virtus mag.

The 120-round Virtus mag has a spring-loaded follower that pushes the BBs up and into the path of the bolt. There is no chamber full of loose BBs. To load this mag you have to hold a spring-loaded catch back for each BB while the follower tries to push the BBs that are already in the mag back out. After fiddling with it for a few minutes I had to change my loading strategy!

The speedloader is more than a convenience with the Virtus. It’s a necessary part of loading the mag. I have more to say about it, but for now that’s it. 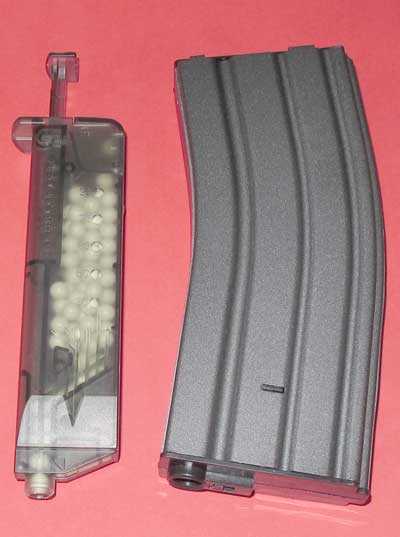 The first BB I tested was the one Sig sent with the gun. We already know that they are very consistent.

I loaded four 0.20-gram BBs (the speedloader pushes in 4 BBs each time the thumb button is pushed down) into the magazine and then attempted to see what the velocity was. I then fired the gun on semiauto and nothing came out! Oh, oh!

What I discovered was the Virtus is fresh off the assembly line and needed a little breaking in. I put the selector on Rock and Roll (full auto) and let the bolt cycle many times. It was fun just listening!

I then loaded about 20 BBs into the mag to fire. Once that many were in it fired perfectly every time. And later — after perhaps 50 more shots, it fired all the BBs, even when loaded with just a few. Now that she is running, let’s see what she does.

Sound and feel of the shot

I was shooting semiautomatically, so each pull of the trigger produced a single shot. There was almost no motor noise, though I could hear the pop of air from the piston. I could feel some gearbox vibration through the pistol grip, but the only real sound was the pop of compressed gas from the piston. I have shot many AEGs and this Virtus has the quietest gearbox and motor I have heard. It’s even quieter than an AR-15 whose gearbox I rebuilt with upgraded steel bearings and gears. That one still had an air-wrench sound to it.

Since I overloaded the magazine for the first test, I went outside and dumped the remainder of the BBs on full auto. That told me there is no way I will be able to give you an accurate RPM count. This Virtus sounds like the infamous German MG42 “devil’s zipper” machinegun that had a high cyclic rate. I can count AR-15 cyclic rate up to around 800 RPM. This gun is faster than that. I have read reports of 900 RPM. It’s every bit of that!

More about the speedloader

Now that I was comfortable loading the magazine with the speedloader I found it quite easy to empty the contents of the speedloader to change the BB weight for testing. Just load the mag, then open the speedloader hopper pour out all the BBs except one. Since all the BBs were white and looked identical, this was the best way to keep track of them for the test. That last BB would remain in the nose of the speedloader until I pressed it out after the next BBs were inside. You do have that kind of control over the thumb button. Then that lone BB was returned to its proper container and everything was ready for the next test.

Since AEGs don’t recoil I indulged myself and went full auto during this velocity test. All the BBs stayed together in a tight group, though my target was only a few feet away. I need to find a way to test full auto in the accuracy test, too!

I then tried some 0.30-gram Blaster Devil BBs from ASG. They averaged 333 f.p.s. with a 1 f.p.s. spread from 333 to 334 f.p.s. This average is getting pretty slow, so I stopped testing here. Obviously a heavier BB will shoot even slower, but I think we have bounded the useful range of velocity in today’s test.

An AEG operates with an electric motor, so pulling the trigger doesn’t release a sear like you might think. I will call this a single stage trigger, though the pull effort does increase after a lighter initial pull. The trigger “breaks” at 2 lbs. 2 oz. on the test gun and there is no hesitation of the trigger blade to alert you to the fact the gun is about to fire.

In the manual you are advised to shoot full auto in bursts to preserve the gearbox. You are told not to empty a 120-shot magazine on a single trigger pull. You are also instructed to return the gun to semiautomatic and fire it once blank after a run of full auto. That releases the mainspring in the gearbox. That is common for all full-auto AEGs.

This Virtus is stacking up very well at this point. It is outperforming another AEG that I custom tuned several years ago, so I am impressed. I hope it turns out to be accurate, though with a full-auto gun we aren’t looking for pinpoint accuracy. That’s not the way these guns are used.

Don’t forget there will be a second velocity test and a second accuracy test with the lighter mainspring after this test is concluded. So, there is a lot more to come. 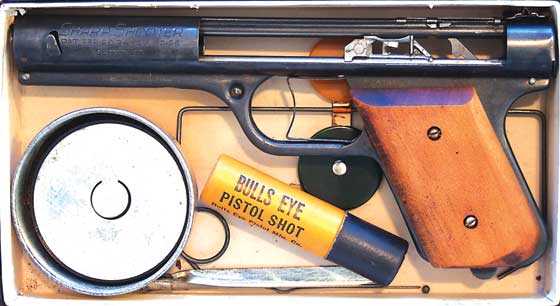