The Cayden looks conventional. The Akela is a bullpup repeater and the Kratos is a bottle-fed PCP. Both are repeaters like the Cayden and they all three come in .22-caliber. The Kratos bottle gun also comes in .25-caliber — the only one of the three that does. 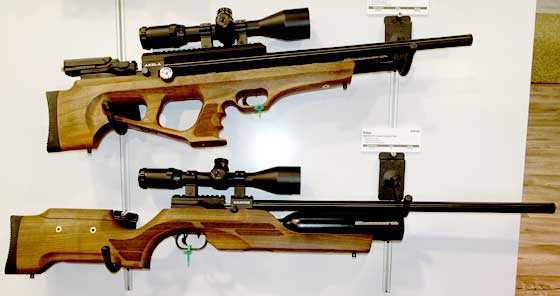 The Akela (top) and Kratos are the other two new PCP rifles in Benjamin’s Craftsman Collection.

Crosman’s product manager, Phillip Guadalupe contacted me with some information I requested and could not find on the Crosman website. First of all, what is the Craftsman Collection?

Right now Benjamin’s Craftsman’s Collection consists of the three rifle just mentioned. They are produced in Turkey exclusively for Benjamin. Benjamin conducted a survey to find out what their customers really wanted in a precharged rifle. The Foster quick-disconnect fitting for filling the rifle was a given, as were American-style quick-disconnect sling mounts. Seventy percent of those polled asked for a sidelever to operate the bolt, and I will throw my vote in there, too.

I was surprised to learn that 60 percent of those polled wanted a rifle with a removable air bottle. That would not have been my choice, but I can’t argue with 60 percent. That Kratos bottle holds 480 cc of air, where the Cayden’s reservoir that doesn’t remove holds 280 cc, yet both rifles are said to get up to 60 shots on a fill, with maximum power in the 32 foot-pounds realm. But only the bottle gun is offered in .25 caliber. All three are offered in .22. So these are hunting rifles, without a doubt.

All three rifles have genuine Turkish walnut stocks. The survey said Crosman customers were looking for an upgraded rifle — something without a synthetic stock or a plain beech stock. Turkish walnut is certainly the right way to go!

Crosman won’t say this but I sure can. With the current market heat from the price-point PCP arena, any new precharged air rifle has to have a very good price — especially here in America! The days of average PCPs retailing for $1,000+ are over. The Cayden we are looking at retails at $550. The Akela sells for $600 and the Kratos goes for $630. Just from an appearance and feature standpoint all three rifles look like a good value to me.

The rifle is 40.76-inches overall with a 20.87-inch rifled barrel. The weight is 7.95 lbs., with a small allowance for a variation of the wood. There are no open sights. The receiver has a Picatinney rail on the top that’s split into two segments by the magazine. This design indicates 2-piece scope mounts. 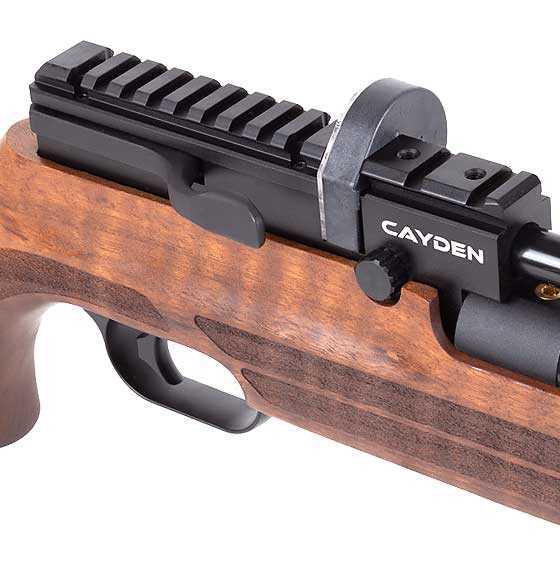 The Cayden sidelever stays on the right side of the receiver.

The cheekpiece is adjustable. That allows you to get a better sight picture through the scope that’s required. The Turkish walnut stock is stippled at the pistol grip. The stippling extends to the forearm. I will report on the feel of the rifle in part 2, but as I remember from the SHOT Show, it feels great!

The Cayden is filled to 3,000 psi. That was smart of Crosman, because higher pressures are still taxing for many shooters. The company says you can expect up to 60 shots from a fill. The reason they say “up to” is because the power is adjustable. 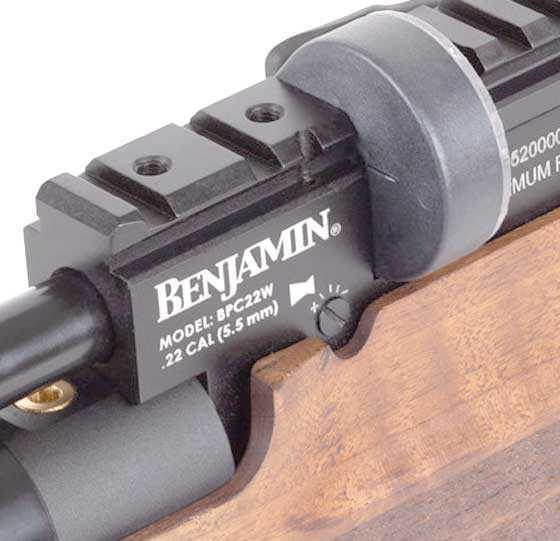 On the left of the receiver is the power adjustment scale that tells where the rifle is set. 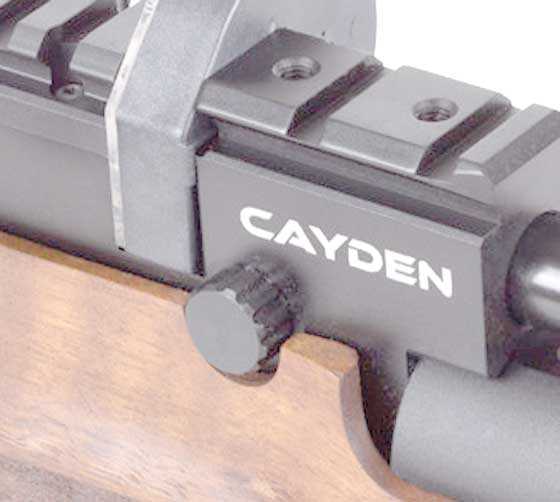 On the right side of the receiver is the knob for adjusting power.

There is no regulator. In Part 2 we will see how stable the Cayden powerplant really is.

The Cayden barrel isn’t shrouded. The muzzle brake is threaded and removable, so presumably an aftermarket silencer could be attached.

This is a chance to evaluate a new PCP from Benjamin that isn’t based in the Marauder. I know you will be interested in shot count, the power adjustment, the rifle’s report that is sure to be loud and the trigger. Of course accuracy will be above all other things.

Already the jungle drums are asking why Crosman had to go outside the country for these three rifles. I think the answer is obvious — to get them into the marketplace. People need to realize that developing a new air rifle isn’t a 12-month task. Each new platform absorbs the time of a great many people. Even products acquired from other companies take time to develop and mature.  Let’s evaluate these new rifles on their own merits.

49 thoughts on “The Benjamin Cayden: Part 1”