The LP2 was Walther’s first commercial success with a single stroke target pistol. It was produced from 1967 through 1972. Was there ever an LP1? There might have been, but if there was it didn’t last long enough to be officially recognized or to enter the market.

The LP2 was replaced in 1973 by the LP 3 that remained in the Walther lineup until 1985. The two pistols look quite similar, but as mentioned there were improvements made to the valve.

The Walther LP3 looks much like the LP2, but has significant improvements to the valve. Speaking of the valve, let’s look at a single stroke pneumatic valve now.

This drawing shows why only a single pump of air can be put into an SSP gun. The moment the pump piston seal clears the air inlet hole on the second pump, all the compressed air from the first pump is lost through the hole.

To pump the pistol, a lever is pulled down and back. It withdraws the piston and cocks the action at the end of the stroke. 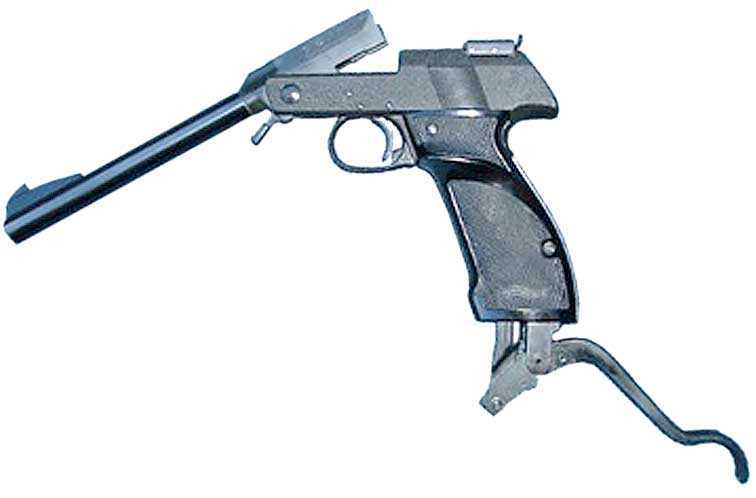 The pump lever has been drawn down and back to cock the action and prepare to pump the pistol. The barrel is broken open, though it doesn’t do so when the pistol is pumped. A lever underneath at the rear is pushed up to open it.

The LP 2 and 3 pistols are copies of Walther’s famed Olympia target pistols from the 1920s. They were rimfire target pistols that competed in the Olympics.

The Walther Olympia target pistol is the basis for the LP2 and LP3 air pistols.

What the LP2 was

The LP2 was a very accurate air pistol with good ergonomics for the time, It had a good trigger  and decent power for a target arm. Don’t compare it to target airguns of today. Compare it to other air pistols that are not as precise, well-made and accurate.

What the LP2 was not

The LP2 was the first of many single-stroke pneumatic target pistols that probably culminated in the FWB 103 and the IZH46M. The FWB is a world-class target pistol and the IZH 46M has many of those aspects, though they are not as refined. The Walther LP2 is far from such refinement. It has a good trigger, not a great one. It is reasonably accurate, not world class. Its ergonomics are primitive by today’s standards.

If Scott Pilkington can revive my LP2 I will conduct a traditional set of tests and make their reports for you. If not I know of another LP2 in working condition I can borrow. Stay tuned!