As you learned in Part 1, my new/old Walther LP2 target pistol did not work when I got it. So I sent it to Scott Pilkington for repairs. Scott had to disassemble it first to see what it needed and then order the parts. I received the pistol back this Wednesday and it is now working fine — thanks, Scott!

I have always heard that the LP2 has a weak valve that’s subject to failure. It was apparently corrected when the LP3 came out. Whether that is true or not I can’t say, because this is the first working LP2 I have seen and handled. I have owned two LP3s in the past. The first was the model that had the full target grips and the second one had the sporter grips that look like the grips on this LP2. I have seen several LP2s at airgun shows but they were always non-functional. read more

The LP2 was Walther’s first commercial success with a single stroke target pistol. It was produced from 1967 through 1972. Was there ever an LP1? There might have been, but if there was it didn’t last long enough to be officially recognized or to enter the market. read more 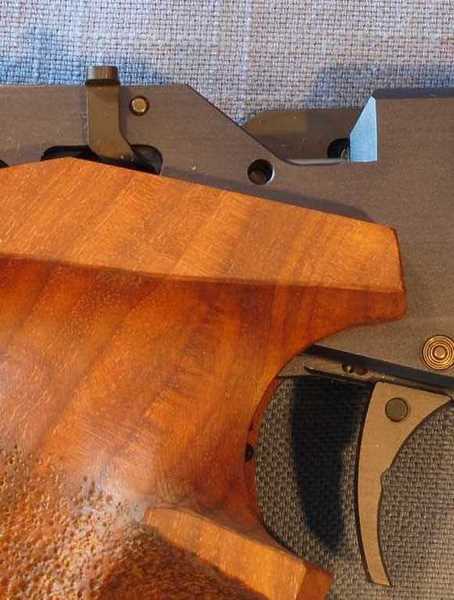 On the SAM 10 target pistol, the dry-fire lever at the top of the receiver is pulled back each time to cock the trigger. You can feel the sear release when the trigger is pulled; but since the hammer was not cocked, it doesn’t strike the valve and no air is exhausted. read more