Today we look at the accuracy of the FWB 110 recoiling target rifle. After seeing the velocity, I just had to see how she would do.

I shot the rifle from 10 meters with the rifle rested directly on a sandbag. Given the negligible recoil, that seemed best. I shot 5-shot groups so I could test more pellets, and I had a slew of them to test.

It took 10 shots to get the pellets hitting close to the center of the bull. When using non-optical sights hitting the center of the target is fine because I can’t see details from where I’m shooting. And the use of aperture sights front and rear means I can’t shoot out my aim point until the entire bullseye is gone. That ain’t a-gonna happen in 5 shots.

The first target was shot with RWS R10 Match Heavy pellets that were also used for sight-in. They went into a group that measures 0.219-inches between centers. Not a bad start! 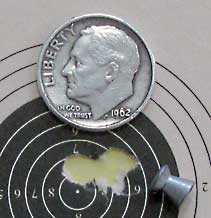 The pellets are fairly well-centered, but not perfect. If I was competing with this pellet I would keep refining the sights until I was shooting a 10 every time. But since I’ll be shooting other pellets, I decided not to adjust the sights after sight-in.

This wasn’t supposed to happen. These were supposed to be R10 Match Pistol pellets but I picked up the wrong tin. So this is a second target with R10 Match Heavy pellets. The group measures 0.104-inches between centers and is the smallest group of the test. It earns the celebrated gold dollar for size comparison. 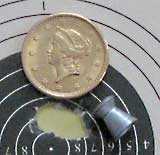 The second group of R10 Match Heavy pellets is less than half the size of the first group. It measures 0.104-inches between centers.

Why was the second group half the size of the first group? Who knows? All I can say is don’t try to explain it. It just happened. We need to shoot lots more groups to know anything for certain. At the end of this report I’ll discuss this pellet in this rifle a little more.

The third target was shot with five Sig Match Ballistic Alloy pellets. Five of them went onto 0.275-inches at 10 meters. I was also going to try some other lead-free wadcutters, but I didn’t on this day. 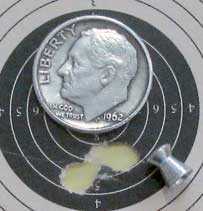 The FWB 110 put 5 Sig Match Ballistic Alloy pellets into a 0.275-inch group at 10 meters. Probably not right for this rifle.

The next pellet I tried was the Qiang Yuan Training pellet. Sometimes these do surprizingly well, but this was not one of the times. Five went into 0.347-inches at 10 meters. Ugh! 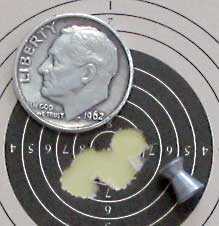 Does the FWB 110 recoil? Not really. Shooting at targets is really the only time this assessment can be accurately made.

When the rifle fires I feel a thump in the butt and there is a torque to the left that’s very consistent. But there is no real rearward or forward movement. I shot with my glasses next to the rear sight peephole and it didn’t move.

The fifth target was shot with JSB Blue Match pellets. I don’t shoot these a lot and when I do I haven’t found them to be equal to R10s and H&N Finale Match, but I thought I’d try them. Since I don’t know the FWB 110 at all I need to try different things. 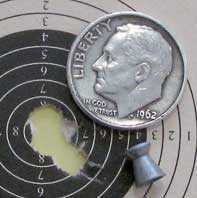 Five JSB Match pellets made a 0.234-inch group at 10 meters. It’s not terrible, but in light of what the R10 Rifle pellets did, it’s probably not worth pursuing.

The last pellet I tested was the RWS R10 Match Pistol. This is the one I thought I was testing on the second target. Five of them made a 0.366-inch group at 10 meters. It’s the largest group of today’s test. This is definitely not the pellet to use in the 110! 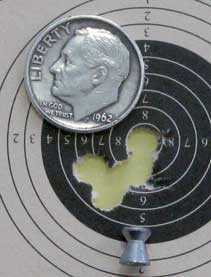 So far only the RWS R10 Match Heavy pellet has shown any real promise. I was going to shoot a final group of them but by this point in the test I was tiring. I didn’t want to bias things that way. And who is to say that the JSB group wasn’t also affected by that? I don’t know, but there are many other pellets I want to try, so for now I’ll just stick with the R10 Heavy.

Of all the groups shown here, the R10 Heavy gave me the two smallest groups. That says something on its own. In my opinion, the FWB 110 “likes” this pellet. I think I will keep on shooting them even as I test other pellets.

Since my FWB 300S is incredibly accurate with almost every pellet, I expected this 110 to be, as well. I don’t know why I would think that — I’ve owned FWB 150s that weren’t that accurate. I guess I was just hoping.

Talk about tiring! After 10 sighters I had to concentrate for every shot in this test! It sounds easy, and on some days it is, but not on this day. I really worked to get what you have seen.

I’m not finished testing the accuracy of the FWB 110 rifle. I have many more pellets I want to try. So there will be at least one more accuracy test before we open her up and dive inside. 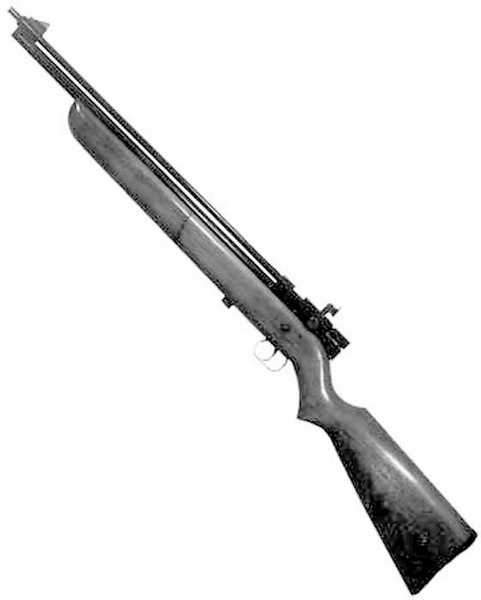