Well, today I have a few surprises for you as we take our second look at the Avenger bullpup from Air Venturi. Today will be the first of at least two velocity test days, and perhaps more, for reasons I will mention.

I shot the .25-caliber Avenger bullpup over the chronograph using JSB Exact King Heavy pellets.  They weigh 33.95 grains and you will remember that 671 is the “magic” velocity at which the weight of the pellet in grains equals the energy it generates in foot-pounds. That will help when we get to the velocity part.

The bullpup I’m shooting is a .25 and we know that caliber goes through a lot of air. But this is also an Avenger which we know to be quite stingy with air. So, how many good shots will we get from a fill?

That would be nice to know but my carbon fiber tank wasn’t quite full, so all I got into the rifle was 4,000 psi. That will be our starting point, so there will not be a shot count in today’s test.

Now, the two gauges on the rifle (regulator setting on the right side of the receiver and reservoir pressure gauge on the left) are identical. So, pay attention to what I tell you that you are looking at. The reg gauge was set at 3,000 psi when the rifle came from the box. Theoretically the gun will shoot on the reg from 4,000 psi down to 3,000 psi, then the shots will start going slower. 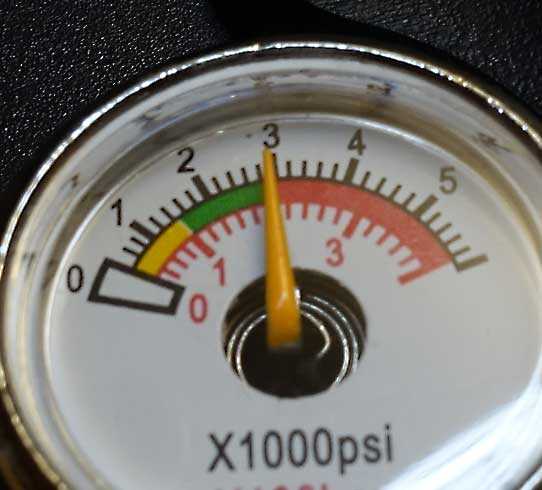 This is the regulator setting at the start of the test with 4,000 psi in the reservoir.

Okay, I wish I could do this in a slower more dramatic way, but if I do it will probably confuse you all. So here are the first 30 shots.

What we have at this point is a lot of shots on that high regulator setting. Forget the reg for a moment. The average of those 30 shots is 788 f.p.s. That produces 46.82 foot-pounds of energy with this pellet. Folks, that is a lot of shots at a very powerful level! This .25-caliber Avenger is a real thumper that gets lots of shots!

The maximum velocity spread for these 30 shots is 20 f.p.s. That’s not bad for this kind of power.

The pressure in the reservoir (NOT the regulator) had dropped to 2,200 psi by shot 30. So, by the 30th shot the rifle had to be off the regulator. Yet the velocity says that it isn’t. I have never seen a PCP hang on like this. Well, let’s shoot some more shots. 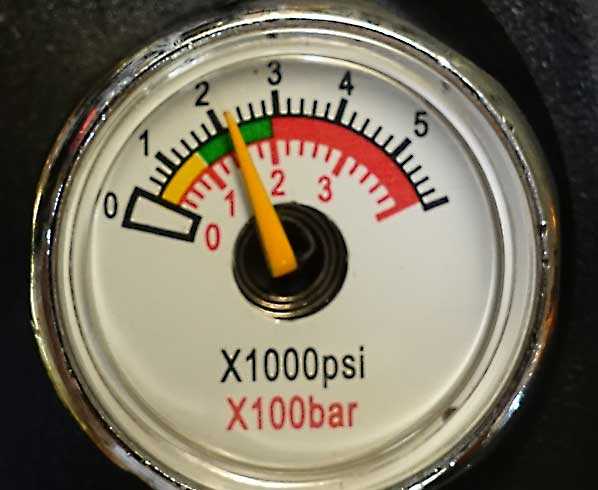 On shot 35 this is what the regulator gauge said.

I say that on this factory setting there are 35 good shots on the Avenger bullpup I’m testing and then it falls off the regulator like a stone. But why is the rifle still shooting its shots in a narrow power band? Is it possible that the regulator doesn’t really come set at 3,000 psi, but when you fill the rifle some air bleeds into the regulator pressure gauge and makes it read higher than it’s set? I don’t know the answer but in future tests I hope to adjust the regulator lower and see what happens.

Remember in Part One I promised you a huge surprise? Here it comes. On today’s first shot the rifle fired before I was ready.

It did that because the trigger on this Avenger bullpup breaks with just one pound, one ounce of force! That’s correct, sports fans, this bullpup has a 17-ounce trigger! Well, BB, did someone set this trigger up just for you? Perhaps. I have no way of knowing. What I do know is this is the best trigger I have ever tested on a bullpup and, yes, I have shot several Edguns whose triggers couldn’t compare. Maybe they weren’t adjusted well enough, but this one sure is.

It’s a single stage pull with no crisp breaking point, but don’t touch it until you are willing to let lead fly. You will feel some movement as you squeeze and then, Bam! the rifle fires before you are ready.

This is a note to myself because I had forgotten what the big surprise was for this report until the first shot fired before I was ready. Oh, yeah, the light trigger! What comes next is an adjustment of the regulator to a lower pressure to see what happens to the velocity. And I will fill the rifle all the way to 300 bar next time so we get a good shot count.

These Avengers continue to surprise me. I may not know what to expect (like the big shot count and the trigger on this one) but I know it’s always going to be good. There, readers — if you have been sitting on the fence on this one I hope I pushed you closer to the edge! Enable, enable. 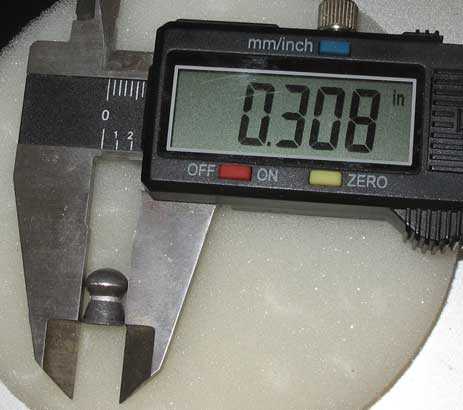