The Ronin airgun silencer from DonnyFL.

Today we’re going to look inside the Ronin airgun silencer from DonnyFL. This is a report I think you folks want to see.

After all the comments about the silencer in Part 3 of the Benjamin Gunnar report — the accuracy test — I thought you might like to look inside. This one is easy to disassemble, unlike my firearm silencer, so I thought, why not?

Reader shootski said the following, “The RONIN and other DonnyFL silencers are easily disassembled, “Take apart in less than 10 seconds by unscrewing the rear end cap and pushing back the mono-core. No hex key or torch needed when you want to perform maintenance inside the unit.

I don’t own a RONIN but wouldn’t describe the internals on my DonnyFL silencers as baffles (like on a Marauder or most firearm silencers) on any of mine.”

Okay, I knew it was easy to take this one apart so I did. Let’s see what’s inside. 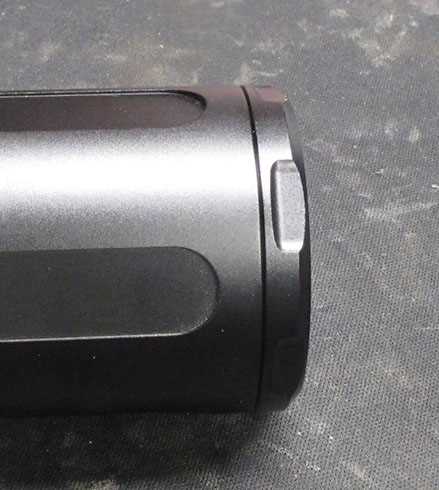 There are flats on the end cap of the Ronin that allow the use of a large spanner.

I used a pair of Channel Locks opened as wide as they would go with the jaws cushioned by a shop towel. Once I turned the end cap it came loose. It was just too tight for removing by hand. 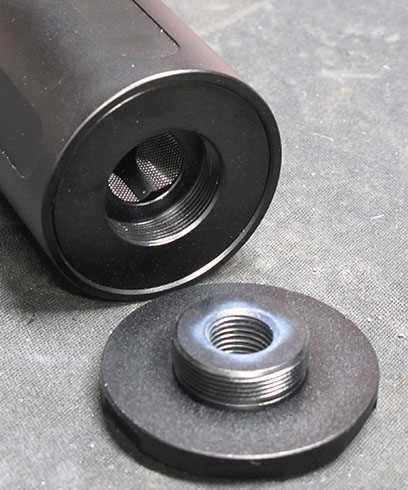 The end cap comes off. See the lighter area around the inside of the cap? This is where the term lead dust collector comes from.

Once the end cap is off all you have to do is push in on the other end of the silencer and the whole guts come out. 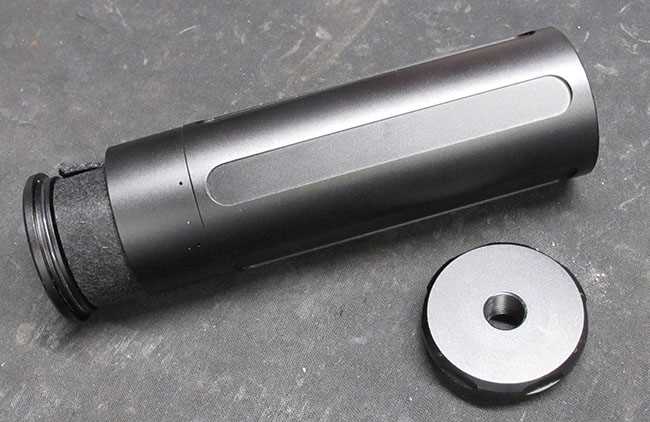 Just push on the other end of the silencer, the end the pellet comes out, and the inside pushes straight back and out the rear where the end cap was.

The guts of the silencer are wrapped with a felt blanket that dampens the sound as it tries to escape. This is one way to do it, but my firearm silencer doesn’t have this blanket. Probably the hot gasses would make short work of it. But an airgun doesn’t have hot gasses, so it works.

The guts of the silencer are wrapped with a felt blanket.

The felt blanket is held on by tape. Once it’s removed, it reveals a wire screen with thin mesh that’s wrapped around the baffles.

Under the felt blanket is a wire screen around the baffles. It’s held on by tape.

Shootski says he wouldn’t describe what’s inside the silencer as baffles. Well, I don’t know what else to call them. Yes, they are not separate pieces like we find in a Marauder shroud, but no firearm silencer I have ever seen had separate pieces. I’m not saying they don’t exist — just that I have never seen them.

Some firearm silencers that absolutely have to be silent are filled with petroleum jelly and have polyurethane disks called wipes that the first bullet shoots through and subsequent bullets push aside as they pass through. The petroleum jelly is good for only a couple shots before it has to be refilled and the wipes wear out quickly (30-40 shots), as well. These are the super-silent silencers called the “Hush Puppy” that are like what Hollywood shows us in action thrillers.

Okay, those Hush Puppy silencers are for “wet work” (assinations, etc.) that absolutely has to be quiet. Now let’s get back to the real world and the Ronin. 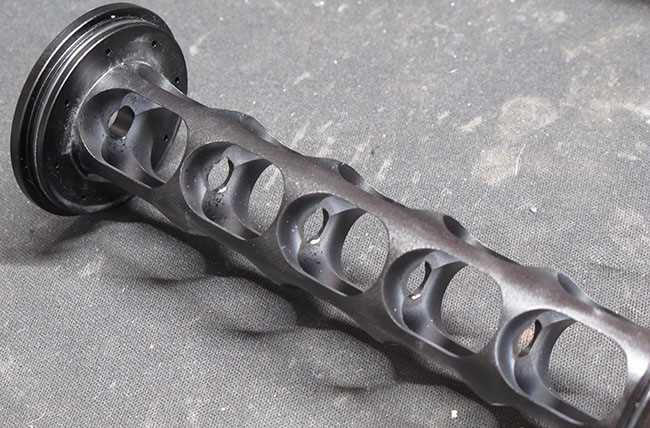 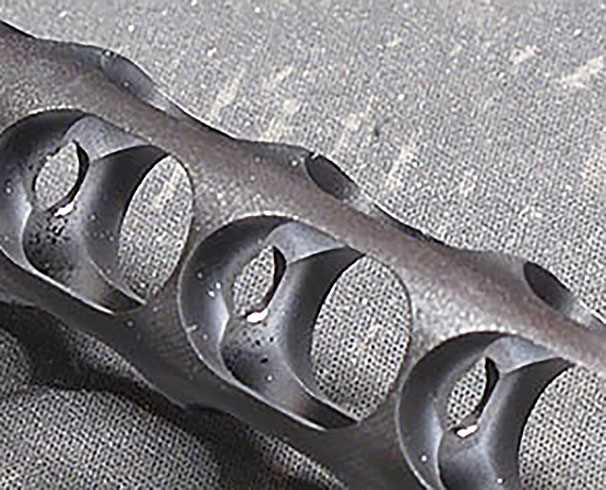 In this image you can see where the .22-caliber pellets nicked three of the baffles on their way out of the silencer. I have not used this silencer since the Gunnar accuracy test, so those nicks are what caused the rifle’s inaccuracy.

After taking all the pictures I assembled the silencer in reverse of the order in which it was disassembled. It went quick and easy and the entire job including photos only took 30 minutes.

I had to twist the internals to get them back into the can neatly. But it was easy.

This is where the guys who like to tinker step in and enlarge the holes through the baffles. Other guys say just keep shooting through it and eventually the pellets will clear their own path. I tend to be in the latter camp. I have several air rifles on which this silencer works well, and as I told you, the Gunnar doesn’t really need to be silenced. So I’m not cutting up the baffles in mine.

The DonnyFL silencer works well and just as it should. You have now seen the insides and possibly understand how it works a little better.