Home > Blog > Special/Unique > Training with a CO2 lookalike: Part One 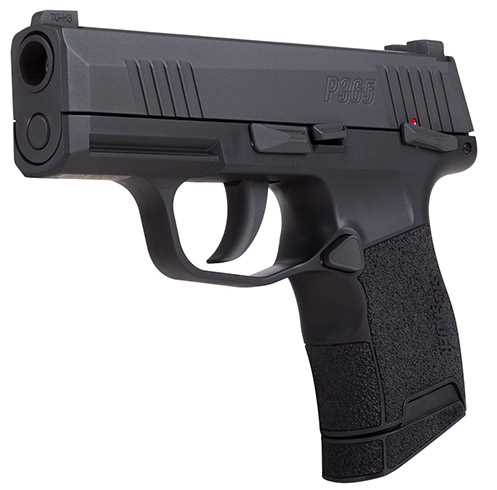 Oh boy, have I got one for you today! Today you’re going to see old BB training with his Sig P365 BB pistol!

You know those videos where Tyler Patner and I talk about airguns? Well, in the first one Tyler said something that resonated with me. He talked about the training value of CO2 airguns. I listened to what he and I both said and I thought — “Why not?” So, out came the Sig P365 BB pistol and a 12-inch Shoot-N-C target was pasted to the rubber mulch trap box and BB was off to the races. 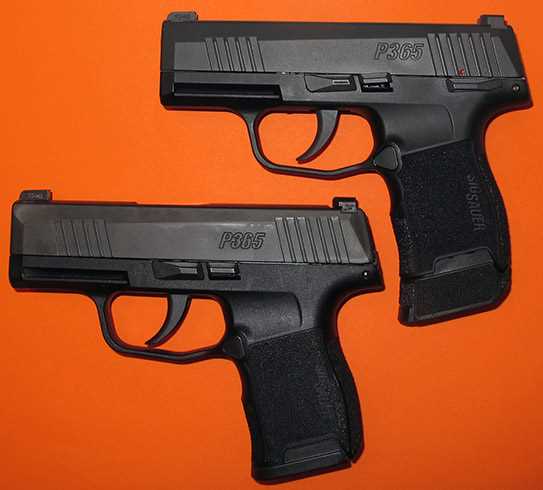 Apart from the holster wear on the bottom 9mm firearm and the longer magazine on top, these two Sig P365s are virtually the same.

It was so much fun! I stood 10 feet from the target that was pasted to the front of my rubber mulch box. How could I miss? I say that but until I tried it, I could think of all sorts of ways.

I put a new CO2 cartridge in the pistol with a drop of Crosman Pellgunoil on the flat tip and pierced it. Then I loaded 19 BBs into the double-stacked magazine. The Pyramyd Air website says the mag holds 12 BBs, but mine holds 19. Then I was ready to shoot.

I carry my 9mm P365 in a form-fitting leather holster made by Bullard of Cooper, Texas. There are many great concealed holsters on the market, but my neighbor, Denny, got a Bullard for his S&W carry pistol and showed it to me. After seeing how it worked I bought one. It costs about as much as the $90 BB pistol, but of course it is my concealed carry holster so I didn’t think about that. Does it work?

I don’t know if you have noticed or not but BB is somewhat full-figured. Never had a 6-pack, but now I have a keg or two. I had been carrying my 9mm P365 in an ankle holster, but they are cumbersome and slow to get the gun from. I also have a belly band which is an elastic band that goes around your middle and stays tucked inside your trousers. Again, slow to get the pistol from. The 2017 church shooting in White Settlement, Texas, shows the security man drawing and firing his pistol in seconds, killing the shotgun-wielding assailant. The man who saved the day is one of that church’s security team members and also a firearms instructor for the Texas concealed carry permit. What he did was classic and professional and it saved several lives, though two church members were also killed and the first one was another church security man. If you watch online you will see that the distance of engagement for the final shot was 20-25 feet.

BB is on the Watchman team at his church, for exactly this reason. He has been doing this for the past five years, but after this shooting he decided to upgrade his holster to one that is faster. Let me show you what it looks like. 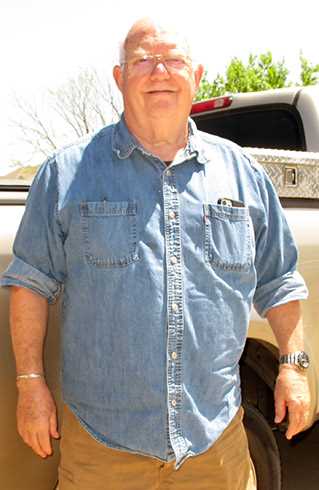 Just BB. Can you see where my pistol is? 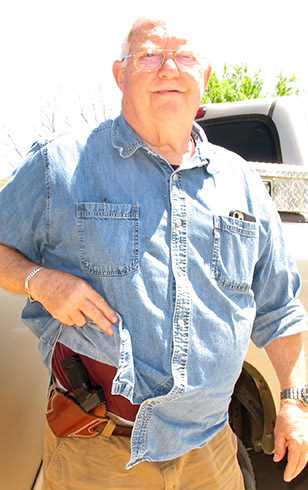 BB has worn his shirts outside his belt for years, as most fat men do. But now he has a real reason to do it!

When you come to my church BB looks like a lot of the other old men you’ll see. This is Texas, so about half the men are armed. Old BB blends right in. But if called upon, can he perform? After my discussion with Tyler, I wondered. Well, I have this P365 BB pistol and I don’t need to wonder anymore.

Oh boy, here we go! I stood 10 feet from the target, then I drew the BB pistol and fired two shots, which is called a double tap in the security trade. To my utter surprise, two things happened. I didn’t take aim (there was no time) and I put two rounds into the X ring! Both were surprising to me. Yes, BB shot holding the gun in both hands. I think for this kind of shooting that is essential.

I holstered the pistol and tried again, and again. I kept shooting this way until the slide locked back after the last BB. Let me show you the target. 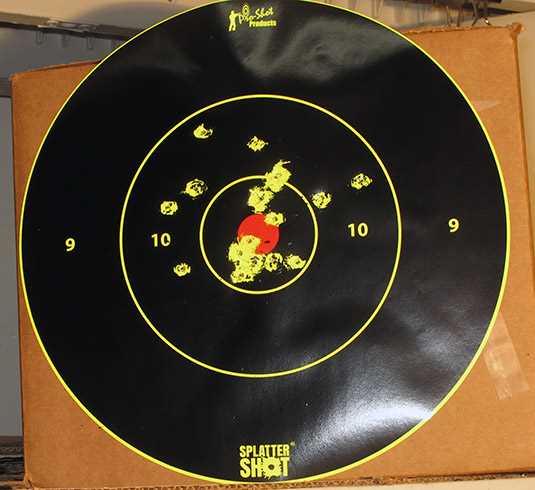 From 10 feet I kept all my shots inside the 10-ring, which is 7-inches in diameter. Most of the shots are in the X ring.

Wow! This was better than I expected, especially since I didn’t take aim. I pointed the pistol at the center of the target and, glory be, the shots went there!

I reloaded the magazine and took my stance at 12 feet, shooting at the same target. I did the same as before, draw from the holster and fire twice, then holster the pistol and go again. And even this time I kept all the shots inside or on the 10-ring. Wow! I had to go next door and tell Denny! 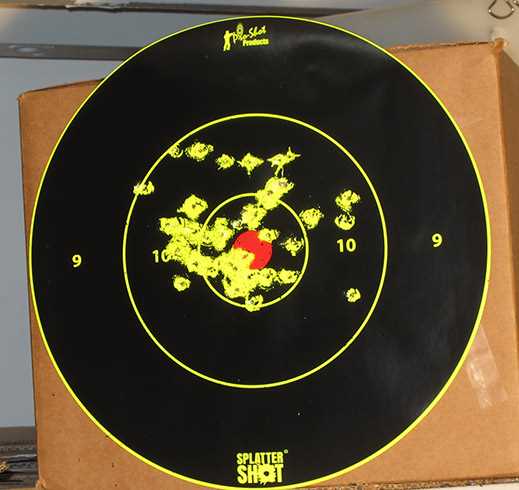 I shot the second magazine at the same target and again kept all the shots inside or just on the 10-ring.

When I showed the pictures of the targets to Denny and told him what I had done he laughed and said, “That’s cool! Is that target still up?”

We went back to my garage and Denny put up a fresh target, then he tried it with double taps just as I had. I offered to let him wear the holster but he declined. He just held the pistol down until he was ready to shoot each time. It took him about three times to get the hang of it, and all of his shots were from 12 feet. 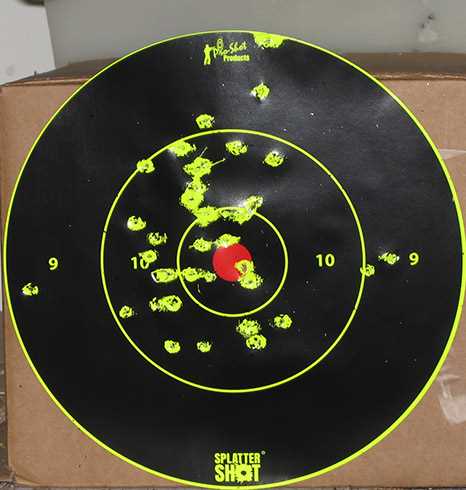 Denny’s target, shot with two magazines. The shot at the top was stopped by a synthetic cutting board I use to back up my mulch trap. I don’t show this to embarrass Denny (well, maybe just a little) as much as to show why a backer board is necessary.

When he saw what he had done he asked me how much the P365 BB pistol costs. I didn’t remember so I told him about a hundred dollars, but it’s ten dollars cheaper than that as this report is published.

I marked this report as Part One, so there is more to come. I think with practice I can keep all my shots on a 6-inch target at this distance. My garage will allow me to back up a couple more feet, and when I can shoot from there and keep them all in 6 or 7 inches, I’ll do that and show you.

I will also go to a local indoor shooting range where I will shoot my 9mm pistol the same way, only I won’t draw it from the holster. I’m sure the range has restrictions against doing that. If they don’t they should.

My plan is to show you guys all of this as it progresses. Denny has even asked me about him building a range like mine, so we are off to the races!

I have avoided doing this for years, thinking that it would be too unsafe. Well it isn’t. As long as you take the usual precautions of safety glasses for all in the vicinity and you back your target with a backer board the BBs can’t penetrate, things will be safe. 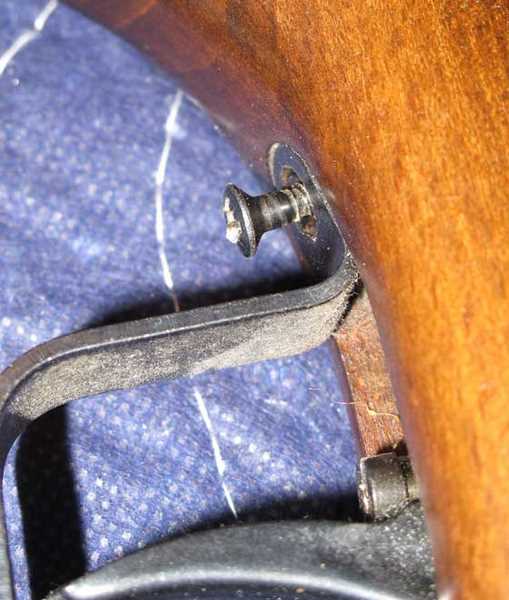