Would you please comment on “trigger over travel”.
It seems to be a big concern but I’ve never really worried about it.
Before all these adjustable triggers the trigger was what it was and you just had to learn it. Trigger over travel was common and I just considered it part of the follow through of the shot.
Maybe it’s just my archery background showing through… hold on target until the arrow gets there.”

Overtravel is the movement of the trigger after it releases the sear and the gun fires. On target guns you probably don’t want any overtravel. On some sporters you also don’t want any, while on others it’s okay, or at least not distracting.

What’s the big deal about overtravel? Well, it CAN cause the trigger finger to stop against the end of the pull after the gun has fired and that can cause the gun to move. Or if the airgun is light and the trigger is heavy the gun can jerk to the side when the sear releases and the trigger suddenly gets lighter. If that happens, it is the antithesis of follow through. I capitalized the word can, because it depends on many things whether or not it happens that way.

Let’s look at a target rifle trigger. I have a target rifle that is hands-down the most accurate .22 rimfire I’ve ever owned, seen or shot. It’s a Remington model 37 Rangemaster from before World War II, and it’s fitted with the “miracle trigger” that Remington once sold. Not all Model 37s have this trigger so I feel especially fortunate to have one.

This trigger has no perceptible movement and releases with just an increase in finger pressure. It’s much like an electronic trigger, only this one is all mechanical. What you do is squeeze the trigger until the rifle fires. The trigger doesn’t move, so it can’t impart movement to the rifle — as long as the shooter does his or her part.

Remington model 37 with the miracle trigger.

The rifle has a Redfield 3200 target scope. It magnifies 24X and has parallax correction down to extremely small increments out to 50 yards. With its peep sights I have put five .22 rimfire rounds from this rifle into a quarter-inch at 50 yards. But I used the rifle in one of my reports to demonstrate a point — namely that .22 rimfire ammo is just as subject to be accurate or inaccurate as pellets. I needed a rifle that was as accurate as possible. 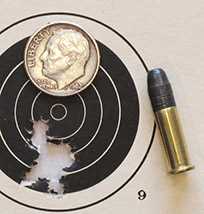 So, Hank, the miracle trigger was created to eliminate all possibility of trigger overtravel, because, from the shooter’s perspective, the trigger blade doesn’t move at all. It probably has to move a little, but I cannot feel it. It feels weird until you get used to it and then you wish all triggers worked that way.

Now, as far as I know, Remington patented the miracle trigger and it was never used on any other target rifle beside the model 37. And there is good reason for that. If the overtravel stop screw of a conventional target trigger is adjusted perfectly on a non-miracle trigger, the effect is identical. The “problem,” if there is one, is adjusting the overtravel stop screw perfectly. Adjust it slightly too much and the trigger becomes much heavier to pull. Go a little farther and the rifle won’t fire at all.

Then reader Roamin Greco chimed in and said:

“What I think is happening for me is that the Crosman trigger is rather heavy, so at the shot, the trigger suddenly lurches back. Even on a sandbag, sometimes, the movement of the trigger occasionally causes me to pull the shot. I originally thought it was the ever so slight motion of the hammer, but the more I shoot it, I think it is my fault of putting too much meat on the trigger plus the overtravel. Last night I saw the 362 sights clearly move left at the shot, spoiling an otherwise very nice group. I am very interested to see BB.’s report mañana.”

Wow! You guys are writing this blog for me! “Lurching” is exactly what the lack of an overtravel screw does. The trigger finger suddenly moves back when the rifle fires and the trigger gets lighter or it moves a little more and stops at the end of the travel. Either thing moves the gun.

Yes, pistols are affected by overtravel just like rifles — even more so if they are target pistols that are shot with one hand. So the best target air pistols have adjustments to compensate for overtravel. And learning to follow through is even more necessary with a pistol than with a rifle — especially an air pistol. 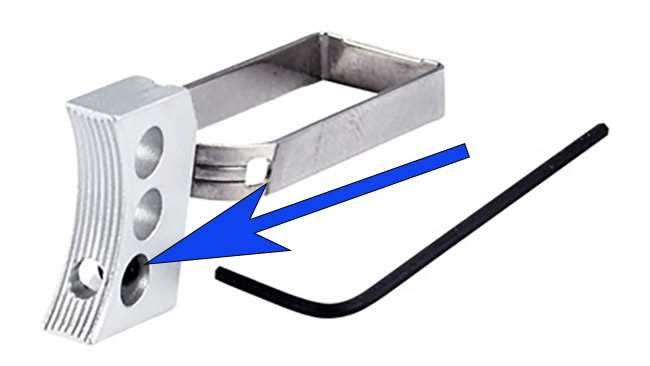 On this Wilson Combat 1911 trigger above you adjust the screw (arrow) until it just releases the sear and stops. No overtravel!

I said in the beginning that some sporting rifles can use overtravel stops while others don’t need them. If the release of the sear or striker is smooth enough, or if the rifle is heavy it doesn’t matter so much if the trigger moves afterward. With rifles like this, you don’t really notice the lack of an adjustment. A large part of the reason is that with such rifles you aren’t trying to put pellet upon pellet. They aren’t capable of it even if you wanted to. If you hit the can that’s good enough. But when precision matters, then the trigger comes into play.

Did I answer the question?

Hank — was that what you wanted to see? Or is there something else I didn’t address?