Today we shoot the Crosman Challenger 2009 PCP target rifle against the AirForce Edge. There is a lot to see today so let’s get right to it.

I knew there would be some things to do before the shooting started and number one was to depressurize the Challenger 2009 PCP. I had mistakenly filled it to 3,000 psi when it’s not supposed to go above 2000 psi. Although nobody remembers this, the old Challenger was supposed to be a dual fuel air rifle that could also be filled with CO2. So the firing valve had to be set to operate at a lower maximum air pressure, because CO2 runs under 900 psi most of the time. 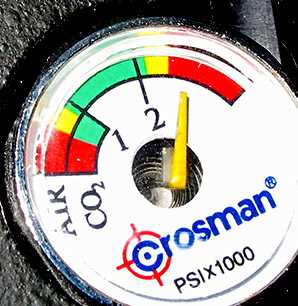 The Challenger PCP was overpressurized.

I couldn’t find the degassing tool, so I just dry-fired the rifle 100 times until the gauge dropped into the green. That’s supposed to be 2000 psi. 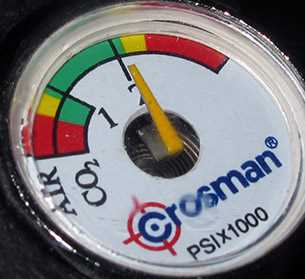 After 100 dry-fire shots the pressure in the Challenger reservoir is down to where it should be.

I shot the Challenger with the new sight system from Crosman. I’ll comment on them as we go.

Edge had no rear sight

The Edge had no rear sight. I had removed it and mounted it on the FWB 600 when my FWB rear sights failed to get the rifle on target. I’m still messing with that problem, though the Edge rear sight fixes everything. Fortunately the last time I had that sight on the Edge I recorded where it was set on the vertical post. That enabled me to mount the sight and shoot into the bullseye on the first shot — though there was some sight-in required. 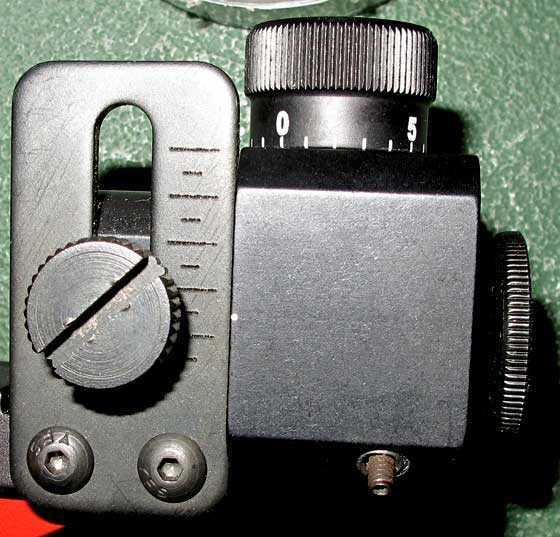 The Edge rear sight was adjusted with the white dot about even with the third mark up on the post. After that all that remained was to refine the sight adjustments.

I filled the Edge to 3000 psi, which is correct for that rifle. It has a smaller reservoir, but gets about the same number of good shots on a fill because of its regulator.

I fired both rifles off a sandbag rest at 10 meters. Both rifles were rested directly on the bag. I shot two five-shot groups with each rifle after they were sighted in.

Both rifles had performed their best in the past with the same pellet — the Qiang Yuan Training pellet. I will tell you what the best previous group was for each rifle as we go. Let’s begin.

The Challenger’s trigger is two-stage and light. Stage two isn’t as crisp as I would like. I can feel some movement, though there is no real creep.

The Crosman sight system has inserts with a bar on either side of the front aperture. That helped me level the rifle for each shot. And, as you can see, the rifle is zeroed perfectly.

The second group of five Qiang Yuan Training pellets went into 0.204-inches at 10 meters. It was just over the limit for a trime comparison coin, so it got the silver dime.

The second group of Qiang Yuan Training pellets from the Challenger went into 0.204-inches at 10 meters.

Now it was time to shoot the Edge. The Edge is more ergonomic than the Challenger, so it is harder to shoot off a rest. It’s made to be held offhand.

As I said at the beginning, the Edge was also most accurate with the Qiang Yuan Training pellet. On June 16, 2020 five pellets went into 0.161-inches at 10-meters.

The first group of five pellets in this test went into 0.27-inches at 10 meters. That’s certainly larger than what the Challenger PCP did.

The first group shot by the Edge measures 0.27-inches between centers.

The Edge trigger is magnificent! Stage one has almost no resistance. Stage two is  as crisp as a glass rod breaking. It’s been modified to this level and it’s a trigger worth trying!

The second group the Edge shot measures 0.281-inches between centers. It was also shot with the Qiang Yuan Training pellet.

The second group shot by the Edge at 10 meters measures 0.281-inches between centers.

Well it’s pretty obvious that the Challenger 2009 PCP buried the Edge in today’s test. The Edge is more ergonomic, more adjustable and has the better trigger, but the Challenger is more accurate today. That has been the historical record as well.

There is your second shootoff between 10-meter target rifles and this one has a clear winner. Was there anything else I was supposed to test with these two?