Today we return to look again at Sig’s Virtus PCP air rifle. The first four reports on this precharged pneumatic rifle (PCP) were back in 2020. Then, a couple weeks ago for reasons I don’t understand, Sig sent me another Virtus to test. So I will look at this one with fresh eyes — as if I never saw one before.

You read that right — the Virtus is made in Japan. I remember dialog from the movie, Back to The Future 3 when Doc Brown tells Marty, ” No wonder this circuit failed. It says made in Japan.” To which Marty replies, “What are you talking about, Doc? All the best stuff is made in Japan.”

The Virtus is a .22-caliber 30-shot semiautomatic PCP repeater. And .22 is the only caliber it comes in. It copies Sig’s MCX Virtus Patrol, a 30-round 5.56mm battle rifle that’s designed for special operations. One tester said if his AR-15 was a Honda Civic, the Virtus Patrol was a Lexus. That writer said the Virtus had a softer recoil, though the 5.56mm cartridge is hardly known for its recoil, but the Virtus’ short-stroke piston allows the elimination of the buffer tube that the AR’s direct gas impingement operation requires. I own an AR-15 and can tell you that buffer tube is a weak spot in the design, because:

A. the buttstock will nearly always work loose and rattle and

B. the buttstock cannot be folded to the side, while the Virtus buttstock can. If you have ever ridden with a small crew inside an armored vehicle, saving length on your rifle is a desirable thing. It’s one place where the AK platform has it over the AR-15/16.

Yes, BB knows there are AR butts that allow side folding today. They are workarounds, but they do exist.

However, this Virtus PCP we are examining has a 213 cc air reservoir in its butt, so the buttstock neither folds nor adjusts for length of pull. What you get is a 13.5-inch length of pull. The barrel is 17.5-inches long and the overall length of the rifle is 37.5-inches.

The air rifle weighs 7.5 pounds empty. The firearm weighs 7.9 pounds empty, so pretty close there. I will explain the possible small difference later.

The firearm is extremely modular — to the point of surpassing the AR platform. Caliber and barrel length changes are performed quickly by the user, which is one huge reason for anyone to spend over $2,200 for the basic platform. ARs, often called Lego guns, can also change calibers and barrel lengths, but only by swapping out entire upper receivers.

The air rifle is not modular at all. It’s a .22 caliber PCP and that’s it.

The Virtus PCP has iron sights that fold down when optical sights are used or up when you want them. The front sight adjusts for elevation and the rear sight for windage — just like their military firearm counterparts. Unlike the military M16 front sight that requires the pointed tip of the bullet in a loaded cartridge to adjust the front sight up and down, the Virtus comes with a handy front sight adjustment tool in the pistol grip. I always HATED that M16 front sight adjustment, and thankfully, people who actually shot rifles eventually changed the rear sight to make it adjustable for both windage and elevation. That is the way it’s done, folks — I don’t care what cereal box you got your rifle from! 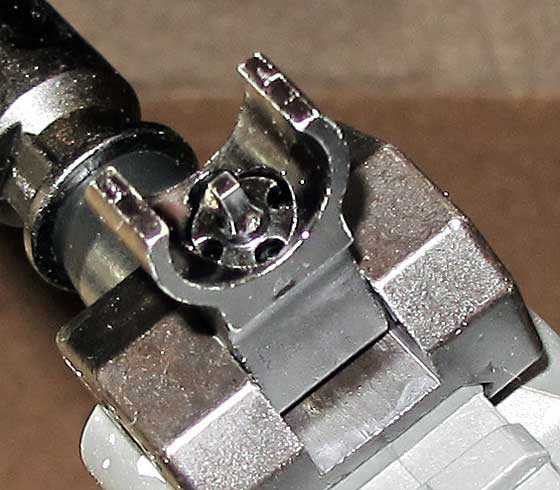 The front sight adjusts up and down for elevation. 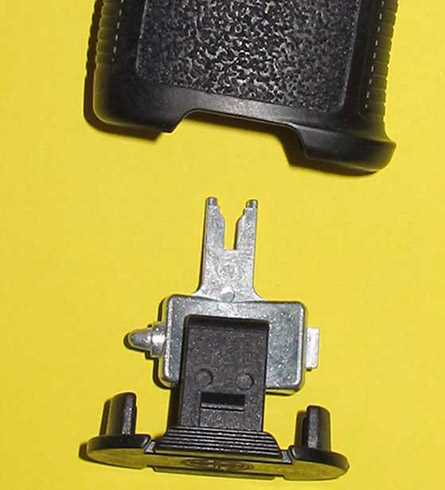 A combination tool in the grip is for adjusting the front sight, adjusting the rear sight, tightening the Allen bolt that attaches the buttplate to the reservoir and loading the belt magazine.

I will attempt to sight in this air rifle at 10 meters with the open sights. I discovered back in 2020 that I could not get the iron sights to hit the aim point at 10 meters. The rifle I tested back then hit 6 inches below the aim point at 10 meters. Adjusting the front sight post down as far as it would go brought the group up to 2 inches low. I will approach this test as though I am not aware of this previous issue. And I want to say right now to everyone who said fixed barrel spring guns are better than breakbarrels because they don’t shoot low — YOU MISSED IT! Fixed barrel rifles also shoot low, as do bolt action firearm rifles. Shooting low is not because of the breakbarrel pivot point. It is something that most rifles, be they pellet or firearm, do.

Yepper, the Virtus has a lot of plastic in it. I will now switch over to the more acceptable word — synthetic. Still, this stuff looks like good stuff and I doubt it will be a problem. The firearm has aluminum where the air rifle uses synthetics (forearm/frame and Picatinny rail), and that might be where the additional five ounces of weight come from.

But guess what? Because of its construction the Sig Virtus PCP retails for $280. It is well under the price point PCP limit of $300, that BB recently raised to $350.

But because of the synthetics you’ll want to be careful tightening those accessories that attach via the M-LOK slots that are found everywhere on the forearm. Just don’t get stupid.

Okay, BB is closing his eyes at this juncture. The last Virtus air rifle I tested had a heavy trigger that is used to advance the 30-round belt magazine. Because of that I had difficulty wringing out all the accuracy that rifle offered. This time we shall see. Remember, I’m doing this with fresh eyes, so let’s hope something has been done. 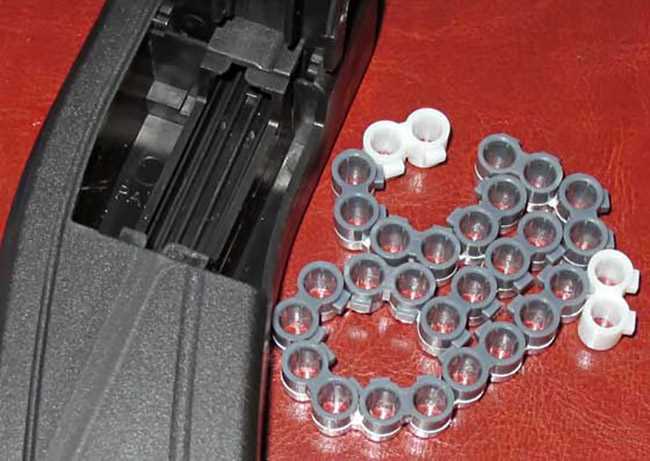 The Virtus uses a 30-round belt for the pellets. The white chambers tell you where you are in the belt.

Sig wisely limited the fill pressure to 3,000 psi. That means that the reservoir will not drain your air tank or overburden your compressor. It also means that filling from a hand pump is possible.

The small size of the 13 cubic-inch reservoir, coupled with the air regulator means you should be able to physically handle the task. And the maximum energy of 12 foot-pounds means that there should be plenty of shots available. Plenty!

Well, that’s it — a fresh look at a PCP that we saw two years ago. Let’s see how this one does