Today I mount the Romeo5 dot sight on the Sig Virtus and shoot it for accuracy again. This will be a test of both the sight and the rifle in operation.

I mounted the Romeo5 midway up the Picatinny rail, where both the dot and the target are easily visible.

Sighting in the Romeo5

I started at 12 feet as I always do with optical sights. The first shot went low and left so I adjusted the Romeo5 adjustments up and right. After 4 shots and adjustments in between I felt confident to move back to 10 meters.

I will say this, the sight adjustments worked perfectly, and like most dot sights the Romeo5 adjusts quickly. I sighted in with the dot on full intensity, but dropped four levels of illumination when shooting the targets. That 2 MOA dot is extremely precise, and you want it just bright enough to see with no flare!

I shot the rifle off a sandbag rest at 10 meters — the same as I did in part 3. I’m still shooting 5-shot groups so I can try many different pellets.

I remembered my trigger trick, which is to pull with the second joint of my trigger finger rather than the tip. That gives me a lot more power and I can control when the rifle fires much better. I feel a scrunch as the belt advances, then an increase in pressure just before the rifle fires. It’s like stages one and two of a double-action trigger pull.

I ran through a bunch of pellets today before discovering that my trigger finger was pulling the rifle off the target again. Now, under no circumstances is the Virtus to be considered a target rifle. It is a fast-firing 30-shot pellet repeater that gets a large number of shots from a 3,000 psi fill. It’s for fun and plinking — not for targets or hunting. But I have to show you something when I test it, and targets are still the easiest way to do that. What I’m saying is I think that any of the pellets I shot today are probably okay, but I’m not showing the ones I think I messed up. Of the groups that I do show, all three pellets performed about the same. The Virtus doesn’t seem picky about what it shoots.

I’m not going to waste your time looking at poor groups that I caused. Instead, let’s look at groups made by three pellets that did work well because when I shot them I was concentrating on not moving the rifle.

First up is the Air Arms Falcon. I will show you two targets that were shot, but many targets were shot with other pellets between these two groups. Once it was sighted in the Romeo5 was not adjusted for any of the different pellets, which will become important in a moment.

The first target shows five Falcon pellets in a group measuring 0.746-inches between centers at 10 meters. The group is slightly to the left of center, but since I was shooting many different pellets I did not change the settings on the Romeo5. 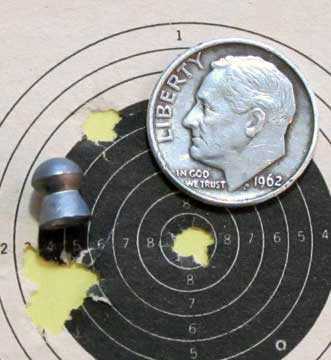 The second group of Falcons was fired perhaps 15-20 shots after the first one. This time five pellets went into 0.665-inches at 10 meters. The interesting thing is they are in the same place as the first group — so this is almost like shooting a 10-shot group. This is why I told you that I didn’t adjust the dot sight. 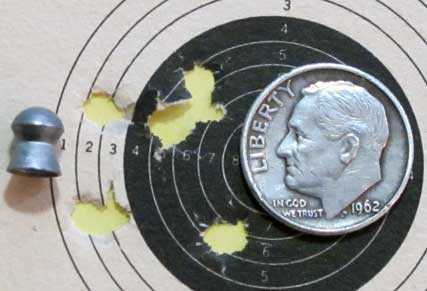 The second group of five Falcons went into this 0.665-inch group at 10 meters.

Next I tried the Air Arms dome that weighs 16 grains for the first time. The first group was well-centered in the bull and measures 0.583-inches between centers at 10 meters. For some reason this pellet just seems right for the Virtus, and this group is the smallest of the test. 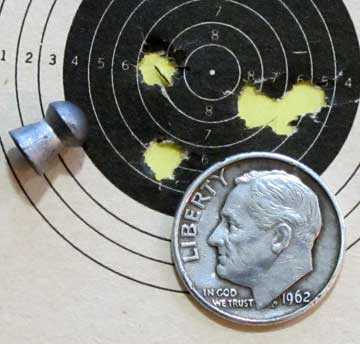 The second group of the same Air Arms domes was shot at the end of the test. It is the largest group that I’m showing, though the other pellets I didn’t show grouped much larger than this. But as I said, I think they were all my fault. I show this one because this pellet went to the same place on the target both times and this time five went into 0.847-inches at 10 meters. 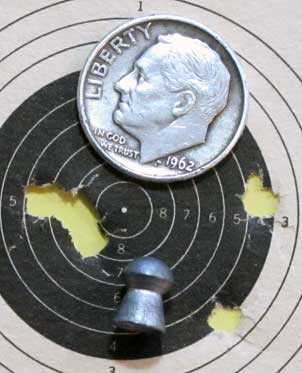 The final pellet I’m going to show you is a wadcutter. The RWS Meisterkugeln grouped surprisingly well, with five going into 0.776-inches at 10 meters. I did not shoot a second group of these because by this point in the test I was getting tired.

The Virtus put 5 RWS Meisterkugeln into 0.776-inches at 10 meters. I know it looks like only four shots, but that one large hole on the lower left actually holds three pellets.

I have now put the Sig Virtus MCX PCP air rifle through its paces. It’s a smooth, fast-firing pellet rifle that uses air very sparingly. It’s a very close replica of the Virtus firearm, for those who like replica airguns.

Early on I learned how to pull the trigger for the best results. I advise you to try my method if you have this rifle or one of the CO2-powered Sig MCX rifles it was spawned from. The 30-round belt fed magazine works perfectly .

The Romeo5 XDR red dot sight is also quite a performer. It’s a quality optic, and I am glad I had the chance to test it.