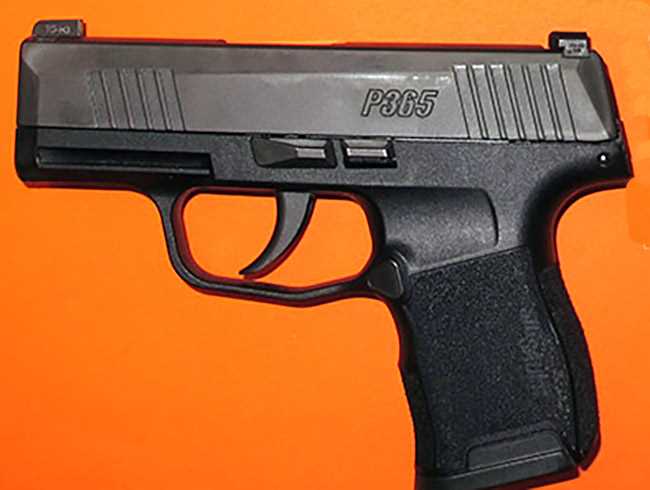 This is the follow on of the first report of training with a CO2 lookalike pistol. I was out at the range to see if I could shoot my 9mm Sig P365 firearm as handily as I shot the lookalike BB pistol in Part One.

I was supposed to keep training with my BB pistol before attempting to shoot my firearm. Well that didn’t happen. I will say that my neighbor, Denny, who goes by the handle Sawdust on this blog, did start training with his Sig M17 P320 BB pistol in his garage, and he even got his adult boys involved. They all found it to be great fun, plus Denny built a rubber mulch BB trap for his garage. Denny and I influence each other a lot, but he is definitely ahead of me in the influencing competition, so any time I can get one over on him like this I feel great.

Anyhow, I was out at the range to test my Makarov firearm, and I brought my P365 along with the concealed carry holster — the same one I showed you in Part 1 and used for the BB gun exercise. This was just to see if I could draw and fire accurate 9 mm rounds in a minimum of time.

I am on my church’s Watchman team. We are guards protecting those in attendance. It’s a sad commentary on the state of affairs that such a team is required, but with the school and church shootings in the recent past, most churches now do this. Since I live in Texas where it is a constitutional right to carry a concealed weapon if you are 21 years old and may legally possess a firearm under federal and state law, about a quarter to a half of the men in church are carrying and about 10 percent of the women carry as well. In Texas a woman often buys an expensive purse, just to get a concealed carry holster inside. My wife, Edith, had such a purse and carried her .45 ACP Glock 36 everywhere it was legal.

Drawing a firearm from a holster when firing live ammo at a target has several elements of danger. With the old single action revolvers the fear was you would shoot yourself in the foot or leg when you drew the gun. Quick draw shooters who compete on time used to have steel shields on their holsters to prevent this from happening — or to lessen the damage when it did. Because with quick draw it’s not a question of if this will happen but of when.

When I was a kid I shot myself in the leg with a Crosman SA6 pellet gun while drawing it fast, and the marshal at Frontier Village amusement park where I worked in the 1960s fired a blank in his holster on a stunt gunfight draw and tore open the right leg of his wool trousers, leaving a huge bloody strawberry down his leg to his boot. Our blanks contained no less than 40 grains of black powder and really made a ball of fire come out of the muzzle. 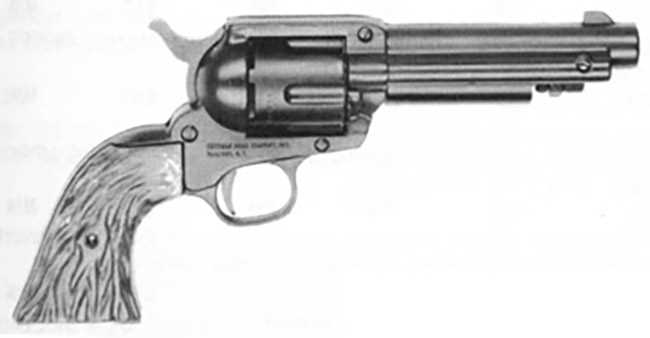 Once drawn you have to be careful where that handgun is pointing. When drawn in normal time this isn’t a problem, but as I practiced at the range I noticed that a couple times the pistol got a little crossways in my hand and I had to slow down and regrip the gun. In the White Settlement church shooting several years ago the first guy had less than three seconds before he was shot. He was already drawing his pistol but wasn’t fast enough. The second guy who was unarmed had about three to four seconds and then the guy who ultimately killed the shooter got him in about five seconds. That guy shot from about 25 feet away, so the 21-foot engagement distance is just a rule of thumb that’s given.

The point is, make haste slowly and deliberately. And don’t practice this drawing and shooting on a firearm range that’s populated. This is something you’ll want to do by yourself, or with as few others as possible.

Since this was the first time I tried this with live 9 mm ammo, I decided to take things slower and to be more careful. So I stood 21 feet from the target, which was a 6-inch Shoot-N-C bull.

I stood still, then pulled my shirt up and drew the pistol from the holster. I moved to a 2-hand hold and shot two times on each draw. I would like to say that it was a double tap, but the truth is, it was two distinct shots that were fired about a half second apart.

The front sight of my P365 is a wide post with a green Tritium bead in its center. There are two small dots on either side of the rear sight notch, but I discovered on the first attempt that the front sight was all I could see. So I covered the bull with it and fired twice. 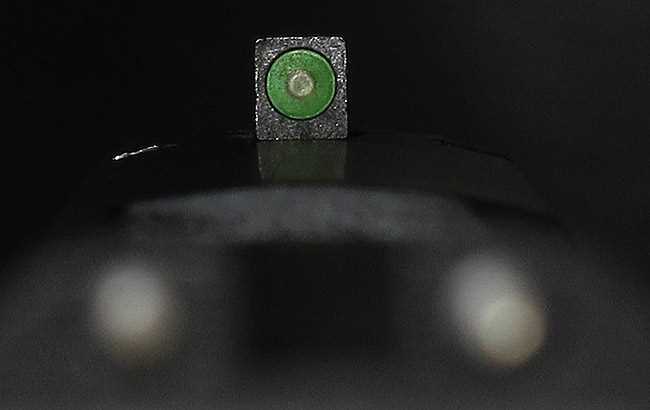 This is exactly what I see when I point the pistol, except I don’t pay any attention to the two fuzzy dots below. I just put that green dot on what I want to hit and fire away.

To my amazement, both of those first two shots hit the paper within inches of the bull. They were a little to the left. I shot again and got two in the bull. I shot again three more times, though on the last engagement I only fired once and the pistol ran out of ammo — or so I thought.

Here are my first nine shots.

When I went back to the 15-yard shooting bench to change magazines I discovered there were still two cartridges in the magazine that was in the gun. The follower seemed to have tilted forward and jammed down, short of the top of the mag. I played with this magazine a little and decided it was bad, so I switched to my second magazine to continue.

I keep both magazines loaded all the time. They hold 10 rounds, but after I load the first one I jack a round into the chamber, leaving 9 in the magazine to keep some pressure off the mag spring. Until this moment I thought I was doing the right thing, because military mags for the 1911 can be kept loaded full for many decades (I’ve seen them last as long as 50 years) and still function reliably. But not my Sig P365 mags!

When I returned home I went online and discovered that the P365 mag uses music wire springs that are apparently too thin for longevity. Being thin they hold lots of cartridges, but they sometimes do not last. That is unacceptable. So I ordered two new non-Sig mag springs that are 5 percent stronger, and best of all they are of a different alloy.

Many Sig P365 owners report no problems with their magazine springs, but several do report the exact problem I had (the plastic follower tilting forward and sticking short of the top of the mag). Since I am staking my life on them, I am taking no chances. I have shot this pistol about 1,000 to 1,200 times and this is the only problem I’ve ever had. I’ll deal with it and keep shooting, but if it crops up once more I will switch carry guns.

This wasn’t a bad thing. Finding this out in practice was far better than finding it out in a real engagement!

Back to the training

Denny was with me and put a stopwatch on me as I drew and fired from the second magazine. From the moment he said go I took three and a half seconds to draw and fire the first two shots. The next draw was 3 seconds because I sped up. That was a mistake.

On the next two draws I found the pistol sitting on an angle in my hand and I had to shift it to get a good grip. On one first shot I put the green dot to the right of the bull, hoping to hit the bull because I was pulling my shots to the left, but all I did was shoot one to the right of the bull. That was both intentional and also the last time I did it!

What I need to learn to do is slow down just a bit and concentrate on the target more. That will come with more practice that I will do next time from 25 feet back. I will say that the recoil of this pistol is so light that it’s almost like shooting a .22. It points as nicely as the BB gun, though the big green dot on the firearm’s front sight is a real benefit. 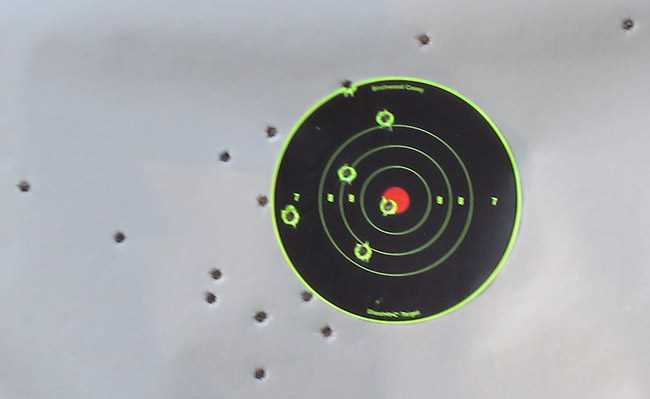 The second magazine was 10 shots into the same target as before. The shot that’s high and right was intentional. I thought I would try to aim right and pull left into the target but it didn’t happen.

On the last engagement I drew and fired a double tap that surprised even me. I have never done one before and was surprised how fast I got the second shot off — perhaps two shots in a quarter second or less. Even more surprising was they were on target, meaning in the bull! Poke me with a fork — I think I’m done!

I don’t think this “series” is finished, though I’m not sure where it will go next. I kinda think I need to do more BB gun training to be ready for the next trip to the firearm range, but I don’t know that there will be anything interesting in that to write about. We shall see.